SEMO’s Esport Varsity Apex squad competes in the last qualifying round of ALAC tournament, falls short of qualifying for finals 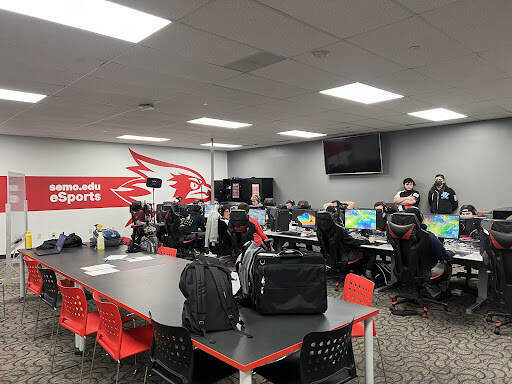 SEMO’s competitive Varsity Apex squad competed in the last qualifying round April 1 to determine if they would enter the finals of the ALAC tournament.

The five, 25 minute matches were highly competitive and had plenty of nail-biting moments, with SEMO’s team winning the fourth match.

Matches one and two showcased freshman business management major Jesse Brewster’s ability to perform under pressure when he eliminated two opponents while his teammates were down and in low health.

The varsity team approached the matches with their trademark cautious and defensive playstyle with a hint of aggression when they felt it was needed. They chose characters whose abilities best suited their playstyle and made sure to constantly communicate with one another.

Sophomore general history major Maddie Snider explained the importance of utilizing constant communication and how valuable it is when exchanging valuable information about what is going on in the match.

“In one of our first games tonight, when Jarod and I were down, we used pings to communicate and exchange information that helped Jesse locate the enemy team,” Snider said.

Snider believes this communication helped them win multiple fights against other squads and while also helping them gain much needed kill-points that contributes to their placement in the matches.

Although the team typically places an emphasis on avoiding other players, freshman cybersecurity major Jarod Baker explained part of their game plan was understanding their opponents.

“Going into the match I felt that understanding our opponents’ playstyle will better prepare us to go for the win. Most of our games that night were good but not the best of course,” Baker said.

Jesse Brewster elaborated on the team’s strategy when facing opposition during the matches.

“We played both aggressively and passively while trying to take advantage of other teams who were in the middle of fights,” Brewster said.

The varsity squad placed in the top seven for all five of their matches, after their wins the squad was still eliminated from participating in the finals since they failed to place higher than the other teams. Despite the loss, the team said they had a lot of fun competing.

This could potentially be their last competitive match for the semester, but the squad plans to take advantage of their down time by practicing team strategies and individual skills for the rest of the semester.