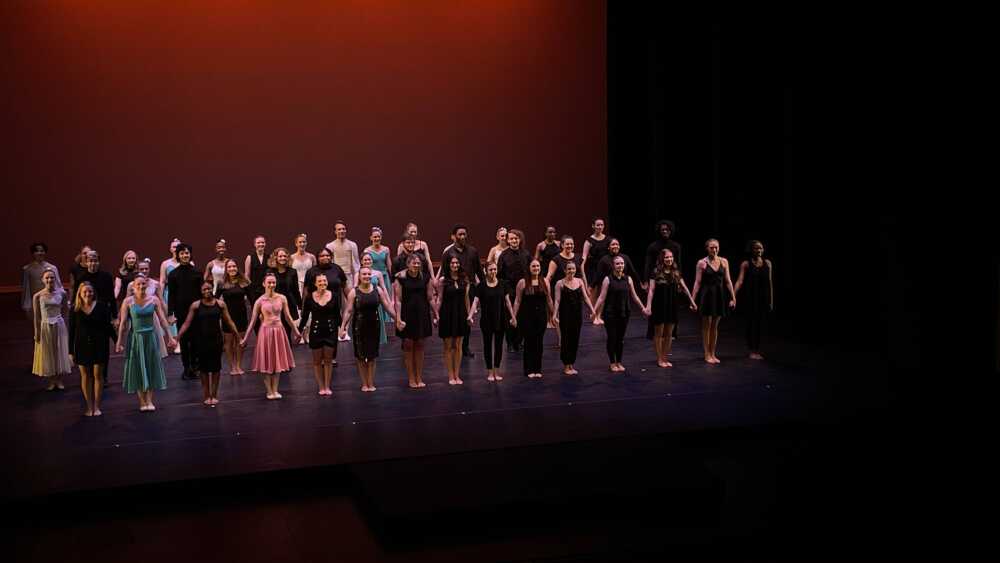 The dancers from Spring into Dance stand as the audience applauds their performance. The performance opened at 7:30 p.m. on Thursday, April 7.
Photo by Gina Williams

The annual “Spring into Dance” recital opened with their first performance at 7:30 p.m. April 7 in the Donald C. Bedell Performance Hall at Southeast’s River Campus.

The recital was directed by assistant professor and dance coordinator Hilary Peterson. It lasted approximately an hour and a half, featuring 10 separate dance pieces.

Peterson said auditions for the event took place at the beginning of the spring semester in January, and rehearsals began immediately. The dancers had rehearsal five nights a week for a couple of different dance pieces, depending on how many they were in.

“We had two guest artists that came in for week-long residencies that several of the dancers were involved in, so [those times were] kind of these intense periods of time where they were in rehearsal from 6 p.m. to 10 p.m.,” Peterson said.

“She’s actually a friend of mine back from graduate school, and it's really wonderful having the guest artists come in,” Peterson said. “They bring just a different sensibility about them — new information, new materials — and it’s always a wonderful opportunity for the students, ” Peterson said.

“The dancers really display a really firm grasp on their skill and dancing. There's a lot of skill level that's shown, as well as just a lot of fun. The pieces have just a lot of different variety, so you're bound to like something.”

Dancers in this year’s show collaborated with the Southeast Percussion Ensemble for the first time in years.

“The musicians are more sort of focused on themselves and keeping tempo, and the dancers are sort of listening to the music and reacting to that,” Peterson said.

“Our piece was a lot about the different walks of life and how we’re all stepping outside of college going to all these different places, with not losing what you’ve had [in college], with growing from what you’ve done and not losing the people that you had in your life as well [during that time],” Stephan said.

Dancers perform aerial acrobatics on silks during the Spring into Dance 2022 show.
Photo by Gina Williams

“Preparing for the show was a really amazing process, and the week before spring break, Coleman came in as a guest choreographer. He set the six-minute dance piece in five days of rehearsals. We rehearsed Monday to Friday, did 6 p.m. to 10 p.m. every night, and then on Saturday, we had a 8 a.m. to Noon [rehearsal]. So, we learned [“Flood Lines”] in a week,” Stephan said.

Mass communications sophomore Cooper Hill was an audience member at the concert who came to watch his friends perform. He said he has always enjoyed watching people dance.

“Even just SEMO being able to have dance programs, musical theater programs in general, is really good for the community,” Hill said.

Hill thought the aerialist piece “Integrated Disconnection” was fascinating and risky. An aerialist dance piece involves aerial silks on which one or more artists perform acrobatics while hanging from silk scarves.

“The fact that people can actually do that without having an anxiety attack is beyond me. What they did in there tonight was crazy,” Hill said.

“Spring into Dance” performed at the Donald C. Bedell Performance Hall at 7:30 p.m. April 8 through 9 and at 2 p.m April 10. To learn more about SEMO’s dance program, visit their website.