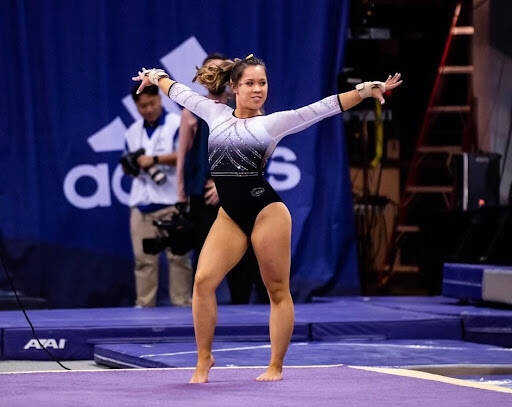 On April 10, senior gymnast Anna Kaziska performed in the final competition of her career, winning gold medals in the balance beam and floor exercise at the 2022 USA Gymnastics Collegiate National Championships. She scored 9.95 on both performances, tying her career best in each.

Before Kaziska ever had a chance to step on a competition floor as a Redhawk, she had to decide if a Southeast Missouri State coaching change would cause her to transfer. Head coach Ashley Lawson said Kaziska staying with the program showed her trust in the process at SEMO.

Kaziska said she is very pleased to have stayed with SEMO.

“It was a very big decision, talking with my family about whether I should stay here or go somewhere else. We made the ultimate decision to stay, and I am so glad I did,” Kaziska said.

Even as a freshman in 2019, it was clear Kaziska had a special talent in gymnastics. She led the Redhawks with 33 total scores of 9.700 or higher and amassed 11 total individual event titles. She broke personal records multiple times throughout the year and was named the 2019 Midwest Independence Conference (MIC) Newcomer of the Year. She also won MIC Newcomer of the Week six times during the season, including winning it in back-to-back weeks three times.

Even though she had plenty of accolades going into her last performance, Kaziska said she never tried to think about the things that happened in the past and tried to focus on what was going on in the moments of her performance.

“I’ve been doing these routines for quite some time now, and it was really just muscle memory at that point,” Kaziska said. “My coaches have always told me that I do what I do best, nothing more and nothing less. So that’s what I went out and tried to do.”

Through her four years of competition, Kaziska was a National Collegiate Athletic Association (NCAA) qualifier three times. The one year she was not was the 2020 season that was shortened by the COVID-19 pandemic.

Lawson believes Kaziska could have been a four-time NCAA qualifier because of the way she pushed herself and trained to be the best competitor on the floor.

“She’s a three-time NCAA qualifier and probably would have been four if Covid wouldn’t have happened,” Lawson said. “That’s something that a lot of people can’t say, and her career has been so remarkable in what she’s been able to achieve.”

Kaziska built a reputation during her career for being one of the toughest competitors on the team and at competitions. She said for her, it was about competing against herself and wanting to do the best she could for her teammates.

Coach Lawson said Kasiza’s hard work ethic in her career helped her reach the heights that neither one of them thought possible in the beginning.

“All the long hours that she has put in, she has definitely reaped the benefits of her work,” Lawson said. “She talked with me Sunday and said that she never could have imagined having a career like she had, here at SEMO or somewhere else. Her hard work and dedication made her who she is as a competitor.”

Kaziska went into her final competition on April 10 with the goal in mind of taking the gold for herself. Lawson said by tying with the floor champion from last year, she was able to go to nationals this year knowing she had a chance to win it.

Kaziska said she is proud of winning the golds at her final competition, but her main focus was performing her best and leaving her heart on the competition floor.

“I wanted to take in and soak up every last minute of competing that I had left,” Kaziska said. “It was a mentality of wanting to go out here and leave everything I had on the floor. I wasn’t worried about the scores; I just wanted to go out there and have fun and give it everything I had.”

“I got so many opportunities here that I never thought I would get, and I am so grateful for my teammates, my coaches and my family. They all played such a big role in my career here,” Kaziska said.

Lawson said Kaziska winning the golds in her final competition was the perfect end to a storied career; being floor champion was the icing on the cake and solidified everything she did in her career at SEMO.