SEMO and SIU symphonies collab on “Tchaikovsky and Rachmaninoff” performance 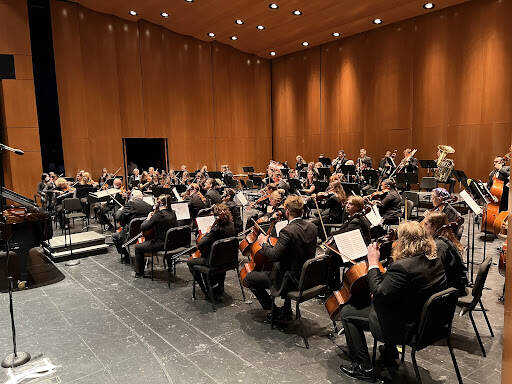 SEMO and SIU students in the symphony orchestras at their schools play together in a concert on Monday, April 25.
Photo by Lillian Glenn

The Southeast Missouri Symphony Orchestra collaborated with the Southern Illinois Symphony Orchestra to close out their 21st season with two symphonic masterpieces: Rachmaninoff’s “Piano Concerto No. 2” with guest pianist Brian Woods and Tchaikovsky’s “Symphony No. 5.” The symphony was conducted by Sara Edgerton, artistic director, conductor, and professor of cello and string bass at SEMO.

This concert took place at the Donald C. Bedell Performance Hall at the River Campus at 7:30 p.m. Monday, April 25, and again the following night at Southern Illinois University (SIU) in Carbondale, Ill.

The symphony featured a special guest pianist, St. Louis native Brain Woods, who has recently been appointed music director for classical programming at the World Chess Hall of Fame, one of the premier venues for chamber music in Missouri.

“There was a huge number of people on stage tonight. It was great to work and collaborate with so many students, and they seemed excited,” Woods said. “It was a joy to create such beautiful music with two great schools, and it could not have gone better.”

“[I] could feel the high intensity of the performance as we started playing. I love how SEMO and SIU collaborated,” Kandilaroff said. “It was a lot of fun and beneficial to get to see how others do things and get to perform under a different conductor at SIU.”

The two schools combined to create a large-size string section. The audience was at liberty to fall into the embrace of Rachmaninoff’s ravishing harmonies and rich sound, along with Tchaikovsky’s extraordinary ability to strike right at the core of human emotion, equally rich in content.

SEMO senior vocal and bassoon performance major Evan Short said he always gets nervous before a performance, but was excited once the orchestras started playing.

“During the performance, there was a lot of adrenaline and sweat, but it was a great performance, and I personally felt great about it. Collaborating with SIU was a great experience, because we got to see how other artists do things, and it gave us a big-size string section, which gives you a break, but also lets you get a solo opportunity, as well,” Short said.

“I felt good about the performance, and I think it is beneficial for us to collaborate with SIU, because it allows us to network with people who play the same instrument,” he said.

In his last performance of his senior year, Hrdlicka said, “I felt like I went out with a bang.”

The Southeast Missouri Symphony will perform Bethoveen in an upcoming symphony to be announced with date and time here. To order tickets, email tickets@semo.edu} or call (573) 651-2265.