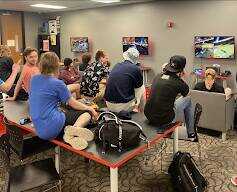 Team Kontent emerged victorious in the SEMOLYMPICS that came to an end April. 30. The Super Smash Bros team managed to come in second place, followed by the Valorant team in third and the Halo team in fourth.

Valorant team member, sophomore environmental science major Alberto Linares-Cervantes, expressed his thoughts on his first time competing in the SEMOLYMPICS and his team’s win in the Valorant round.

“I love the idea of the event, and it has been amazing to be a part of it so far,” Linares-Cervantes said. “My favorite part of the event has to be when one of our players got an ace against our opponents.”

The Smash Bros round of the event ended in dramatic fashion when the Kontent team pulled off an upset victory against the Smash Bro’s squad. A member of the Smash Bros’ team, senior accounting major Cody Bunger, expressed his disappointment following the loss.

“I’m disappointed that we lost overall; however, given the situation, I knew it would be an uphill battle,” Bunger said.

Team Content won The League of Legends’ round of the event after the Valorant team had to forfeit due to a missing player. The Super Smash Bros’ team bounced back from their loss to win the last event of the tournament, the Mario Kart round.

The display of high-stakes competitiveness shown throughout the SEMOLYMOICS is exactly what the event organizer, sophomore computer science major Jalik Smith, was hoping for when he originally came up with the idea to create the tournament. More than 50 people participated, and he was pleased with how the event played out.

“It’s been great — I’ve heard a lot of good feedback from casual members, and people made memorable moments, for sure,” Smith said.

As the winners of the tournament, Team Kontent will receive a trophy with their team’s name on it May.5.