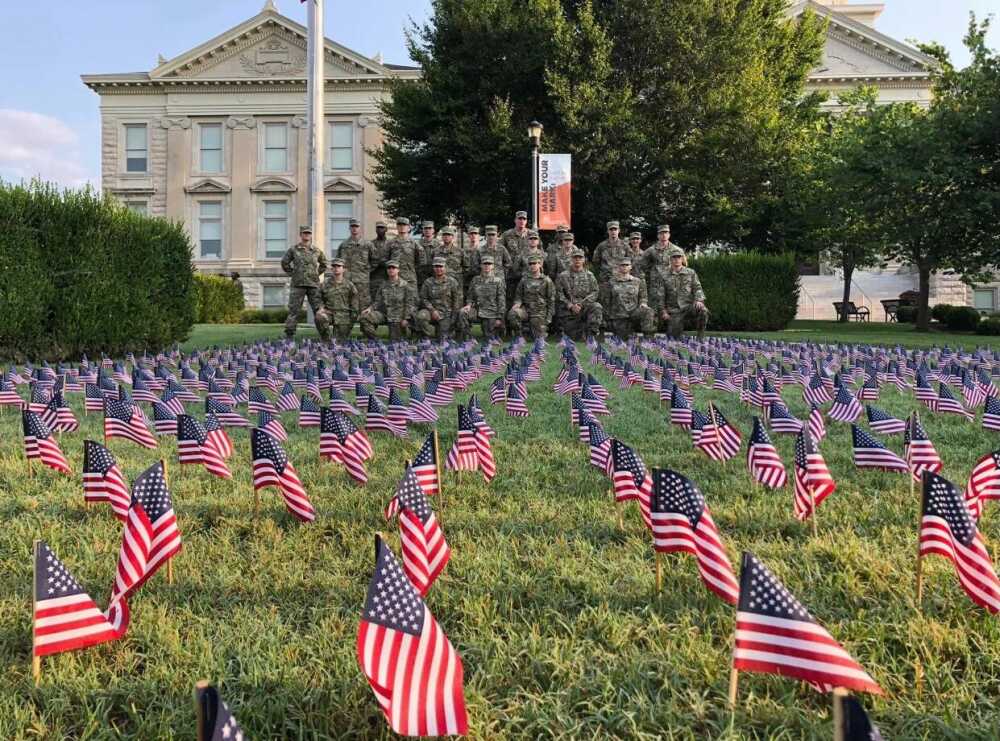 Show-Me Gold members pose for a photo at the Veterans Day Ceremony hosted by the Office of Military Veteran Services.
Photo submitted by CPT Crystal Cecil-Seiver

The Show-Me Gold program offers Army National Guard students an opportunity to pursue their degree as they prepare for Officer Candidate School (OCS). In the military, they learn valuable skills that prepare them for college and their professional careers.

Staff Sergeant Phoenix Horrell is the Noncommissioned Officer in Charge/recruiter for the Show-Me Gold Program. She said the “Gold” in the name stands for “Guard Officer Leadership Development.” The soldiers in the program have already enlisted and have been to Basic Training and Advanced Individual Training (AIT). Instead of going to their unit for drills, they attend drills on campus.

There are currently 25 candidates active in the Show-Me Gold program. While the soldiers are in the program, they cannot be deployed. Their tuition is 100% paid for, and they receive a $3,000 scholarship, GI Bill benefits and monthly drill pay. They live in the dorms for free. This allows students to focus on schoolwork without having to worry about tuition costs.

The soldiers drill one weekend a month. Their drill day begins at 7 a.m. and ends at 5 p.m. During that time, they prepare for OCS by practicing weapon training, land navigation and mission briefs. Twice a year, they have three-day drills, during which they participate in field training exercises. Once a year, they have a two-week annual tour that starts right after the spring semester ends.

“A really cool benefit with the Gold program as far as being in the military and going to college at the same time is, we are always on campus here with them,” Horrell said. “They come into our office every day to help them with whatever, whether it has to do with finance or counseling services or military stuff; we are here to help.”

Specialist Shamima Sadiqullah’s Military Occupational Speciality (MOS) is supply specialist, and she is a junior biomedical science major. She enlisted in the Army National Guard while she was still in high school. After OCS, she is considering changing her MOS to military intelligence to utilize the multiple languages she speaks including Farsi, Russian, English, Kazakh and Pashto or become a medical officer. Eventually, she wants her MOS and civilian job to align and hopes to become a cardiothoracic surgeon in the future. She said she enjoys the community the Show-Me Gold program provides.

“Being a military student seems so intimidating for a lot of people, but I think it’s completely worth it,” Sadiqullah said. “Especially because the military teaches you a lot of new things that can be really helpful while you’re in college. I feel like there are a lot of benefits to being in the military and going to college.”

Specialist Jace Pulley’s MOS is infantry, and he is a sophomore criminal justice major participating in the Show-Me Gold program. He decided to go to college after visiting his brother at SEMO. After spring break this semester, he became an inside linebacker for SEMO’s football team. He said he hopes to work for the Department of Homeland Security after he graduates, and the program makes it easy for him to fulfill his college responsibilities because his teachers accommodate extending assignment due dates if he has military obligations.

“Probably [the hardest part of being a military student in college is] just missing out on events,” Pulley said. “I’m also involved in Greek Life. It was Greek Week, and we had a big party at the end, and I couldn’t go, because we were having drills. I guess that part sucks because of the fear of missing out, but at the same time, it’s not a big deal, because that’s what I signed up for.”

Sophomore criminal justice major Specialist Mia Hill’s MOS is transportation, and she is also participating in the Show-Me Gold program. She joined the Army National Guard when she was a junior in high school. After college, she hopes to work for the Federal Bureau of Investigation, but is open to other opportunities after OCS. She said the military has helped in her college career in many ways.

“I think it’s definitely helped me with delegation, being able to take something from command and tell my chain of command about it,” Hill said. “It’s helped my organization skills and has played a very important role in my leadership skills. It’s allowed me to really put myself out there. The Show-Me Gold program has opened many opportunities to be a leader in the program and show others how to do that, too.”

Amanda Woods has been the military and veteran services officer at SEMO for eight years. Woods said there are approximately 350 military students who attend SEMO, including branches from the Army, Marine Corps, Navy and Air Force. The Show-Me Gold Program and Army units in the area contribute to the Army being the dominant branch on campus.

“I think one of the things that people need to realize about military students is their resiliency,” Woods said. “Our population has been through experiences, training and education that other students, especially our traditional students, might not have experienced yet, and I think that provides a breadth of knowledge and wisdom that could be used in a classroom setting.”

To learn more about the Show-Me Gold program, visit their website.