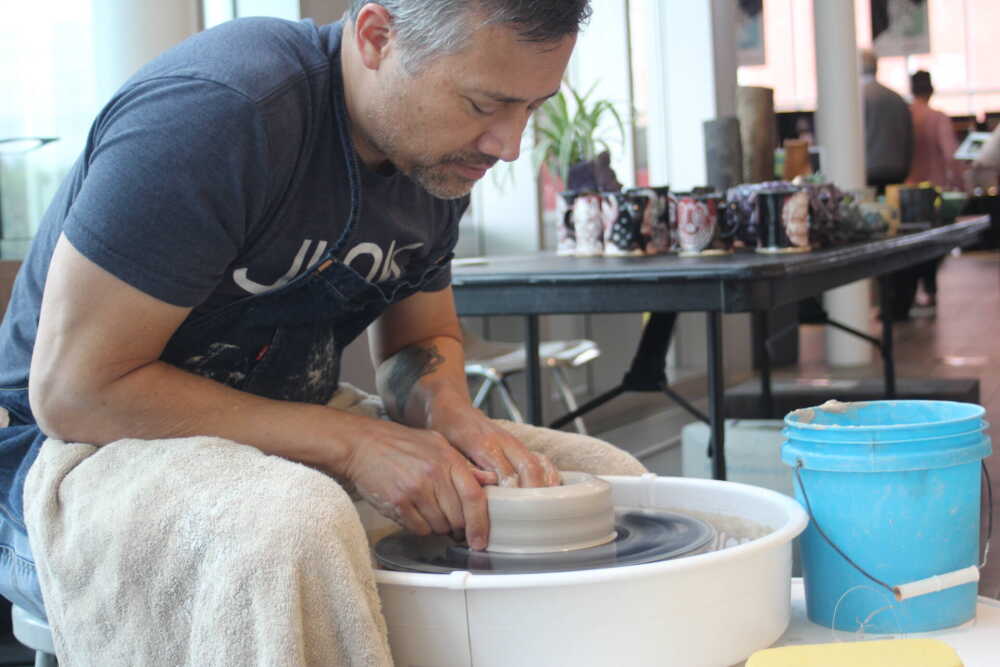 Professor of Art and Ceramics Benji Heu spins a ceramic vase. He said there is not always a financial incentive to pursue arts, but it can be rewarding anyway. “You gotta get a job. Nobody can do things just for fun!”
Photo by Matt Morey

The Holland College of Arts presented its Celebrate the Arts event with a variety of performances from across the arts such as opera, ballet, modern dance and country music on Thursday, May 5 as well as an auction lasting until Saturday, May 7 that will help to benefit the new arts annex on Frederick Street.

The new building will expand the River Campus to connect the new ceramics, painting, gallery and drawing facilities with a sculpture building between them. According to professor of art and design Emily Denlinger, who helped organize the event, this is part of the university’s plans to move all visual and performing arts to the River Campus. Currently, photo, sculpture, and art and design courses are on the main campus.

She is fundraising and requesting some help from the Missouri governor to help with building the new arts annex.

Professor of art and design Benjamin Heu, who teaches ceramics, said he thinks people like making clay pots because it’s different from other classes they must take and is rewarding to have a physical object for your efforts.

Even though there’s not a sculpture Bachelor’s of Fine Arts (BFA) degree, most students in the arts department take one or two sculpture classes, so it is convenient to have the building on campus. Many sculptures around town are made by students, like the ones from Melanie Reichert.

Meanwhile, the auction featured art from professors, students and professional artists from outside the university.

Many of the art pieces were made from Yamaha guitars. SEMO is a “Yamaha Institute of Excellence,” according to Denlinger. The school becomes a Yamaha Institute based on student achievement, which comes with various amenities, she said. So, the pianos, like in the top floors of Brandt Hall, are made by Yamaha.

“When a guitar is deemed ‘unusable,’ Yamaha drills holes in them to make them more unusable,” Denlinger said. “They distribute them to different Yamaha Institutes, so people can turn them into art objects.”

One of the guitars is painted by freelance artist Craig Thomas and currently bids at $110. n 2021, Thomas painted the floodwall mural for Cape Girardeau. His guitar features wooden mannequins set in various poses around the guitar. Scott Kelly, another professional artist, donated a guitar to the auction, which started at a $900 bid. The guitar depicts a surreal picture in which a bike may be driving off a waterfall or side of a building.

Denlinger said Kelly's artwork was priced so high because it was a “phenomenal quality and wonderful piece of surreal artwork.” She noted Thomas’ artwork matches the theme of the auction and fine arts building because it expresses all the arts: dancing, sculpture, music and painting.

Frames with QR codes stood intermittently throughout the auction for people to access the auction sales on their phone.

At the event, a special example of collaboration was also seen in the background of the performances, which started at 7:30 p.m. During each of the 16 sets, video footage of students in class overlaid with motion graphics played on a large screen in the background to complement them.

During the clarinet performance of Eugene Bozza’s "Fantaisie Italienne” played by Charles Hrdlicka, a red and orange abstract horizon seemingly shifted to the motions of his arpeggios at halting or flowing rhythms.

The footage was gathered by students in Denlinger’s video editing class, which was then sent to assistant professor at Dobbins Conservatory of Theatre and Dance Chris Haug, who used software to embed graphics with his Theater Lighting Design course.

Another standout performance was a country song by musical theater freshman Evie Rodenbaugh, who played acoustic guitar and sang to “Not Ready to Make Nice” by The Chicks.

Musical theater senior Aliegha Ramos, one of the masters of ceremony, stepped out of her role to sing “Fly Into the Future” from “Vanities” by David Kirshenbaum.

A photo gallery of the event is available on the Arrow website.