The Hard Reality of Competitive Cheer 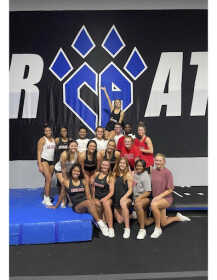 SEMO cheerleaders pose for this photo that was taken one day before they went off to nationals in Daytona, FL. The cheerleaders typically practice around four times a week for 2-3 hours until competition season, in which they may practice daily.
Photo submitted by Callie Metzger

Cheerleaders spend hours in the gym practicing and cheering on athletes. The stunts and work they put into their performance can also lead to serious injuries. However, cheerleading is often not considered an “actual” sport. Why is that? What is then deemed as a “real” sport?

Southeast junior and cheerleader Callie Metzger said without having the experience of being a cheerleader, it can be difficult to understand the danger and level of physical fitness the activity entails.

“I consider [cheerleading] very dangerous,” Metzger said. “I feel like it's one of the only sports that if you're not fully in it mentally, you can get really injured. I, myself, have had three or four concussions, and just this year, I sprained both my ankles. I think I tore something in my knee. … I’ve seen bones stick out of people from [cheer injuries].”

“Once a week, for 16 weeks, so about 16 injuries, which is generally more than some other sports when you look at activity levels and things like that,” Hudson said.

Hudson said among the different injuries, concussions are definitely the most serious injury he sees from cheerleaders. He said there have been multiple concussions that ended up being “career ending” for the athletes.

“[Cheerleaders] put in the same hours, the same amount of work as a lot of what we would say ‘high-risk’ sports — football, soccer, basketball, … anything that has a high risk of injury. I would say cheer is up there with [those sports],” Hudson said.

Former Southeast assistant cheer coach and SEMO cheerleader Jennifer Boyd said cheerleading should be given “1,000% more recognition” because of the grueling effort and time commitments involved.

“People see the cheerleaders as someone who’s waving their poms and throwing up stunts,” Boyd said. “But what they don’t see is the amount of blood, sweat and tears they put inside of practice, like other sports [do]. We still have to go and lift. We still have to get study hours in. We still have to maintain a certain GPA level.”

Callie Metzger said prior to coming to SEMO, her high school was very good at recognizing the cheerleading team. Metzger said it was tough transitioning to a university that does not classify cheerleaders as athletes.

“We cheer at every single football [and] basketball game,” Metzger said. “Then, we have our own competition at the end of the season, so we’re putting in just as much work, and it's just as hard on our bodies [as other sports],” Metzger said.

Metzger said if there is anything she would like people to uphold as the image of cheerleading, it would be that what they do is just as hard and takes just as much dedication and work, if not more, as every other sport.

“I’ve played a lot of sports, and this is definitely the most demanding mentally and physically,” Metzger said. “I wish people would understand what all goes into it, how hard it is, how much work we put in and how this is just as important to us as any sport is to any athlete.”