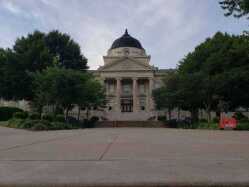 On May 20, the Board of Governors met to approve a contract with ABM Industries Incorporated, taking the place of the current custodial staff provided from the university and a 4% increase per credit hour on tuition.

Vice President of Finance and Administration Brad Sheriff said the move had been talked about for a while among university officials and staff.

“We've been very transparent about this from the beginning with our custodial services staff, so they have known every step of the way what's happening,” Sheriff said.

The move to ABM alleviates recent staffing shortages in the department. Sheriff said it’s been very difficult to retain or hire custodial services; with approximately 65 custodial services positions all together, they “haven’t had a staffing level above about two thirds of that for probably six months.”

Sheriff said the contract will help solve this problem, while still allowing current university custodial workers to be offered jobs with ABM.

“What will happen with this is that those of our custodians who still work for us will, if they choose to, go to work for ABM,” Sheriff said.

In open session, the board approved a tuition increase by $10 per credit hour for the 2023 fiscal year by a vote of 5-1. Governor Vivek Malik provided the one “no” vote.

Malik said he thought the rise in tuition may not be a good idea with the rise of inflation also being a factor for everyone in the economy at this time.

“I personally do not think at this point when inflation is so high that we need to be doing the same thing that everybody else is doing,” Malik said. “I would be opposing to increase any tuition. Rather, we should be the one in the state saying that we and everybody else is raising the prices. We are the ones who kept the same on, because we understand the pain and suffering of people who are going through inflation.”

Vice President of Enrollment Management and Student Success Debbie Below said the raise in tuition is in line with other schools in the area.

“Missouri State did announce last month that they're also increasing $10 per credit hour at the undergraduate level. So, our tuition rate and their’s historically [has] been similar, and it looks like it will continue,” Below said.

Other board members decided to go ahead with the increase because of the fear the university will need to play catchup in future years if the increase did not go into effect. President of the Board of Governors Edward Gargas pointed out if they just go by inflation in this scenario it could leave them behind other schools in terms of tuition.

“When the national inflation rate is above eight, we're asking for 4%, it's a little easier pill to swallow,” Gargas said. “But also with the risk of if we … had to play catch up late and our competitors are still maintaining a flat 4% increase, and we suddenly got to ask for an eight or 10% increase [to] play catch up because inflation doesn't cure itself or come back in line and now we find ourselves in a predicament.”

To find more information on the Board of Governors meetings as well as the times for the next meeting, visit their website.