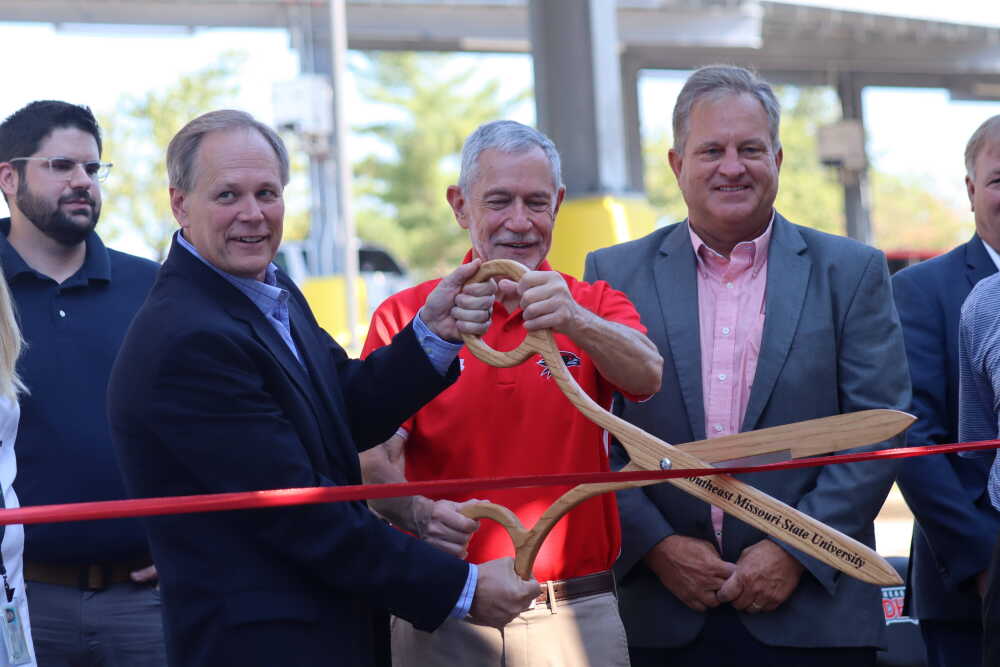 Officials from the Cape Girardeau community gathered for a ribbon-cutting ceremony near the Show-Me-Center to celebrate the finished construction of the parking lot’s Ameren solar panels.

“Electric grids [are] connected together down here in Cape, so when we generate the electricity, it goes out into that pool and so it's supplying all parts really of Cape,” Birk said.

He said all of Cape Girardeau will be getting “a piece of this energy.” Birk noted this was the sixth solar project they’ve worked on within Ameren Missouri’s service area.

“This is by far the biggest one [project] that we've done,” Birk said.

Along with fueling energy to the community it also adds shade to the Show-Me-Center parking lot.

The solar panel construction also provided experiential learning for some students. SEMO University president Carlos Vargas said that, during their development, certain students were able to observe the process of connecting the solar panels to the power grid.

Vargas said the university is “evaluating” the possibility of putting in car charging stations in the future.

“Ameren is interested in us doing it, so they’re actually evaluating locations, so this could be one of them, the campus,” Vargas said.

While evaluating the possibility of charging stations, Vargas said he wants to use this as a learning opportunity for students.

“Certainly what we want to do is to continue to promote the knowledge that the students have about these technologies— we already have academic programs that incorporate discussions and analysis of solar energy, eolic energy and so on,” Vargas said.

Cape Girardeau Mayor Stacy Kinder gave her remarks at the start of the event. Kinder said she, along with the Cape Girardeau community, are thankful for the partnership between SEMO and Ameren Missouri.

She said she appreciates Ameren’s forward-looking attitude with their work.

“We're also grateful to know that Ameren is applying such a forward-thinking approach as we see here in the modernization and development of our community’s power grid and electricity capabilities,” Kinder said. “I'm sure our college students are perhaps the most appreciative as they will be plugging in more and more devices and even their cars in the future.”