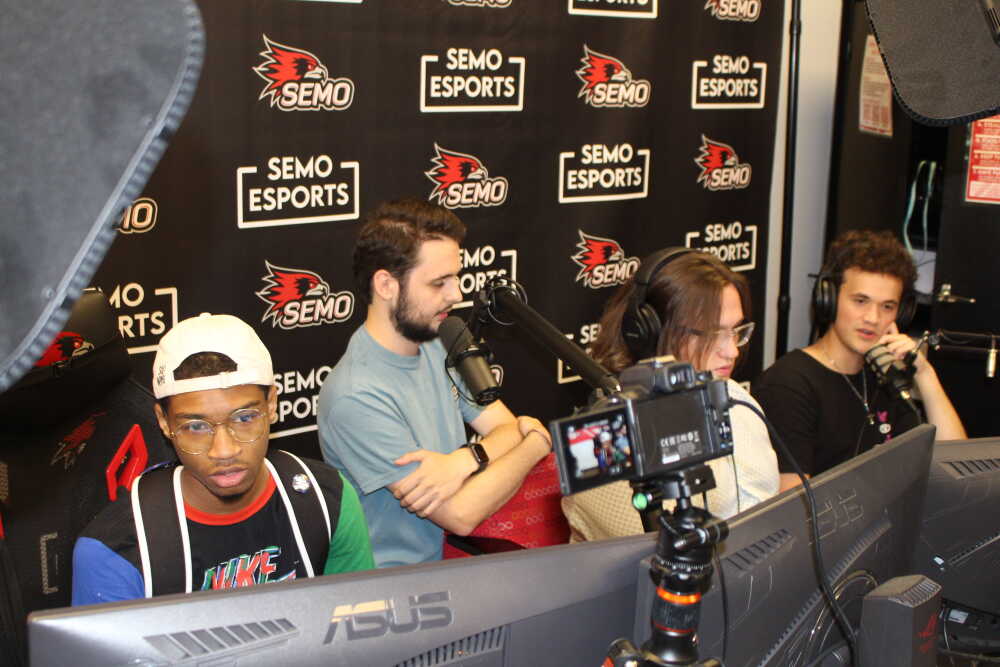 (Left) Jalik Smith, Zach Healy, Jack Stout and TJ Rysanek hosting the 24 hour charity stream. The stream had been going on for 6 hours at the time.
Photo by Jeffery Long

The Southeast Missouri State eSports club raised over $800 during their 24 hour charity stream that began on Aug. 26 to Aug. 27, 2022. The purpose of the stream was to raise money for The Trevor Project; a nonprofit organization that focuses on preventing suicide of LGBTQ youth.

The stream included a rotation of hosts and games, ranging from casual to competitive. There was also a live chat on the side that allowed viewers to interact with the hosts or donate to the foundation.

This was followed by a best-of-three series of Valorant starting at 9 PM. By 10 PM plenty of donations had flooded in giving them a good start towards their $500 goal.

Esports president Zach Healy was excited about the idea of a 24 hour stream.

“We wanted to do something special to start off our year,” Healy said. “We want to do something to bring in a lot of excitement for everyone who is participating in the year.”

This was not the first 24 hour stream that the club had done, but it was the first to help raise money for a charity. The previous 24 hour stream focused on the celebration of a new Pokemon game.

“We haven’t done one since and doing it for charity seems like a good thing to do, to support a great cause,” Healy said.

As the stream entered the early morning hours, it would maintain a double-digit viewership. During this time, the game switched to Skyrim with some extra mods added on, and then was followed by casual games like UNO! and Yahtzee.

One viewer, Jasonhfx81, said he enjoyed the community-filled environment of the stream.

“The stream was lively and entertaining,” Jason said. “It helped me get through a 12 hour work day while supporting a great cause. Would I do it again? Absolutely.”

Heading into the final hours of the stream, the club had surpassed their goal and had reached over $800 in donations. Even with surpassing their goal, the eSports club decided to smash eggs on a member of the club to help drive in more donations. Finally at 6 PM on Aug. 27th, the stream came to a close.

President of Content Jack Stout says the idea to make it a 24 hour stream was a great idea for the viewers as well as new members.

“We wanted to be able to maximize the amount of interaction from freshman and new members of the club.” Jack said. “Doing it through fun stunts that can only be done though a 24 hour stream is a great way to do that.”