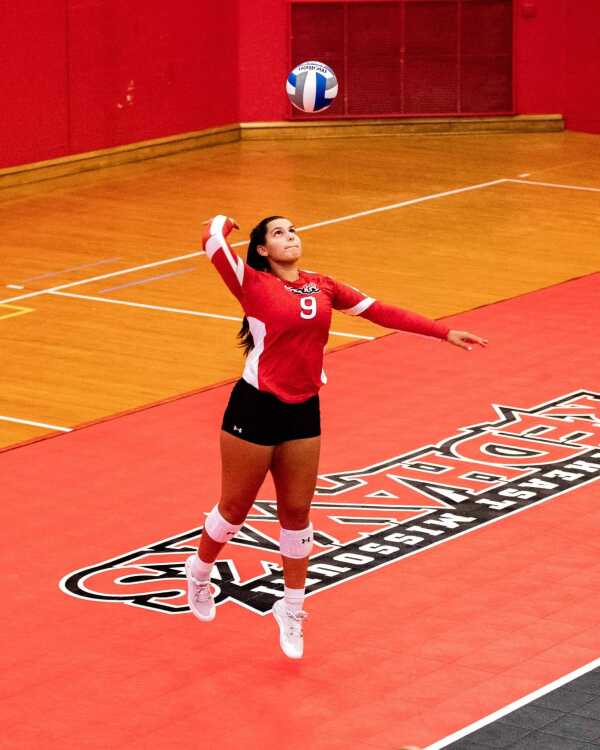 Just three matches into the 2022 season junior setter Izzy Lukens is already having a career year in a new starting role for the Redhawks.

Head Coach Julie Yankus has noticed the difference from Lukens right now and Lukens during her first two years.

“She’s done a great job of making those improvements and learning over the last two years and then taking over a starting role this year,” Yankus said

In the SEMO Invitational Lukens totaled 20, 27 and 29 assists against Arkansas Pine-Bluff, North Dakota State and Jackson State. The 76 assists through three matches dwarf her previous career high of six assists.

Lukens has had a talent for setting others up, as she holds the Nebraska state high school record with over 4,375 career assists, including 1,181 her sophomore year. She also holds the state freshman record for assists in a match with 62.

Senior outside hitter Zoey Beasley said she believes Lukens has certain talents that separate her as a setter.

“Her ability to see and feel where the blockers are on the other side of the net gives her the opportunity to set the ball to the open attacker on our side,” Beasley said.

Beasley also complemented Lukens ability to put the right people in a good position at the right time.

Prior to this season, Lukens had not seen much time on the court. Head Coach Julie Yankus said it was just a matter of Lukens getting comfortable.

“We really just kind of had to get her used to the system and see how we wanted to run things at this level,” Yankus said.

Lukens backed her coach's statements, stating her confidence and comfortability on the court are the biggest ways she’s grown since her freshman year.

“Freshman year I was afraid to talk and lead on the court when I was setting, and now that I’m a junior I feel like I have a bigger say than what I did freshman year,” Lukens said.

Lukens is far from her freshman year, now, as she is one of the known leaders for the Redhawks. Coach Yankus said this is something vital for setters to be at their most effective.

“As a setter you’re someone that touches the ball every play and so you kind of naturally have to be a leader because you make such an impact on how the team performs,” Yankus said.

Beasley said she believes one of the main ways that Lukens leads is with her work ethic.

“She works really hard to make sure she’s always in the right position and she’s always looking for feedback. I think that’s her way of showing she always wants to get better and work hard for her teammates,” Beasley said.

Lukens hopes to help guide SEMO to a successful season. Through three matches this season the Redhawks are 2-1 heading into the Illinois State Redbird Classic this weekend. SEMO faces Green Bay and Oral Roberts on Friday, and then competes against Illinois State on Saturday.