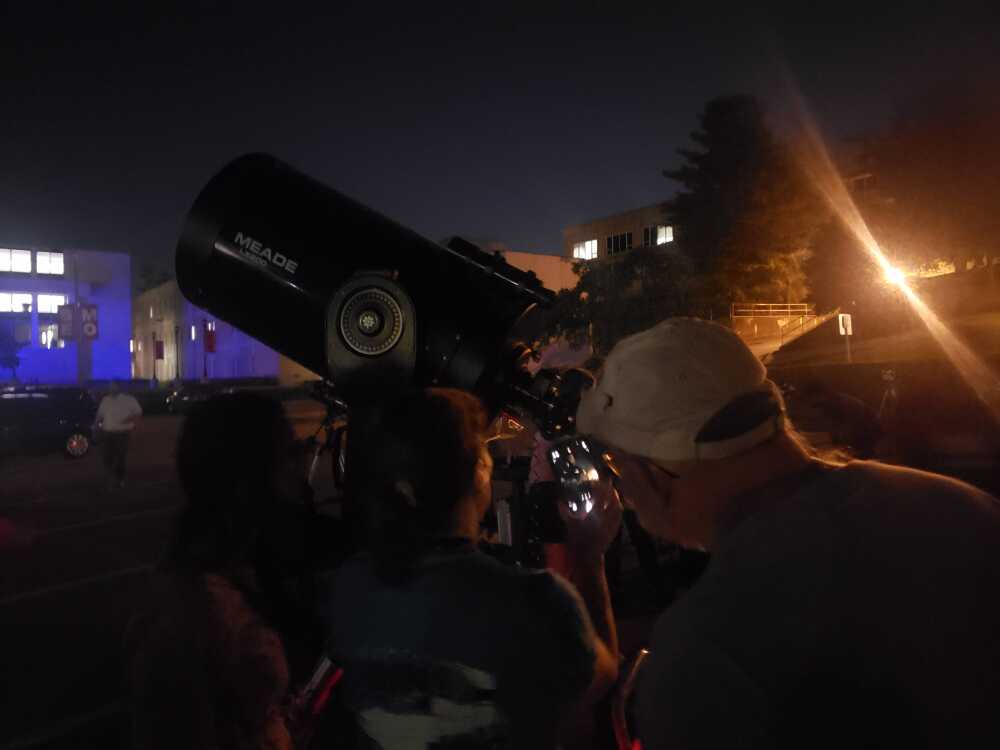 This 14-inch reflector telescope took an hour to calibrate. In it, students could see Saturn and its ring, typically invisible to the naked eye.
Photo by Matt Morey

On the quad between Johnson, Magill, and Rhodes Halls on Thursday, Sept. 1, from 7 to 9 p.m., Saturn could be seen. So could the constellation Cygnus and Vega — the brightest star in the Lyra star system.

These celestial bodies were visible with the aid of SEMO’s Astronomy Club, who supplied six telescopes and five astronomy binoculars to a crowd of curious students.

SEMO President Carlos Vargas introduced the event. “I do advise you to avoid using your flashlights,” he said. “We have the lights dimmed here in the parking lot so they don't shine in the telescopes.”

This night in particular, according to the club’s event page, was going to demonstrate the Department of Chemistry and Physics’ new piece of equipment — a 16-inch reflector telescope — which Astronomy Club President and Environmental Science sophomore Brianna Mills said cost more than $20,000.

But due to the weather, Mills said the club decided to keep the telescope housed in Rhodes Hall.

“With the cloudiness — and it’s very expensive — and hard to get down, so we were like, ‘Let’s not do it tonight,’” Mills said.

There will be more opportunities, though: it was only the club’s first “telescope event” of the year. These events will be held every third Thursday to see a variety of moon phases, according to Chemistry and Physics Instructor Pamela Mills, a sponsor for the Astronomy Club.

“Our goal is to grow enough interest in astronomy to have a minor or a major, or maybe an observatory on campus,” Pamela Mills said. “We want people to be aware we have telescopes on campus and to take astronomy.”

Pamela Mills said next semester, astronomy labs will be available separately from the lecture courses, which typically require a combined four hours. The telescope event is like a preview of what happens in lab courses.

“If you’re more of a visual learner, labs are very beneficial,” Brianna Mills said. “You’re actually doing things, instead of sitting and hearing about them. I like labs, because it applies [the] science, and I feel like it sticks better.”

Even though the 16-inch telescope may have to wait a few more moon phases, students lined up anyway, some waiting 30 minutes to use the 14-inch scope to see Saturn and its rings.

Some of those students plan on joining the astronomy club. The club is still new, having re-formed during last November’s NASA-affiliated space week, Brianna said. Now, there are about 50 members, and they are working on events for another space week later this year.

Many students attended out of curiosity or on a whim.

After the 14-inch telescope was aligned, the crowd started clapping, and people cheered about Saturn.

The first meeting for the Astronomy Club of SEMO will be on Sept. 14 in Rhodes Hall, room 121. They will host free telescope events every third Thursday. Students can join for $10, which also gains them admission to the Astronomical Association of Southeast Missouri.