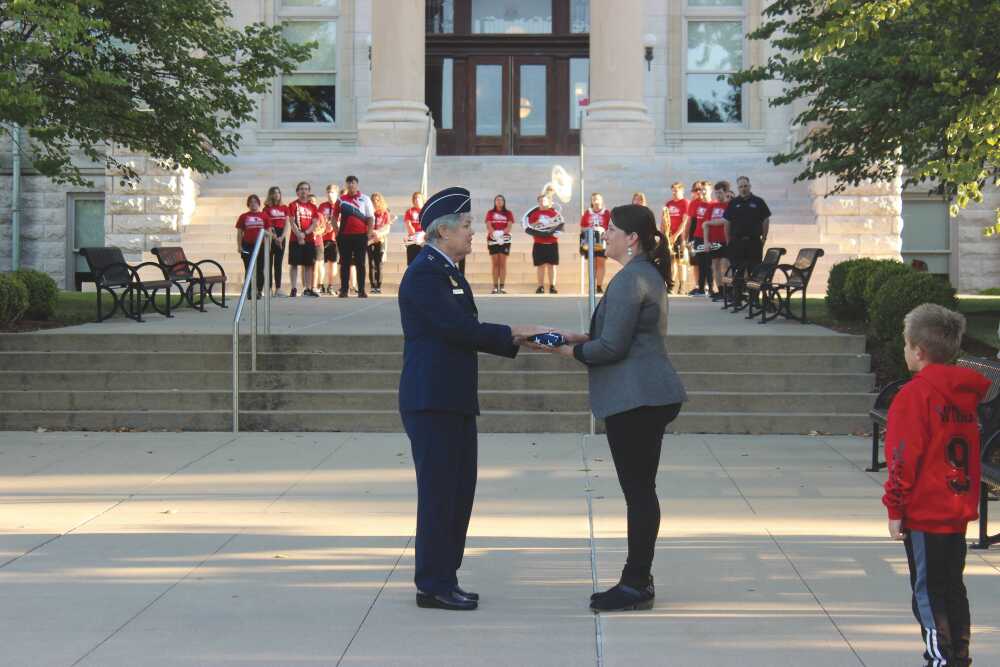 Retired National Guard-Major General Cassie. A Strom recieved an american flag from the SEMO Liason to Student Veterans and Military Amanda Woods. The flags that were handed out were flown over cities that were attacked in America on Sept. 11, 2001. Woods’ son stands nearby to watch his mother recieve the honorary flag.
Photo by Kyrie Padberg

SEMO’s Office of Military and Veterans Services held a Patriot Day event at Academic Hall on Monday, Sept. 12 at 7:40 a.m.

Twenty one years ago, two planes crashed into the New York World Trade Center, one into the Pentagon, and the last in Shanksville, Pennsylvania. The University annually holds this event in front of Academic Hall to honor the 2,977 people who lost their lives that day.

Nearly 3,000 mini American flags were placed in front of Academic Hall to represent the first responders, military members and civilians whose lives were lost in the tragedy.

“What I vividly remember most about Sept. 11—there is the unity that our country experienced, that our world experienced,” Woods said. “People from different backgrounds, beliefs and walks of life stood shoulder to shoulder rescuing, caring for and supporting one another.”

National Guard retired Major General Cassie A. Strom presented Woods with an American flag that was flown over the attacked cities.

“I want to commend you for having this ceremony because as we get further and further away from the day that the event happened, it becomes easier and easier to forget,” Strom said.