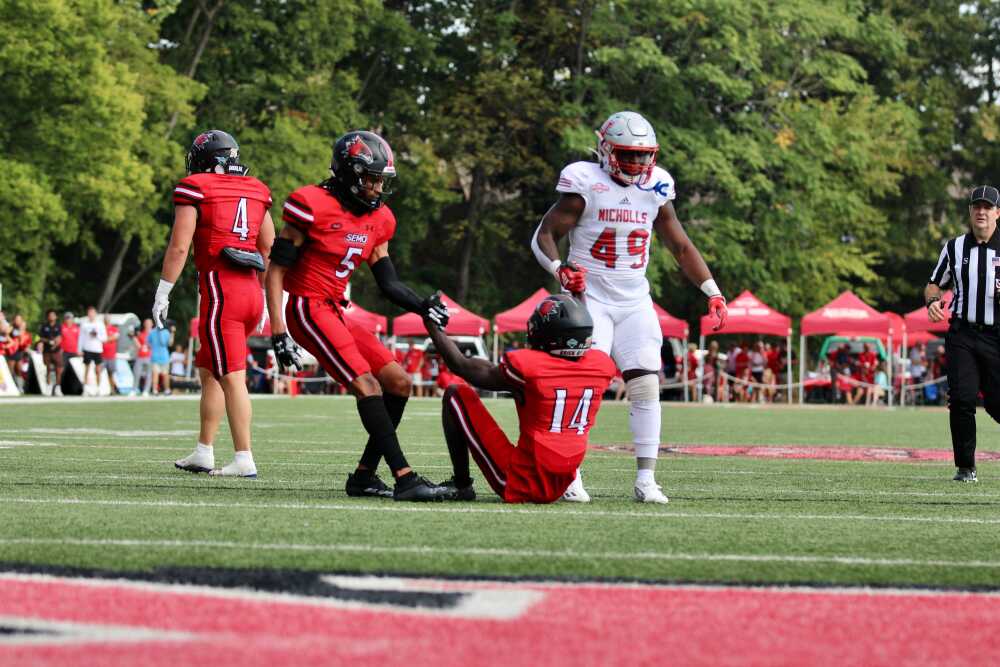 The Southeast Redhawks came out on top with a 42-16 win in a matchup against Nicholls State University in their first home game of the season.

Saturday’s game was Southeast’s very first matchup with the Colonels since the Ohio Valley Conference and the Southland Conference joined together with a scheduling alliance.

“We focused on the standard to play at home,” head coach Tom Matukewicz said. “There was a time where we didn’t lose at home. We’re trying to get that back, so that was our main focus.”

Sophomore quarterback Paxton DeLaurent threw for 309 yards and three touchdowns while completing 22-of-32 pass attempts. Senior running back Geno Hess led the way in rushing yards with 70 total and averaged five yards per carry. He also added a rushing touchdown and two receiving touchdowns for the Redhawks.

Senior receiver Johnny King led all receivers with 82 yards on five receptions while Pervis Frazier, another senior receiver, followed closely behind with 64 yards on three receptions. Junior receiver Ryan Flournoy also chipped in 52 yards along with one touchdown.

“We executed in the run game and the pass game, so it was overall just a great game by everybody,” Paxton DeLaurent said.

Senior receiver Garrett Todd returned Christian Fuhrman’s blocked punt at the end of the third quarter for 29 yards and the touchdown.

The Colonels’ 16 total points came only in the second and third quarter.

“We’ve struggled a lot on third down,” Christian Fuhrman said. “But I feel like today we did a really good job stopping on third down and just focusing on the little things.”

The sole interception by the Redhawks came from junior cornerback Tyler Nelome early in the first quarter.

“It was a full team win,” DeLaurent said. “The defense played really good to start off the game, special teams got a punt block, [there were] a couple huge returns.”

The Redhawks will be back in action in Houck Stadium next Saturday, Sept. 24 when they take on the Bears from Central Arkansas University. Kickoff is set for 2 p.m.