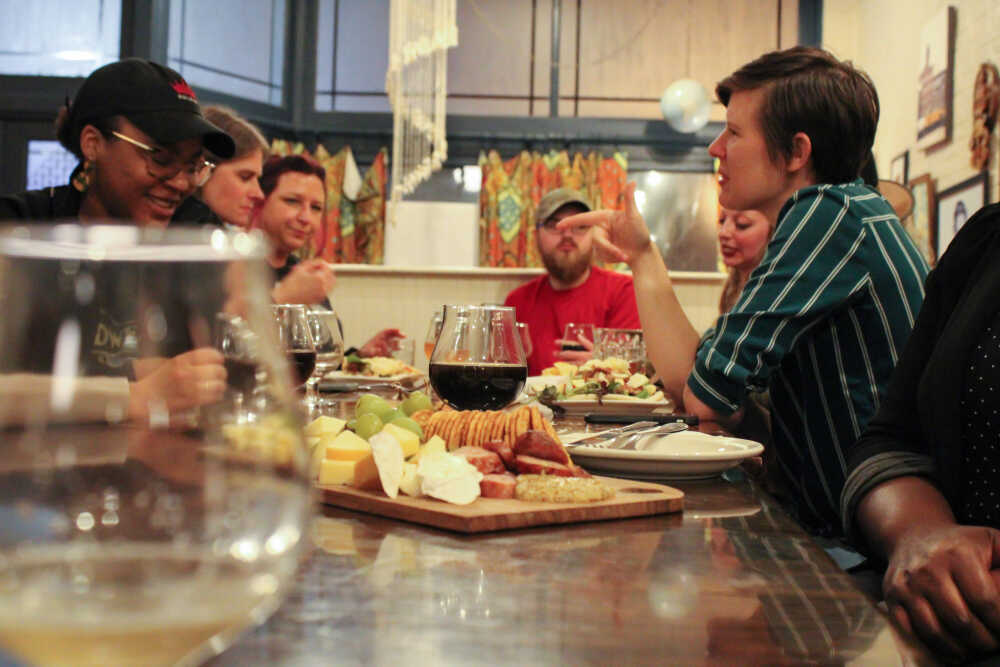 Head brewer at Earthbound Beer in St. Louis Danielle Snowden bonds with guests over beer and a snack at Ebb and Flow Fermentations after the "Women in Beer" event. One of Snowden's most recent beer experiments was a mock Mountain Dew Baja Blast in which she used blue raspberry kool-aid to create a vibrant blue color.
Photo by Molly Phegley

Four women came to SEMO’s Glenn Auditorium on Sept. 22 for the “Women in Beer” keynote and panel event and spoke about their experience in the craft beer industry as women and how they worked their way up from homebrewing and internships.

Co-creator of the “Women in Beer” event Amanda Camp and management professor Erin Fluegge have been speaking for the past few years about planning an event for women in the beer industry to provide insight on how they learned to network, manage and build a business in an area they are passionate about.

“The content wasn’t just about being a woman and doing this. It was inspirational overall to anybody who listened,” Fluegge said. “You can pretty much do anything you want to do, and that’s the message I want for my students in any way, shape or form.”

The keynote speaker for the event was executive director of the American Homebrewers Association Julia Herz. She was joined by panelists director of brewing for Anheuser-Busch Natalie Johnson, head brewer at Earthbound Beer in St. Louis Danielle Snowden and owner and brew master of Scratch Brewery in Ava, Ill. Marika Josephson.

The women spoke about diversity, equity and representation in the beer industry from the female perspective.

“I’ve always kind of been a little outspoken and loud, and I do remember early in my career I was with some peers. I had my peers tell me, ‘If you don’t be a little bit more composed, you’re making us look bad,’” Johnson said while answering a panel question about adversity in the industry. “And that stuck with me for a while and actually changed the way I acted.”

Johnson said in response to this criticism, she stifled her performance to fit into a box someone else told her she needed to fit into. Since then, she has learned to value her expertise and take a seat at the table where she deserves it.

The women spoke about the importance of confidence in your work and gave inspiring business advice to young professionals who attended the event.

“It definitely gave me a lot of encouragement. I really liked that ‘take up space’ was said a couple times, especially in such a male dominated industry,” fifth year advertising major Liz Wilhelms said. “I thought it was extremely important for college students, specifically women, to hear those encouraging words.” 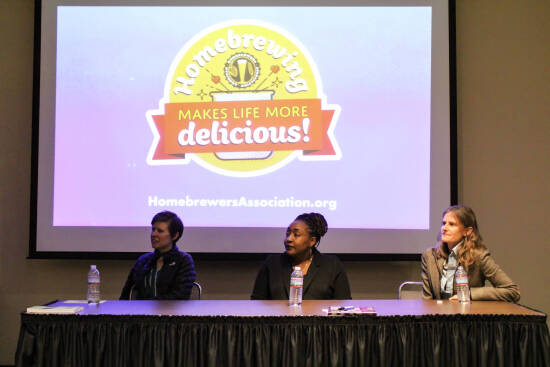 Panelists director of brewing for Anheuser-Busch Natalie Johnson, head brewer at Earthbound Beer in St. Louis Danielle Snowden and owner and brew master of Scratch Brewery in Ava, Ill. Marika Josephson listen to their panel questions before responding. All three women said they are grateful for their experiences and positions in the beer industry.
Photo by Molly Phegley