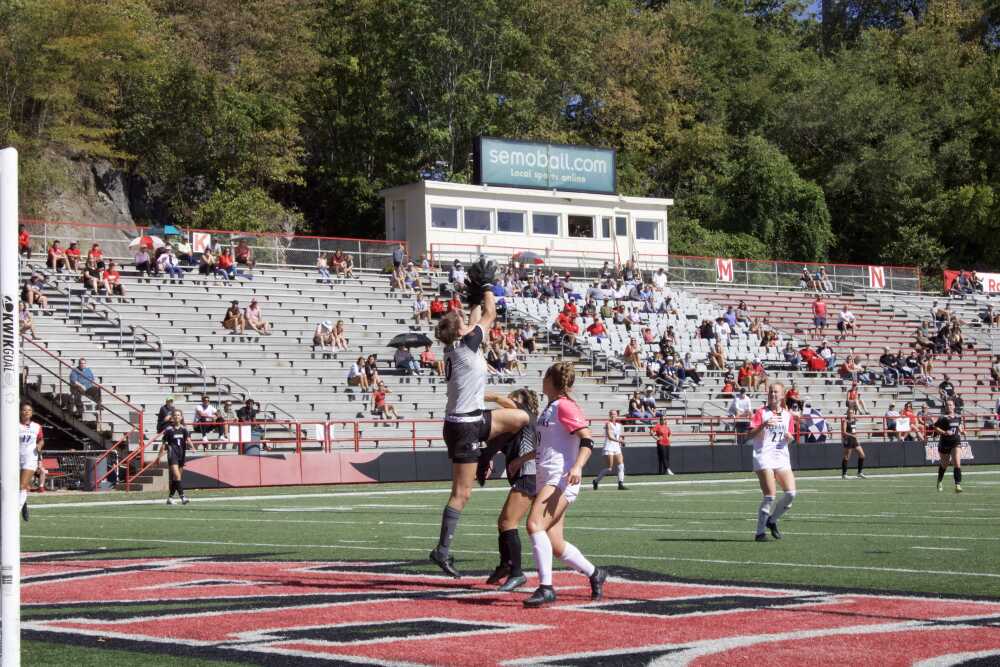 SEMO freshman goalkeeper Sophia Elfrink (0) jumps up to make a save during Sunday's game against Lindenwood.
Photo by Jeffery Long

SEMO women’s soccer settled with a draw against the Lindenwood Lions at Houck Field on Sunday, Oct. 2nd by a score of 0-0.

The first half started with both sides getting opportunities to jump ahead with multiple corner kicks to get the match started. The defense from both sides would keep the scoresheet clean heading into the second half.

The Redhawk's offense would immediately take action heading into the second half with the team taking 11 shots on goal, almost doubling the total shots from the first half. Despite multiple opportunities to take the lead, the team couldn’t capitalize and settled with a draw.

Redhawks redshirt junior Megan Heisserer would be the player of the match with three shots after coming off the bench late in the second half as a substitute. The team collectively took 17 shots in the match.

Lindenwood was aggressive with their corner kicks. They received four in the first half. Freshman goalkeeper Sophia Elfrink commented on how she was able to handle the strong and aggressive corners from Lindenwood early in the match.

“I was taught before that they had pretty strong corners,” Elfrink said. “I was like. ‘Alright, we’re ready for this, we practice this.’ So I think it was good for us to see aggressive corners.”

Despite the offensive surge late in the match, the team failed to capitalize on three notable opportunities. Heisserer described it as frustrating.

“I think we had 17 shots now, not being able to put one away is really frustrating,” Heisserer said. “The team’s done the work, it's just one last touch that we have to finish.”

Redhawk’s coach Heather Nelson says she was very pleased with how the team finished the game and the opportunities that the team produced.

“I was very pleased with how we finished the game. The energy we brought into the second half and the scoring chances that we created.” Nelson said. “The good thing is that we’re creating opportunities.”

The Redhawks will look to continue their momentum at 4 p.m. on Oct. 6th when they travel to the University of Arkansas at Little Rock to take on the Trojans.