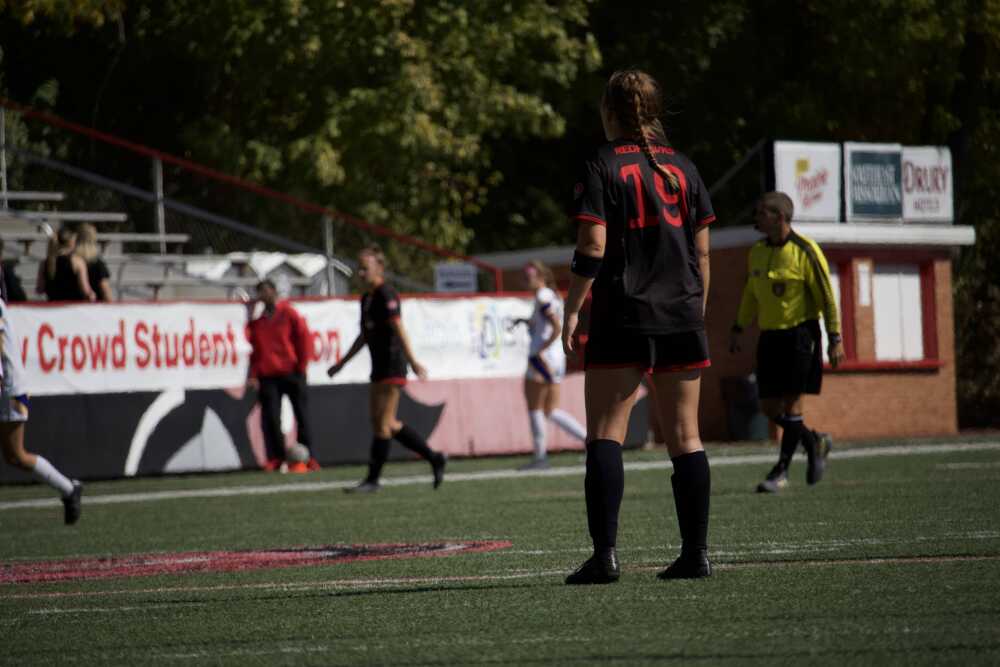 SEMO women’s soccer settled with a draw against the Morehead State Eagles at Houck Field Oct. 9 by a score of 1-1.

The first half started off with both teams getting equal possession of the ball and good scoring opportunities to jump ahead. Similar to the last home game, both defenses held their ground and kept the scoresheet clean heading to halftime. The Redhawks offense would take seven shots while the Eagles took only three.

The second half broke the tie with Eagles junior forward Nicole Fiantaco scoring 50 minutes in to make it a one-goal game. The Redhawks tied the game 23 minutes later when freshman forward Cayla Koerner took a shot that bounced off an Eagles defender and into the net to tie the game at one.

The rest of the second half was filled with physical playing and aggression, with the officials having to calm a player down from the Morehead side. Despite both sides taking shots and close saves from the keepers, the match ended in a draw.

The Redhawks would take a total of 14 shots in the match, 10 of them being on goal. There were plenty of chances all around for the team, and sophomore forward Katelyn Miller commented on the number of chances they had.

“I thought we had a lot of chances,” Miller said. “But I’m glad Cayla got one in, because with that many chances, one’s bound to go in.”

The match was filled with aggressive playing, with most of the physicality occurring in the second half. Redhawks junior midfielder Faith Liljegren commented on how the team held on.

“We definitely come out to play each game,” Liljegren said. “If another team wants to give it to us, we’ll get right back. We definitely hold our own.”

The Ohio Valley Conference playoffs are around the corner with the playoffs starting on Oct. 28. Redhawks coach Heather Nelson says the team is going to take it one game at a time.

“We have a very good opponent coming up on the road. We have a week to prepare for them and I think they’re extremely organized in attack and defense,” Nelson said.

The Redhawks will travel to Cookeville, Tenn., to take on the Tennessee Tech Golden Eagles Oct. 16.