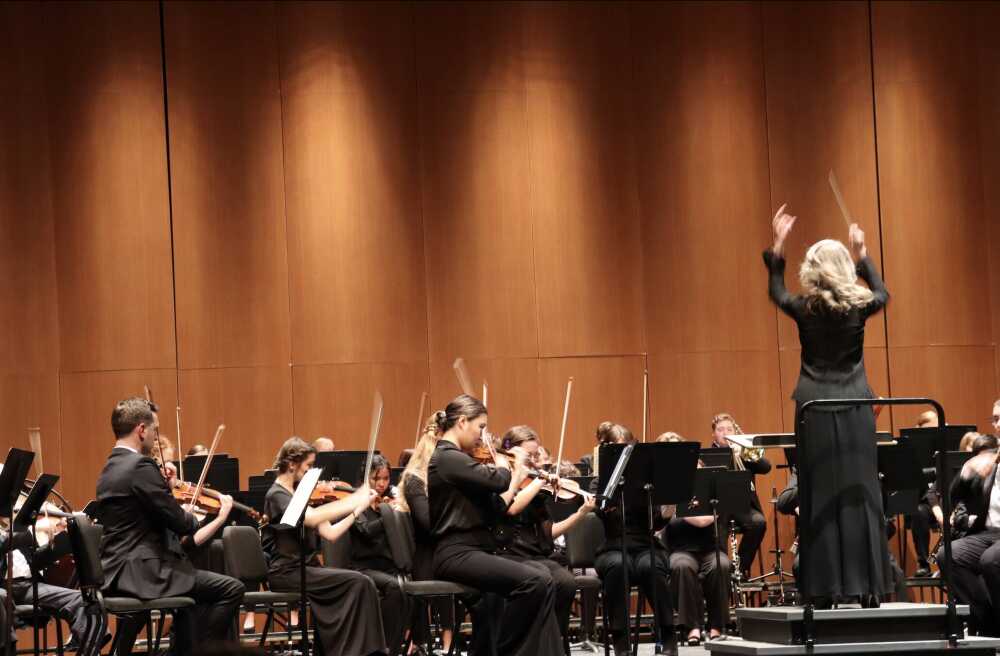 Cello and string bass professor Sara Edgerton, who directs the Southeast Missouri Symphony Orchestra, conducted the orchestra. Edgerton said one goal of the event was to make classical music accessible and relevant to all audiences.

“It’s not just music for a few people to come to, it’s really music that speaks to the human condition,” Edgerton said.

The concert opened with Rhapsodic Dance for Orchestra, Op. 75, which is based on Caribbean folk tunes. The piece was composed by Samuel Coleridge-Taylor, a highly renowned composer of African descent. Next on the program was George Walker’s “Lyric for Strings,” a piece dedicated to Walker’s grandmother who was formerly enslaved. Walker was the first African American composer to win the Pulitzer prize.

During the second half of the concert, the orchestra performed “Piano Concerto No. 1” by composer Pyotr Tchaikovsky with Russian classical pianist Valentina Igoshina. Edgerton said this is the first time in eight years Igoshina has performed at SEMO.

“She’s just been all over the place: in Poland, in Spain, you know, big competitions,” Edgerton said. “And she’s on the list of the great women pianists of the century, so it’s a very rare privilege to be able to have someone of this quality with us.”

Edgerton said Igoshina has local connections and sponsors in St. Louis, which gave her the opportunity to perform with the University.

Sophomore plant and soil science major Chloe Menckowski, who played violin in the concert, said she was nervous but excited to show off her hard work.

“Tchaikovsky in general is always challenging, but we are always up for the challenge, and in the end, it’s a very beautiful piece and it’s worth all the work that we put into it,” Menckowski said.

SEMO graduate student Leon Miller said he felt like the performance gave him time to take his mind off everything and appreciate the music.

“I really appreciate the work and the talent that some of the artists had on stage; listening to the flutes and the violins was amazing,” Miller said.