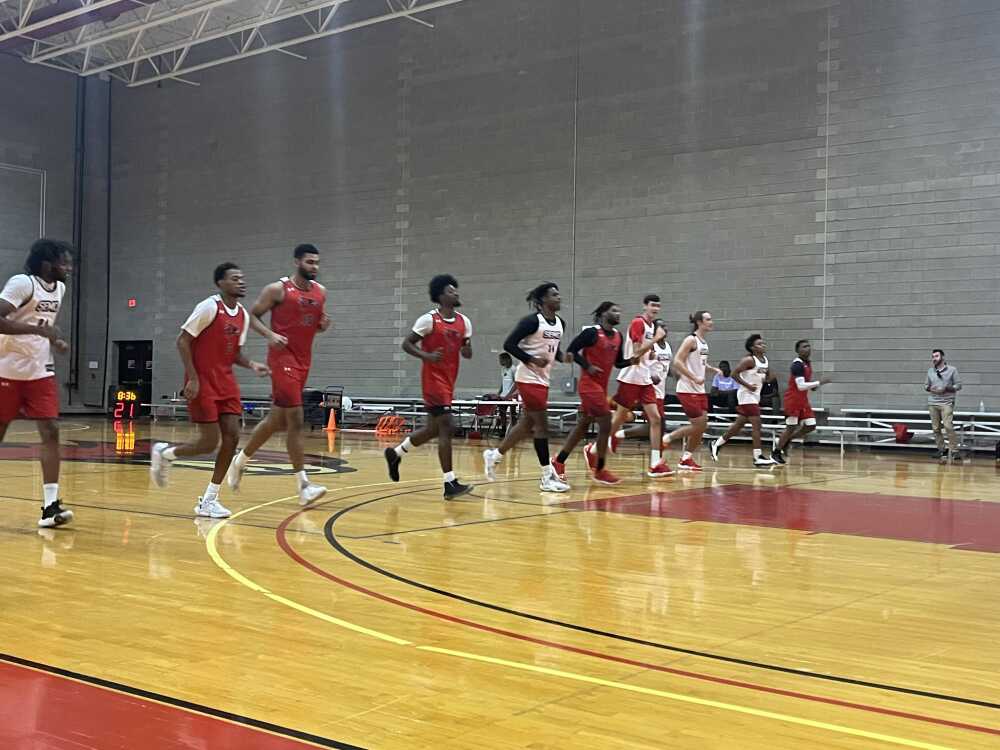 Members of the SEMO Men's Basketball team run the court during practice on Oct. 19.
Photo by Mark Grogan

As the SEMO men’s basketball season draws nearer, the Redhawks face challenges unlike any season in recent memory. Southeast will look to build off last season’s Ohio Valley Conference tournament appearance with a team that contains only five returning players, and a conference with three new teams.

SEMO basketball has many intriguing transfers, one of which is Junior forward Josh Early from the University of Tulsa. The 6’7 240 lb player adds size and strength to SEMO’s roster, which was a point of emphasis for coach Brad Korn this offseason.

Earley described himself as a steady post player who is not afraid to grab rebounds.

“You’ll see me mostly play back to the basket and grab a few rebounds. Nothing too crazy, I’m gonna go out there and do my job,” Earley said.

Among SEMO’s few returning players is sophomore point guard Phillip Russell who made the All-OVC Preseason Team after making the Second-Team and All-Newcomer team a year ago. Russel said despite having nearly a completely different team, the brotherhood among the players is stronger than ever.

Coach Korn said his squad has suffered a couple of injuries early in their practice season but does not expect the health of the team to be in doubt for the long term.

“We’re a little banged up right now (but) that normally happens. We’re looking to get a couple guys back here this week going into exhibition season and looking forward to some live action,” Korn said.

To say that the OVC looks different than it did just a season ago would be a vast understatement. Three teams, Little Rock, Lindenwood, and Southern Indiana are new to the OVC with little known about their roster to OVC veterans.

“I don’t know much about those guys to be quite honest," Korn said.” But there will be a ton of film leading up to when we have to play them come January, February.”

With Murray State and Belmont leaving the OVC in favor of the Missouri Valley, coach Korn believes anybody has a shot at the conference title this year.

“The whole league is pretty much wide open,” Korn said.”There are only three returning all-conference players from a year ago, so (new) rosters are still coming in.”

In his third season as Southeast’s head coach Korn has emphasized size and rebounding to this year’s roster in lieu of graduated center Manny Patterson who was an important part of the Redhawk’s offense last year.

The 7-foot freshman center Mason Hanback and the aforementioned Josh Earley are evidence of this effort to control the rebounding game.

Korn said the change in SEMO’s physical attributes will not necessarily change his approach as a coach.

“I think it just changes year to year in recruiting,” Korn said. "We knew we needed size and rebounding, we were depleted at that position even a year ago, so to get some of those bigger guys like that, guys that can play, that’s the biggest thing.”

You can watch the Redhawks' new squad when they host the Lyon Scots in their home opener at 4 p.m. on Nov. 12 at the Show Me Center.