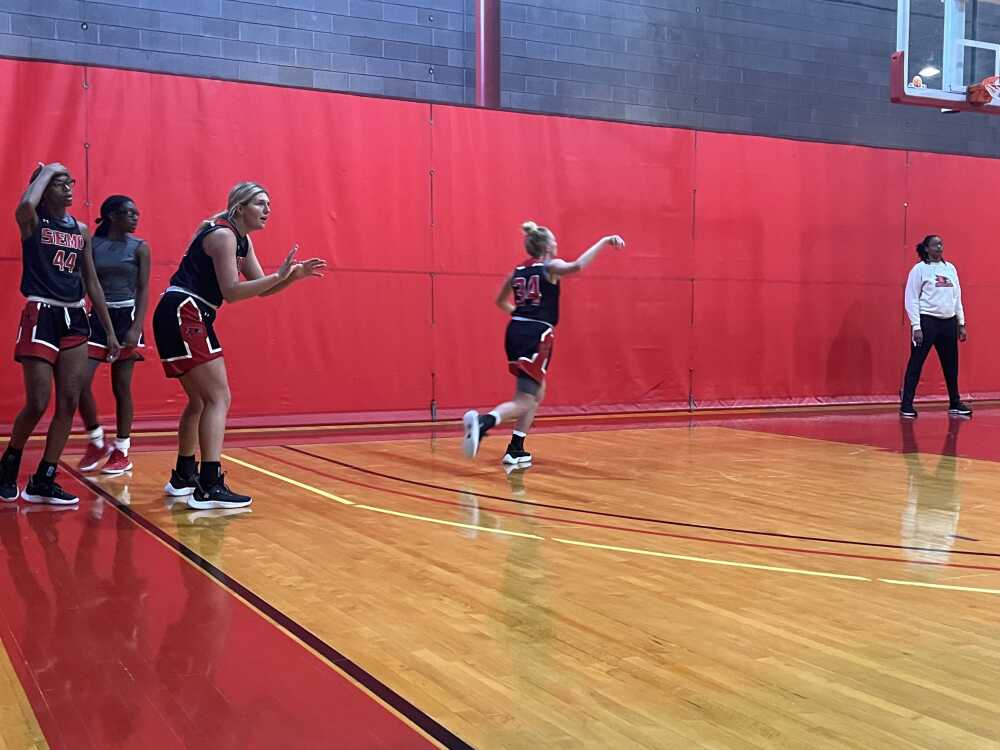 Members of the SEMO Women's basketball team run a drill during practice on Oct. 19.
Photo by Mark Grogan.

The Southeast Missouri State women’s basketball team is gearing up for the 2022-23 season. A year after what players and head coach Rekha Patterson called a “disappointment,” they are ready to step back on the court and get back to their winning days.

Defense was an emphasis during the early stages of the year. The Redhawks finished ninth last year in scoring margin with -11 and seventh in field goal percentage defense allowing .431 percent of shots to be made.

“Our defense has improved,” Patterson said. “I think their understanding of how we want to play defense is much better now than it was at the very beginning.”

Sophomore forward Kennedi Watkins was named to the preseason All-Ohio Valley Conference Team for the first time in her career. She led the Redhawks in blocks and finished second on the team in rebounds. She was named OVC Freshman of the Week twice during her freshman year and finished second in the conference in offensive rebounds per game with an average of 2.3 per game.

“It’s a big motivation. It shows that I have something to prove and that I’m capable of many things. It makes me want to go out and get it and play harder,” Watkins said.

Sophomore guard Jaliyah Green played in 24 out of 29 games last year, making 20 starts as a true freshman. She finished sixth on the Redhawks in scoring and shot .328 from the field. She also finished with double-digit scoring six times during the season.

“I see my role as someone who needs to score the basketball, be able to rebound both offensively and defensively and keep the team together and lead by example,” Green said.

This year, the Redhawks welcomed six newcomers to the team. Their chemistry has grown through practice; working together has allowed the team to know each other’s strengths and has helped them become more complete.

“The more they play together, the more they get to know each other and how they play, how they like to receive the ball, how they can score,” Patterson said. “Our returners have done a good job welcoming them and showing them the SEMO way.”

In order to get back to the top of the OVC, the Redhawks will have to face some new competition. Little Rock Arkansas, Southern Indiana and Lindenwood joined the conference this year and are looking to stake their claim in a new division.

Little Rock is already projected to finish third in the conference, followed by Southern Indiana at seventh and Lindenwood at ninth. The Redhawks have been predicted to finish eighth.

“We’re looking forward to this new OVC slate we have,” Patterson said. The expectation for this season is to get back to playing the “SEMO way.”

Competing hard, teamwork and playing tough have become staples in Redhawks basketball. They fell short of their standard last year, but they are looking ahead to a new year and an opportunity to get back to the top.

“We have something to prove,” Watkins said. “We didn’t play well last year and we know that’s not who we are. We know we are capable of more so we’re ready to put it all together and go out and have a great season.”

The Redhawks will open their season by taking on the University of Health Sciences and Pharmacy in St. Louis at 11 a.m. on Nov. 7 at the Show Me Center.