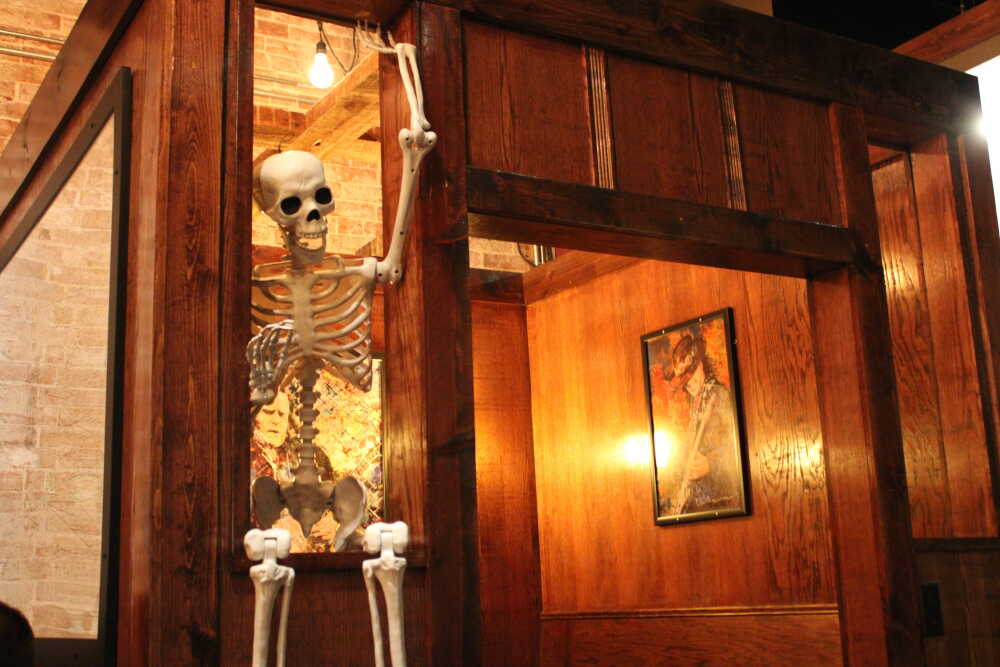 Minglewood Brewery in Downtown Cape is known among its staff to be haunted by a non-threatening spirit that makes sure to bring attention to itself in unexplainable ways, general manager Audry Helms said. This year, the entire skeleton prop was placed on a ledge rather than just the skull they had last year, as the skull seemed to be an easier target for the spirit to interact with.
Photo by Molly Phegley

Cape Girardeau’s history dates back to Lewis and Clark’s voyage down the Mississippi, the Trail of Tears, the Civil War battle, UFO landings and more. Rich history creates a rich culture, which creates a rich community.

Before media was accessible to nearly everyone, word of mouth was the dominant form of communication. Folklore helps to preserve historical events, and the excitement felt when sharing stories about the “unbelievable” has the power to pass down cultural traditions and values through generations.

The history of Cape is not only eventful, it is also filled with folklore and terrifying tales developed over decades of storytelling and shared experiences.

Author and history professor Joel Rhodes is well-known around town for his book “Haunted Cape Girardeau: Where the River Turns a Thousand Chilling Tales,” a compilation of years of history and haunted happenings in Cape.

Dating back to Native American settlers on the Mississippi River in what is now Cape, Rhodes said there are stories of a man-eating wolf prowling the banks of the river and haunting tribes in the area.

The Mississippi River has been the catalyst of much of Cape’s history, as it has allowed the town to access trade, shipping and travel, but also seems to be a stimulant in the amount of alleged paranormal activity in the area, according to Rhodes.

“Ghosts seem to need some type of energy to manifest,” Rhodes said. “And oftentimes, powerful bodies of water are the energy they need, and the Mississippi River clearly has that.”

Rhodes said some of the earliest travelers of the Mississippi spoke of seeing ghost lights and hearing voices along the river bank.

Rhodes said he believes some of the scariest stories about Cape involve river disasters, such as steamboats sinking or blowing up. He said the bodies were brought to Cape because it was the closest town between St. Louis and Memphis, Tenn., causing corpses to build up on the banks of Downtown Cape Girardeau, leaving an imprint of lost souls on the small town.

Throughout Cape’s history, many spooky stories have developed their own personality. Some of the most notoriously scary stories are tied to the Old Lorimier Cemetery, the Sherwood-Minton House and the Glenn House, bringing attention from paranormal TV shows and even the famous paranormal investigators Ed and Lorraine Warren.

Over the years, ghost hunters and tourists gawked at these infamous locations with wide eyes and uneasy stomachs, but much of the local folklore of Cape resides within places often frequented by everyday people.

The river makes Downtown Cape Girardeau a hotspot for paranormal activity, but how often do people unknowingly find themselves sitting next to a ghost when out for a drink with friends or enjoying brunch with family?

Port Cape Girardeau is one of the more well-known downtown establishments with a haunted history. If someone were curious, all they’d have to do is ask one of the bartenders about the last time they saw “Bell.”

There are a couple of theories as to who “Bell” used to be, but she is known as the ghost of Port Cape, who got her name from ringing the bell behind the bar to communicate. Christy Mershon, director of Continuing Education at SEMO and board president of the Glenn House, has told the story of “Bell” during her ghost tours for many years.

Mershon said the most popular story of “Bell” is that during the Civil War, Ulysses S. Grant indulged himself in a mistress in his third floor office of what is now Port Cape, but once he left town, she was so distraught, she threw herself from the window of the third floor.

Many of the employees of Port Cape have reported encounters with “Bell” throughout the years. Current bartender Taylor Park and bar manager Bill Dunn said they’ve experienced feelings of extreme unease in the third floor office of the building. Park said she has heard a woman whispering to her in the hallways, and customers describe hearing the sinks turn on by themselves and footsteps in vacant bathrooms.

Park said a medium once visited the restaurant and told her “Bell” is much fonder of the female employees. The medium said “Bell” finds it “very cute” how some of them sit at the bottom of the stairs to read on slower days, which is information the medium could not have gathered on her own, considering it was a very busy day.

Port Cape isn’t the only place downtown where you can sit down for lunch with a side of grits and ghouls.

Katy O’Ferrell’s front-of-house manager Logan Ray said he has heard stories of ghosts and even experienced unexplainable situations himself. Ray said the second floor of the restaurant used to be an opera house and is now home to multiple spirits he catches laughing, stomping and sometimes speaking to him after hours.

Minglewood Brewery in Downtown Cape also has haunted stories passed down from staff member to staff member throughout the years. General manager Audry Helms said she has witnessed multiple instances where a ghost has made contact with employees and customers.

“I’ve never felt threatened, but almost as if there was a point to be proven about something by the presence,” Helms said. “Someone or something — or whatever it is — was opinionated about something that happened in the building and would respond according to the circumstances.”

During Halloween of 2021, Minglewood had decorations up all over the building, but the only decorations ever messed with were the skulls, Helms said.

“One night, there was one on the banister of the bar, and it quite literally flew off and hit someone in the head,” Helms said. “Everyone kind of laughed it off and asked if we had ghosts, and we’re all laughing like, ‘Yeah, actually we do.’”

Helms was lucky — or unlucky — enough to have not only one, but multiple eerie occupations. During Helms’ time working at Bella Italia in Downtown Cape, she said she was often the first person to arrive in the mornings. Helms said she would experience tugs on her shoulder while sweeping and a woman’s voice speaking to her in passing. She soon found out the rest of the staff also experienced strange happenings with whom they called “Bella Ghostie.”

Christy Mershon said she has become very familiar with the many stories of haunted Downtown Cape and mentioned multiple other establishments with possessed pasts, including the Indie House, Annie Laurie’s Eclectic Emporium and Shivelbine Music Store.

Shivelbine Music Store carries folklore from the days when it was a crematorium with underground tunnels leading to the funeral home where Annie Laurie’s used to be, Mershon said.

Before there were sanitary regulations in place, the crematory left buckets of blood outside the back door, which collected swarms of bugs and in turn quickly attracted a colony of bats, Mershon said.

At the time, there was a popular bar at the end of Frederick Street, and people would walk past the crematory every night on their way to the bar. Once the buckets of blood were taken to be dumped in the river, the bats would turn their focus toward the mosquitos following drunken pubcrawlers, Mershon said.

This colony of bats was soon twisted into a scary story of blood-sucking bats that haunted Frederick Street and still reside in the third floor of the Shivelbine building to this day, Mershon said.

These tales find a way to hold on to life years down the line, now entertaining the great-grandchildren of storytellers from decades past. The folklore of Cape Girardeau has created a community between locals and spook-seeking visitors, allowing for people to come together to share stories, laughs, speculations and the rare fright.

To experience these ghost stories on your own, check out the Glenn House’s ghost tours or the Boos on Broadway tours.