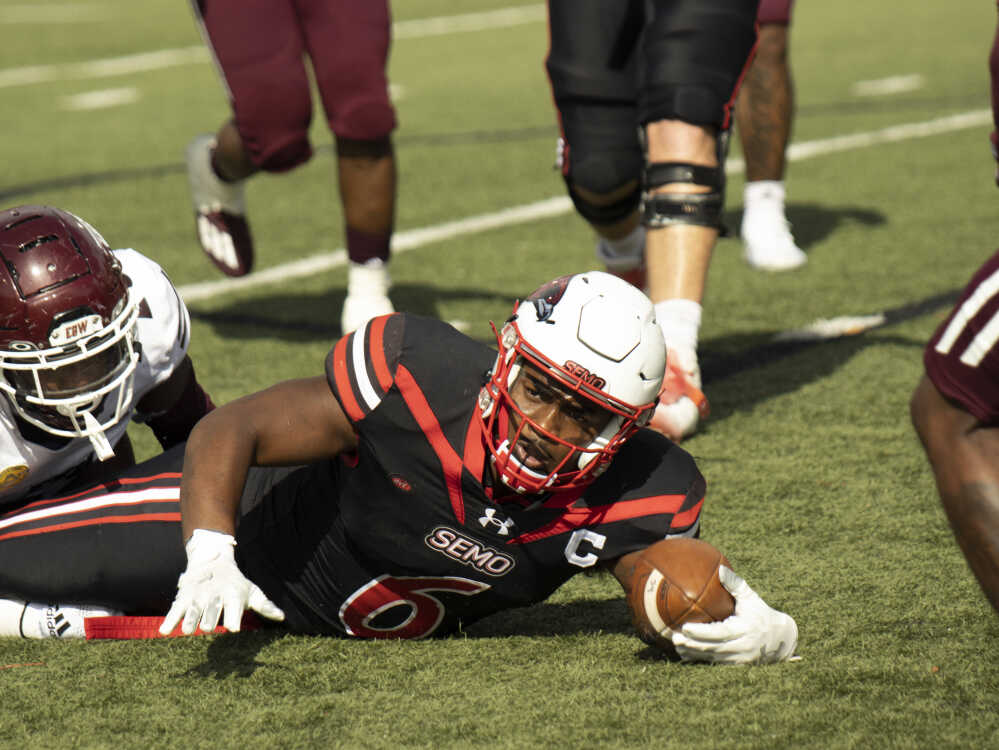 Running back Geno Hess (6) gets taken down by a Eastern Kentucky Colonel while he tried to make his journey to the end zone at their Homecoming game on Oct. 29.
Photo by Nathan Gladden

The Southeast football team was defeated by Eastern Kentucky University 28-23 in the SEMO Homecoming game on Saturday. The loss takes the Redhawks to an overall record of 6-2 and an Ohio Valley Conference record of 2-0.

Junior wide receiver Ryan Flournoy had the best day of his SEMO career, totaling 256 yards and a touchdown. Flournoy gave all the credit for his big day to his teammates and the coaching staff for putting him in a position to make plays.

“It was everybody being on point, we were calling the right plays, making the right reads, and blocking well,” Flournoy said. “It was really just a team effort.”

Flournoy and the rest of the Redhawks' offense got off to a good start in the first half by scoring 10 points on their first two drives and then taking a 13-0 lead into the locker rooms at halftime. SEMO junior kicker DC Pippin went 2-2 on field goal attempts and 1-1 on extra point attempts in the first half.

Redhawks head coach Tom Matukewicz said even though it was a two-score game at the half he was disappointed.

“It was a two-score game when we were down there a bunch. We had the fourth and one and got nothing and we had to kick a couple of field goals,” Matukewicz said. “If those are 21 points it’s a totally different game, so I was nervous at half time but it’s a good opponent so we were nervous the whole game.”

In the second half, the Colonels came out hot, scoring a touchdown on their first drive then forcing a SEMO fumble and scoring again to go up 14-13 early in the third quarter. The Redhawks were able to get the lead back off another field goal from Pippin but found themselves down 22-16 at the start of the fourth quarter.

SEMO’s defense could not get anything going in the second half, allowing EKU to score on every drive they had. However, they managed to hold two of those drives to just three points.

SEMO sophomore linebacker Bryce Norman said the team really struggled on third down and allowed the Colonels to get extra first-down chances.

“We got them to third down, third and long I don’t know how many times,” Norman said. “On one drive they had three third downs and converted on all of them, so we just gotta get better at that.”

The Redhawks had an opportunity with one minute and 19 seconds left on the clock to put together a game-winning drive. Southeast would get down to the EKU 29-yard-line after a catch by senior Pervis Frazier before sophomore Paxton DeLaurent threw an interception in the endzone. The Colonels would take over at their 20-yard-line and run out the clock, ending the game.

The Redhawks are on the road the next two weeks before closing out the regular season with a home game against Murray State University on Saturday, Nov. 19.