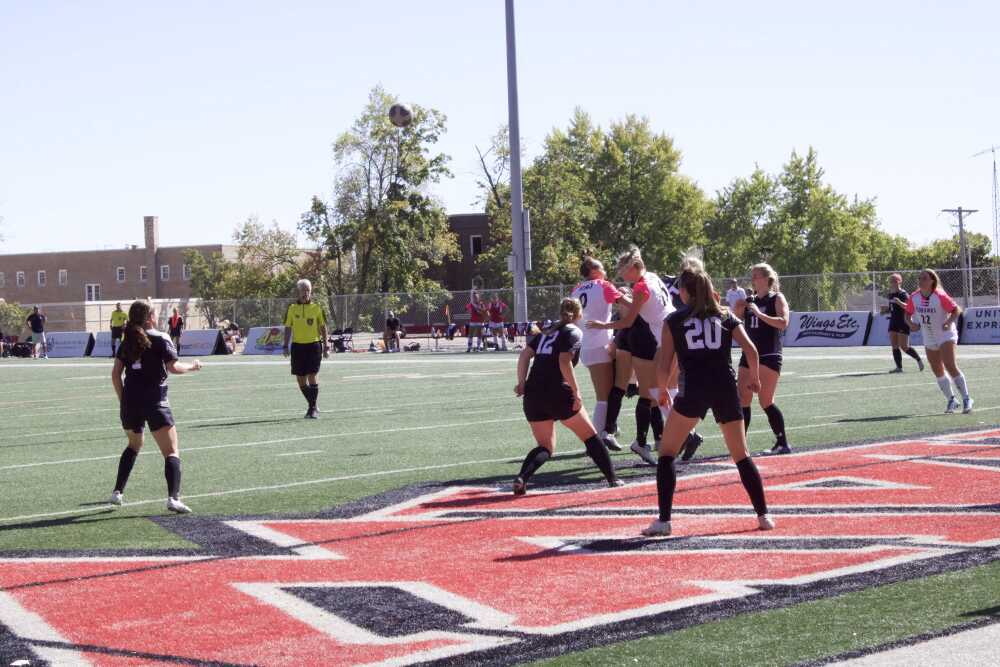 Freshman forward Cayla Koerner (9) and freshman defender Alayna Jakul (16) both attempt to head the ball during a game on Oct. 2.
Photo by Jeffery Long.

Entering the 2022 season SEMO freshman forward Cayla Koerner had big expectations to perform at a productive level, but by the year's end shattered those expectations finishing the season with an Ohio Valley Conference-leading seven goals.

Koerner got her opportunity on the field immediately starting for the Redhawks in the first five games of the season. Through eight games, Koerner only had one goal to show for, but that changed beginning with her Sept. 22 game against Eastern Illinois she scored six goals in five games for the Redhawks.

Head coach Heather Nelson said the extra work Koerner put in with graduate assistant Esmie Gonzales is what provided the change for her in the later part of the season. Gonzales is a former SEMO standout who scored 21 goals in 54 games for SEMO from 2017-19.

“[Working with Gonzales] I think that provided just that little extra addition of confidence for her,” Nelson said.

Koerner said the late-season improvement was from her being more comfortable on the field with her teammates and how they played.

“We just all connected on a different level and just started to play each of our own games,” Koerner said.

According to Coach Nelson, the game that Koerner impressed her the most was when SEMO faced Southern Indiana. Koerner scored the game-winning goal with less than 20 seconds left to play, but Coach Nelson said it was something else that impressed her about that performance.

“I can hardly think of a time where she didn’t pick out the right pass, the right way to pass, or the right decision on the field for her to either take on or to play somebody else in,” Nelson said.

The numbers say Koerner finished the season with only one assist, but Coach Nelson said you have to look beyond the stat sheet when analyzing Koerner’s ability to make plays for others.

“Some people look at her stats and think she’s just a goal scorer, but she actually scores goals and creates opportunities for our team at a very high level,” Nelson said.

Redshirt junior forward Megan Heisserer said Koerner’s speed is what truly separates her from the field.

“I wish I had her speed. She’s super quick and she can get by anyone,” Heisserer said.

Koerner’s play was recognized, earning her the 2022 OVC forward of the year, OVC freshman of the year, All-OVC first team, and All-OVC newcomer team.

Koerner and Coach Nelson expect more of the same, if not more improved play from Koerner in the 2023 season.

“I expect her to continue to make really good strides next season as well as she gets more comfortable in our league and continues to get more dominant,” Nelson said.