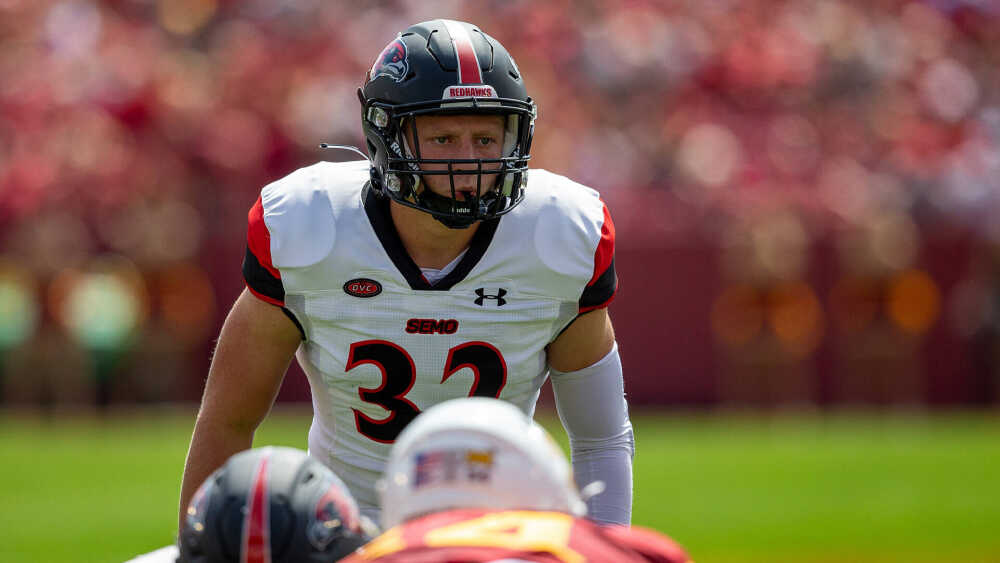 SEMO football has enjoyed an impressive season thus far, posting their most wins since 2019. They currently have the most wins in the Ohio Valley Conference. While offensive stars like sophomore quarterback Paxton DeLaurent and senior running back Geno Hess have frequently appeared in the headlines, another top performer for the team has been sophomore linebacker, Bryce Norman.

Norman currently leads the team with 85 tackles, which puts him at third in the OVC. SEMO head coach Tom Matukewicz said what makes Norman stand out from the rest is his ability to process the game.

“[Norman] flies around like he’s a great athlete because he could process the game really, really fast, and that’s what you want defenders to be able to do,” Matukewicz said.

Norman first showcased this talent last season when he led the Redhawks in tackles as a freshman. Matukewicz said this was due in part to a number of injuries SEMO football players dealt with a year ago.

“It’s a little bit of our season a year ago, we had a lot of injuries and that gave him that opportunity,” Matukewicz said.

Although there were bumps along the way, Matukewicz said this experience was extremely valuable for Norman to be able to develop into the player he is.

“He’s so much farther along because of all the reps he took as a freshman, and we’re getting that benefit this year in his sophomore season,” Matukewicz said.

Matukewicz is not the only one impressed by Norman’s performance and rapid improvement. SEMO linebacker Connor Benado had nothing but praise for Norman’s constant improvement from his freshman season to where he is right now.

Norman said this ever-improving understanding came from all the preparation that went into his offseason.

“I was just focused on really learning the game better. Coming into freshman year, I kind of got thrown in the fire a little bit, so this year is just more focused on the game and working on my fundamentals,” Norman said.

These improving ‘fundamentals’ were on full display Nov. 5 against the Tennessee State University Tigers. Norman led the team with 12 tackles as SEMO dominated the field against the Tigers 42-0.

Norman had one of the key plays of the game for the Redhawks defense. With TSU driving down the field facing third and goal at SEMO’s two-yard line, Norman hurried TSU quarterback Draylen Ellis, forcing him to throw an incomplete pass. This play forced the Tigers into a fourth and goal situation, in which they failed to convert, and kept SEMO football’s shutout intact.

With Norman constantly making impact plays like this on a weekly basis, Benado said he’s seen the sophomore linebacker develop a growing confidence in his game.

“He was kind of the new kid on the block last year, and he’s got a little bit of a swagger to him,” Benado said.

Norman and the Redhawks will be back in action at Houck Stadium Nov. 19 for their season finale against Murray State.