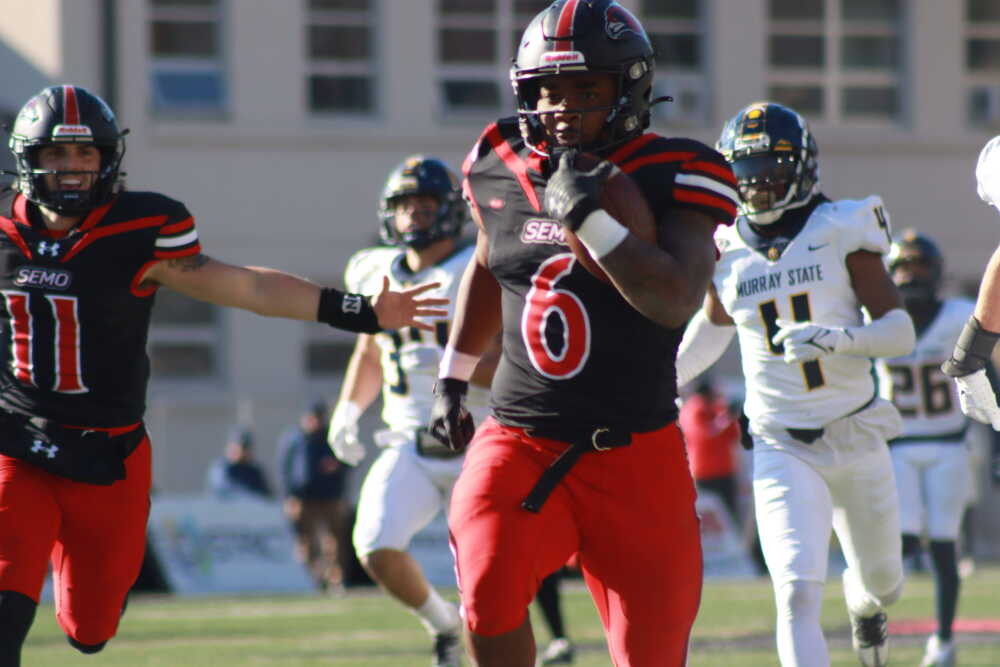 The Southeast Redhawks defeated the Racers from Murray State University 52-22 on Saturday, Nov 19. in their final game of the regular season to win a share of the 2022 Ohio Valley Conference title.

Head coach Tom Matukewicz said he made sure his team knew not to look at Murray State any differently because of their record coming into the matchup (2-8).

“I just wanted to make sure that we didn’t do anything different,” Matukewicz said. “We know what it takes to be successful, but just finish and leave no doubt.”

The Redhawks started the game on defense, but the Racers’ drive didn’t last very long. Junior defensive back William McCall caught an interception on just the third play of the game and ran it 49 yards for a touchdown. Junior kicker DC Pippin completed the extra point, and this immediately put the Redhawks up 7-0 after only 1:25 into the game.

“I was just playing every snap like it was my last snap,” McCall said. “Every snap is limited and there’s no telling when it can be your last so I start the game knowing that.”

The defense was led by sophomore inside linebackers Bryce Norman and Christian Fuhrman, and junior inside linebacker Jacob Morrissey. Norman had 12 tackles, and Morrissey and Fuhrman both added eight each. Senior defensive back Lawrence Johnson followed closely behind with six total tackles.

Norman also forced a fumble in the third quarter. Christian Fuhrman recovered the fumble and was able to run just a yard.

Senior running back Geno Hess ran for four touchdowns in the contest. Hess had 26 carries and racked up 317 yards. He is now the SEMO and OVC leader for single-game yards.

The Redhawks finished the regular season with a 9-2 overall record and 5-0 conference record. SEMO shares the OVC title with the University of Tennessee at Martin Skyhawks, but the Redhawks will go to the Football Championship Subdivision Playoffs due to a tiebreaker coin flip they won after the MSU contest.

Coach Matukewicz and the Redhawks will find out who their next opponent will be on Sunday Nov. 20 as they head to Dogwood Social House in Cape Girardeau for Selection Sunday. It is open to the public, and doors open at 11 a.m.