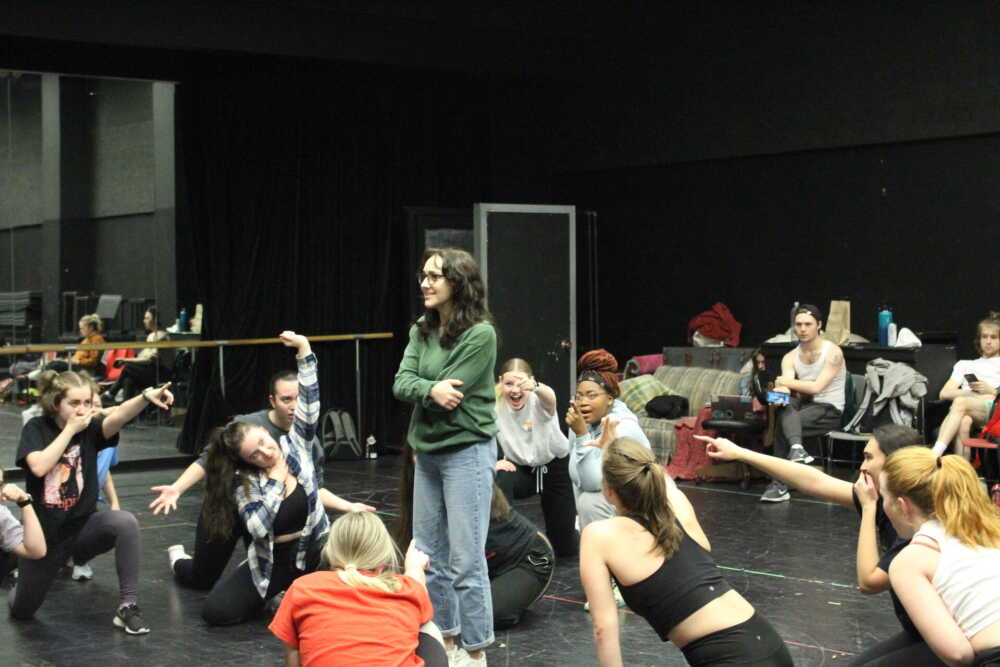 Sophomore musical theater major Caroline Nitardy surrounded by Carrie cast members during a rehearsal. Nitardy has been preparing for the role by reading the Stephen King novel the musical was based off of and exploring the complex emotions behind the character.
Photo by Lizzy Stock

In SEMO’s rendition of “Carrie: The Musical,” religion, blood and psychic abilities are woven together to tell the chilling coming-of-age tale. The musical will be performed Dec. 7-10 at 7:30 p.m. and Dec. 10-11 at 2 p.m. at the Wendy Kurka Rust Flexible Theatre at the River Campus. The Friday, Dec. 9, performance is already sold out.

Carrie is a powerfully emotional character created by the imagination of author Stephen King. Throughout the musical, she faces hardships such as school bullies, an overbearing mother and reining in her newfound psychic abilities.

Sophomore musical theater major Caroline Nitardy plays the role of Carrie in SEMO’s rendition. Nitardy has been preparing for the iconic role by reading the original Stephen King novel and learning to implement the loneliness of Carrie into her acting.

Nitardy said she’s been incorporating the essence of Carrie finding confidence and becoming more independent from her tyrannical mother into the emotion behind her character’s transformation.

“I’ve also been playing with the idea of blood in the show, because the show starts with her getting her period and ends with her getting blood dumped on her, and in those circumstances, her powers come out,” Nitardy said. “This trance kind of comes over her, and it’s really cool how blood has something to do with her powers and how it strengthens her.”

Nitardy said she has found it important to “de-role” after practices to separate herself from the intense emotions of Carrie’s character. De-roling consists of exercises like deep breathing and meditating after a rehearsal to help bring the actor back to themselves, so they do not attach to the character.

As with Stephen King stories, the characters may resemble average people at first glance, but there are many layers of complexity to their roles.

Junior musical theater major Jared Ritter plays the character of Tommy, whom he described as the classic “golden retriever” boy who is “dumb of brain, but full of heart.”

“He's more than just a guy who plays football and plays baseball,” Ritter said. “The show sort of takes on a lot of stereotypes of old high school teen movies like ‘Breakfast Club’ and stuff like that, and turns it on its head.”

Junior musical theater major Sarah Grosse has taken on the character of Sue, who begins the musical as a bully and throughout the development of the play realizes how her actions have impacted Carrie’s character.

“When [Sue] finally wakes up, she sees what she's doing is truly hurtful,” Grosse said. “I've been exploring how hard that is for her to process — the fact that she's been inflicting so much hurt on this person.”

While the growth of the characters in “Carrie: The Musical” creates a new perspective for viewers, it has also become a test for the actors to immerse themselves in the emotion and personality of their roles. To witness these complex characters, tickets can be bought online through the SEMO website or by calling the River Campus Box Office at (573) 651-2265.