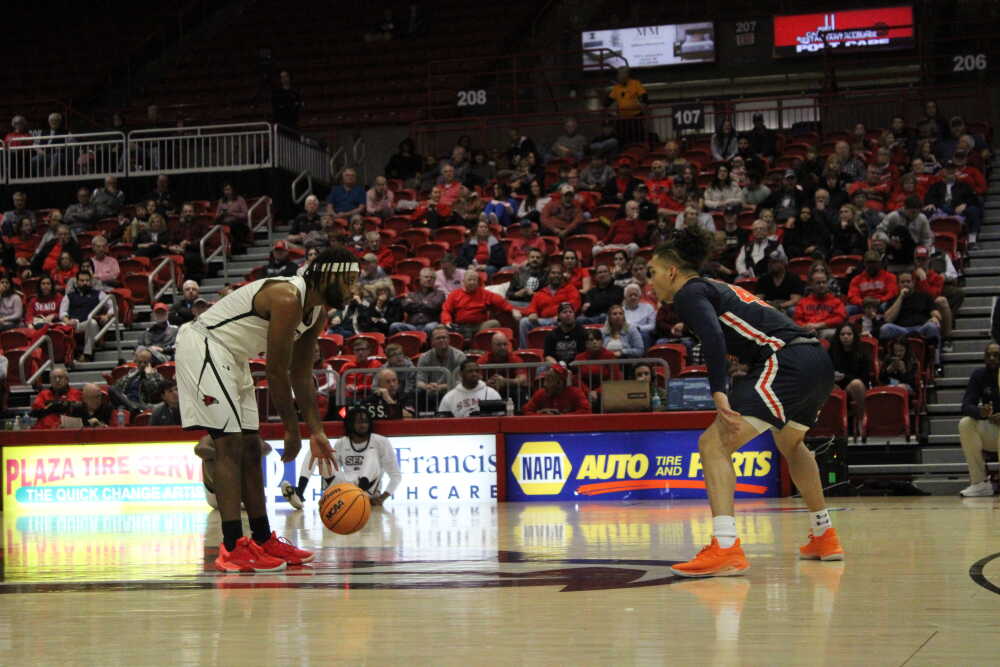 In the midst of a poor shooting performance, Redhawks basketball dropped the first of a three-game homestand to the Skyhawks, 60-80, at the Show Me Center on Jan. 19

Southeast shot just 32% from the field and 14% from beyond the arc, going 3-22. The Redhawks jumped off to a 3-0 start after a field goal and free throw from senior center Nate Johnson who ended the game with nine points, four rebounds and two blocks.

Southeast struggled afterward in the first half, missing their next 13 shots. This seemed to be the tale of the Redhawks’ game as they went through multiple scoring droughts throughout the game lasting over three minutes. Southeast leads the Ohio Valley Conference (OVC) in scoring in conference play at 80.6 points per game but could not keep up the same momentum against UT Martin.

Senior guard Chris Harris said there were many reasons for their low-scoring game.

“There was a lack of communication and lack of ball movement, so we could not really get it going offensively,” Harris said. “A lot of what we do comes off everybody touching the ball doing what they do best, but tonight we were a little stagnant, not playing to our strengths.”

Southeast was without their leading scorer in sophomore guard Philip Russell on Thursday due to an ankle injury. Redhawks head coach Brad Korn said Russell's absence was felt on the team.

“Obviously, having Phil out didn’t help things, and finding out right before the game kind of put us in a tough spot,” Korn said. “It’s one of those things too if you had a little more time to prepare for it, you could adjust a little bit. Putting guys in different spots they haven’t been in at this point in live action is not ideal.”

Branson said the key to his team recovering from this loss and taking advantage of their next two games at home has to do with their approach.

“Our approach tomorrow during practice is going to be big for us. We must have a good day of practice so we can bounce back and defend home court,” Branson said. “Losing at our home court, especially by this margin, is unacceptable.”

This was the second matchup of the season between Southeast and UT Martin in which the margin was much closer. UT Martin walked away with the win at home on Jan. 5, with a score of 87-82.

Harris said Thursday night was a "tough loss" but knows a comeback is possible.

“We just came off a win streak. We know that we are more than capable of going on another one, so we have to understand that this is not the end of the world,” Harris said. “There’s always more basketball to be played, and the best thing about it is that there is always another day.”

The Redhawks will return to action to face Tennessee Tech at the Show Me Center on Jan. 21. SEMO sits at 9-11 overall, and 4-3 in the OVC.