The Tau Kappa Epsilon fraternity has recolonized on Southeast's campus

After a 24-year absence, Tau Kappa Epsilon has recolonized on Southeast Missouri State University's campus for the fall semester. 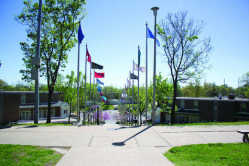 As one of the original fraternities on campus and as one of the world's largest social fraternities with chapters on more than 270 campuses in the United States and Canada, the organization saw the opportunity to come back to Southeast and took it.

With a tremendous amount of alumni support throughout the Cape Girardeau area, the fraternity hopes to gain resources from its previous members who were initiated before it left campus 24 years ago.

With the leadership of Gabe Espinosa, the fraternal services specialist responsible for the growth and development of chapters in each of Tau Kappa Epsilon's four regions, the fraternity has already recruited several members.

Espinosa not only hopes to gain quality members but plans to reach out to the 89% of Southeast students who wouldn't necessarily think about joining a Greek organization.

Tau Kappa Epsilon is a fraternity that left campus 24 years ago, but decided to return earlier this year. The organization is beginning to find a foothold in the Greek community.

"I think a lot of people just don't go Greek because they were never asked," Espinosa said. "I think establishing genuine relationships with those students and presenting that offer and giving everyone that opportunity is a great thing to be able to do."

"This first year will just be really focusing on member development and what it means to be a [Tau Kappa Epsilon] and how to run a chapter and all that stuff that a lot of the other fraternities already have, so a lot of it will be nurturing the group right now," Espinosa said.

Once the fraternity establishes their first new-member class, Tau Kappa Epsilon will then become a "colony" on Southeast's campus. Then it will become a fully functional chapter when it is recognized by the national organization and when it receives a national charter.

The newly reestablished fraternity has been welcomed back by the Southeast community in a positive way.

"SEMO has been so welcoming, and I think the overall reaction from other Greek students is 'Oh, [Tau Kappa Epsilon] is coming back,' and it's been overall very positive," Espinosa said.