Mogley and Kennedy return to SGA for second term 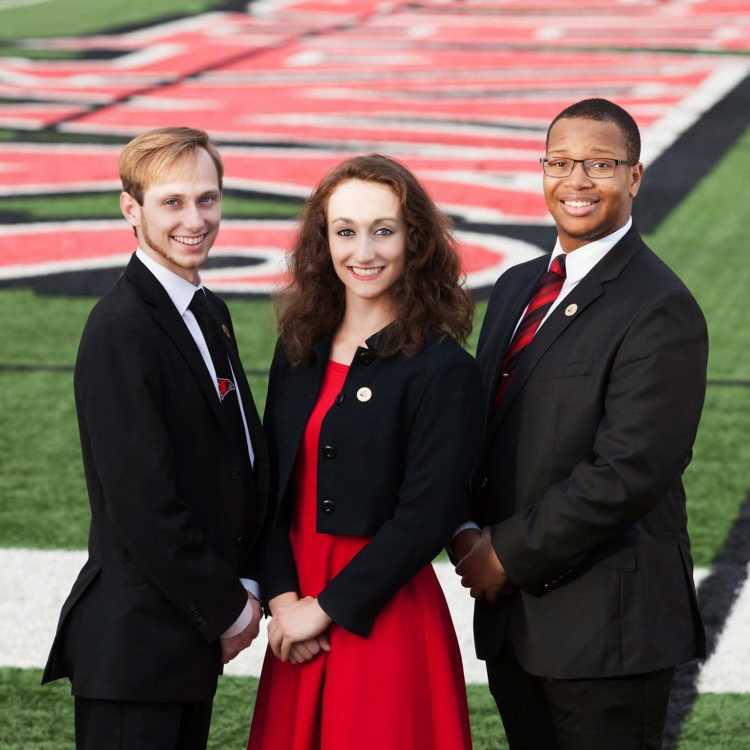 Dylan Kennedy (left) and Peyton Mogley (center) are returning to Student Government Association for the 2017-2018 academic year as vice president and president. They will be joined by their new treasurer Andre Parker (right). Submitted photo

Peyton Mogley and Dylan Kennedy are returning to the Student Government Association at Southeast Missouri State University for a second term as president and vice president.

Last spring, Mogley and Kennedy beat out their opponents Doug Hamlin and Sierra Heil after running on a platform of "Respect. Recognize. Represent." The two were joined by Brooke Reeves, who won an uncontested race for treasurer.

Mogley and Kennedy -- both juniors studying corporate communications -- said they consider their first term to be a learning term and a time to adjust to and learn about their positions, while next year will be a year of implementation and building upon the roles they established this year.

This year, Mogley and Kennedy ran uncontested and are joined by a new treasurer, Andre Parker, who served as one of five first-year senators representing the freshman class this year.

The team's goal is to implement the new strategies that were established by the senate this year and continue building the ideas that haven't yet come to fruition. Over the past academic year, SGA changed a number of its bylaws to increase the efficiency of the organization and to improve the relationship senators have with one another and with students.

Mogley, Kennedy and Parker ran on a platform of three simple words they call the "three I's": "Impact. Improve. Include."

Mogley said the simple message has a deeper meaning that encourages senators and students to use their voices to inspire change at Southeast and inspire students to bring their ideas to SGA for discussion.

"It really means 'I as in me, and me unto we,'" Mogley said. "What I mean by that is I think we really started to realize that change starts with you as a person. When you realize the magnitude at which you can inspire change and how capable you are at pursuing change, the possibilities are great. What we want people to be aware of is just how powerful their voices are when inspiring change."

One of the team's main goals is to increase the visibility of SGA on campus and to include other members of the student body in senate decisions. This year, senators were encouraged to meet with students in their college or school, but next year they will be expected to go even deeper by encouraging every student in the senate and outside of SGA to make a difference in the campus community. SGA members also will be tackling issues related to the budget cuts the university may face next year.

"If we could sum up what we really want to do next year, I would say we just want to keep moving forward at the pace we're going," Kennedy said. "We've made a lot of internal structure changes, but what we're really looking forward to is moving forward and maybe even increase in speed."

The re-election of Mogley and Kennedy has been met positively within SGA.

Reeves has served on senate for three years and is the senior-most member of the organization. After serving on SGA under three administrations, she said she's seen an increase of activity, one-on-one support and student interaction with the Mogley and Kennedy administration.

She added that the accomplishments of the administration can be credited to the motivation and passion for the university that Mogley and Kennedy have.She said the ideas Mogley was able to bring to the table provided a freshness to the organization.

Reeves added the success of the administration could also be attributed to their strong friendship and their endless support for every senator and executive member.

"It's nice to know we have that support and we have those people to go to with any issues we have," she said.

This year, SGA hosted a number of panels to learn about the relationships between student organizations and hosted the "SEMO Speaks" series that allowed senators to meet with members of their colleges to discuss their concerns and ideas. Both projects were tools the administrative team used to increase the visibility of SGA but also increased the amount of student feedback senators could take back to the entire senate.

Mogley, Kennedy and Parker said they are looking forward to and have already begun planning events for next year.