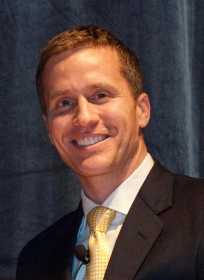 Eric Greitens
Photo courtesy of the US Coast Guard Academy

On Jan. 22, Governor Eric Greitens laid out his ideal budget for FY19.

The proposed budget, $28.8 billion in total, would cut $68 million from higher education for both two-year schools and universities. Greitens recommended Southeast receive $41,409,529, which would be a $4.6 million cut from appropriations in FY18. Recommendations for core funding set aside for Southeast is $4,140,953 based off the university’s achievements.

“The budget we’re introducing today is a common-sense, conservative budget,” Greitens said during a press conference Monday, originally reported by the St. Louis Post-Dispatch. “We’re watching out for the tax dollars of the people of Missouri, making important investments in Missouri’s future and also making tough decisions.”

While many cuts will be made to higher education, Greitens has increased the amount of funds to elementary and secondary education by $87.5 million.

“We cannot continue to balance the budget on the backs of students; they are the future workers and job creators Missouri desperately needs to cultivate,” said Sen. Caleb Rowden, a Columbia Republican, on reported by the St. Louis Post-Dispatch. “Continuing to neglect our public colleges, universities and trade schools seriously hinders Missouri’s ability to compete.”

Other suggested increases include a $162.8 million spend on roads and bridges and match grant funds for local communities for roads and other infrastructure.

The proposed budget is more than $200 million over the current budget, however, there is no plan to raise taxes, an issue Greitens campaigned on.

“But no amount of budgetary sleight of hand can obscure the reality that years of tax cuts for corporations and special interests have left Missouri without sufficient money for the basics,” said House Minority Leader Gail McCann Beatty, D-Kansas City, originally reported by the St. Louis Post-Dispatch.

Another proposal was to cut 91 state positions and $500,000 from state subsidy for Amtrak service between Kansas City and St. Louis.

Announcing his budget recommendations, Greitens was making his first public appearance since Jan. 10 when news of his extramarital affair with his ex-hairdresser during 2015 came to light.