Rane Belling wants to fly the transgender flag on March 31 over Academic Hall.

The flag would fly below the United States flag on National Transgender Day of Visibility.

Belling is doing all they can to give the students of Southeast a visual reminder of transgender visibility. 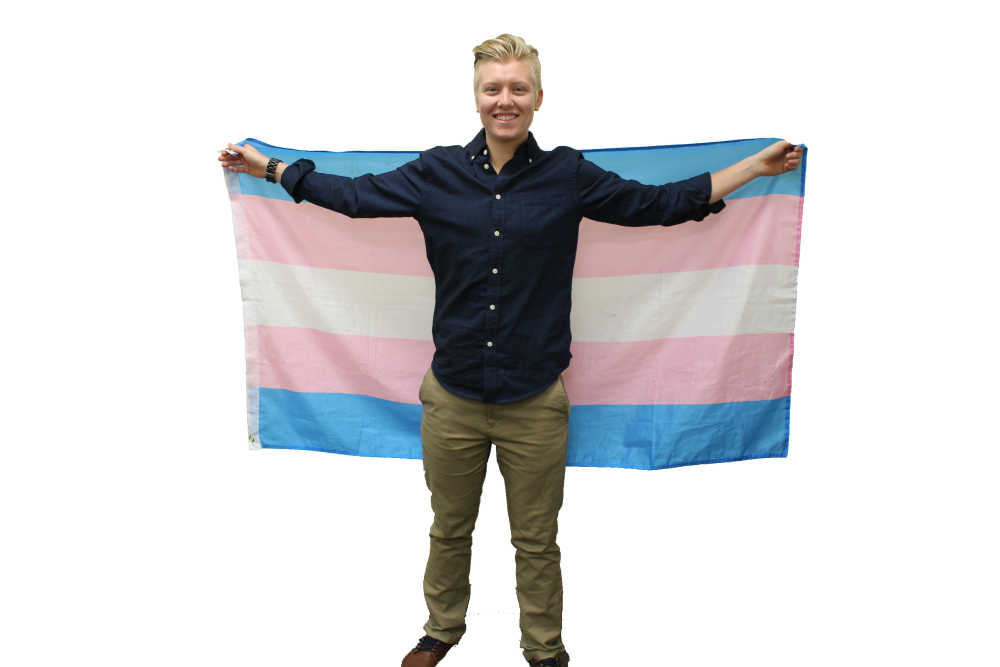 Rane Belling raises the transgender flag behind them in the Center for Student Involvement on March 19, 2018.
Photo by Rachael Long

As the graduate assistant for LGBTQ+ Education, Belling is highly involved in campus events which promote understanding and awareness of issues facing marginalized groups on campus. But now they are trying something new, something that would bring attention to transgender visibility.

Flying the transgender flag over Academic Hall is not as simple as it sounds, though, and Belling may face some obstacles due to state and federal regulations.

Sonia Rucker is Belling’s supervisor along with being the assistant to the president for equity and diversity and dean of students. Belling said Rucker has been helping them navigate the process of potentially flying the flag and has been in contact with Amanda Woods in the Office of Military and Veteran Services.

After doing some research, Belling said Woods explained the only other flags or pennants flown with the American flag are the state flag and the POW/MIA flag. Furthermore, Woods explained that the State of Missouri provides direction for Southeast under a regulation, the 2008 Display of National and State Flags.

That regulation provides guidelines for the order of displaying flags on a single flagpole, where the national flag should be flown on top followed by the POW/MIA flag and then the state flag.

Belling said Woods saw no discretion provided to display flags not approved through the Office of Administration on flagpoles meant to represent the State of Missouri. Woods instead offered Belling with a few suggestions to move forward.

What Belling now faces is a crossroads. They could pursue the Office of Administration for direction and guidance on how to fly the transgender flag that would remain in compliance with state regulation and hope for the best. That could even mean hanging the flag directly on the Academic Hall columns rather than on the flagpole. Or they could look to another unoccupied flagpole on campus.

Belling is considering the flagpole in front of Houck Stadium as a possible alternative, although it is not their preferred option.

In other words, if one flag flies, they will all have to fly.

Belling said they understand why this would cause university administration to hesitate, but the idea of having to fly the transgender flag elsewhere on campus is a disappointing blow.

“You know, I had the idea that it would fly proudly in the center of our campus so it’s a little disappointing,” Belling said. “But the administrators who are making these decisions are supportive. I know Dr. Vargas is an ally to the trans community and every community.”

It would be disappointing because it’s not the visibility for the flag they were hoping for. But Belling isn’t the only one who wants to see the flag wave proudly in the heart of campus.

Emmett Poss is a transgender man and Southeast student who understands the importance of visibility. Like Belling, Poss said he would like to see the flag flying outside Academic Hall.

But he isn’t holding his breath.

Poss moved to Cape Girardeau from a small town and since his freshman-year transition, he has seen firsthand the dangers which come from public misinformation about a group of people. He’s been followed home, attacked in bathrooms and he’s even been issued death threats. The campus of Southeast, he said, was a safe zone.

But there is still work to be done, Poss said. For him, visibility is about being acknowledged, understood and respected. Flying the transgender flag on campus, he said, would go a long way to help improve transgender visibility on campus, even if it might “open up a can of worms.”

“That flag, a lot of people may not understand, but to those of us that actually, you know, are transgender...I know it will make us feel like we matter, that we’re seen, that we’re respected, that we’re loved,” Poss said. “That’s all anybody ever really wants.”

Belling said there will likely be people on campus or in the Cape Girardeau community who don’t want to see the transgender flag displayed at the university.

For Poss, rejection from society is not new but a familiar feeling and one to which he’s grown callous. But public misunderstanding of the transgender experience can be changed for the better, Poss said, just be asking the right questions.

Being mindful of social situations and asking questions in a respectful manner is the best way to combat ignorance, Poss said.

“It’s all about education because if people don’t know and they don’t understand, rather than completely shunning them or blocking them out, talk to them,” Poss said.

In the office of LGBTQ+ education, Belling knows how important education is to social progress. So whether or not the flag flies, they are planning educational events to help students understand the importance of transgender visibility.

Poss said this kind of education can spread back to the communities of college students who have come to Southeast from elsewhere.

“All I’ve ever wanted was to matter,” Poss said. “It’s lonely. So being able to see that flag, it will help me feel like I matter and that the university cares about me, and I’m loved and cherished, and my life matters.”

Whether or not the transgender flag flies is something that will reach beyond the walls of Southeast and into the community.

Olivia Fridley is a Cape Girardeau native and a transgender woman. Unlike most families, her brother is also transgender. So she knows the challenges transgender people have with visibility better than most.

One of those problems is the circle of misinformation that people get locked into when they are afraid to ask questions.

Another problem Fridley knows well for the transgender community is, again, visibility. Growing up, she said she didn’t see trans people anywhere.

The goal of visibility, she added, is just to show people “how shockingly normal we are.” Normalizing trans culture is something Fridley is passionate about, and she said it would mean a lot to see the university in the town where she grew up fly the transgender flag in honor of the Day of Visibility.

And while Fridley said seeing the flag up would be “undoubtedly meaningful,” she said she would not be surprised if it does not happen.

“You kind of expect to feel disregarded after a while,” Fridley said. “You always get the feeling some guy in a suit thought, ‘This is too likely to alienate somebody because of their religious beliefs... I’m going to shut this down.’”

Belling said they originally wanted to see the transgender flag fly for the entire month of March or even a week but is now doing all they can just to have it up for the day.

To see that flag waving in front of Academic Hall is something that Belling said would bring them to tears.

“I will cry,” Belling said. “And also have this sense of accomplishment because I did it. [I will] just [be] feeling proud of my university because I remember being here as a freshman and first just officially coming out in the early stages of my journey and feeling like there was nowhere for me to go.”

Belling’s educational initiatives and quests like this one are helping make sure students always feel like they have a place to go.