“It feels different this time.”

Southeast freshman Ashley Wagner said those words after attending the March for Our Lives in Saint Louis on March 24. 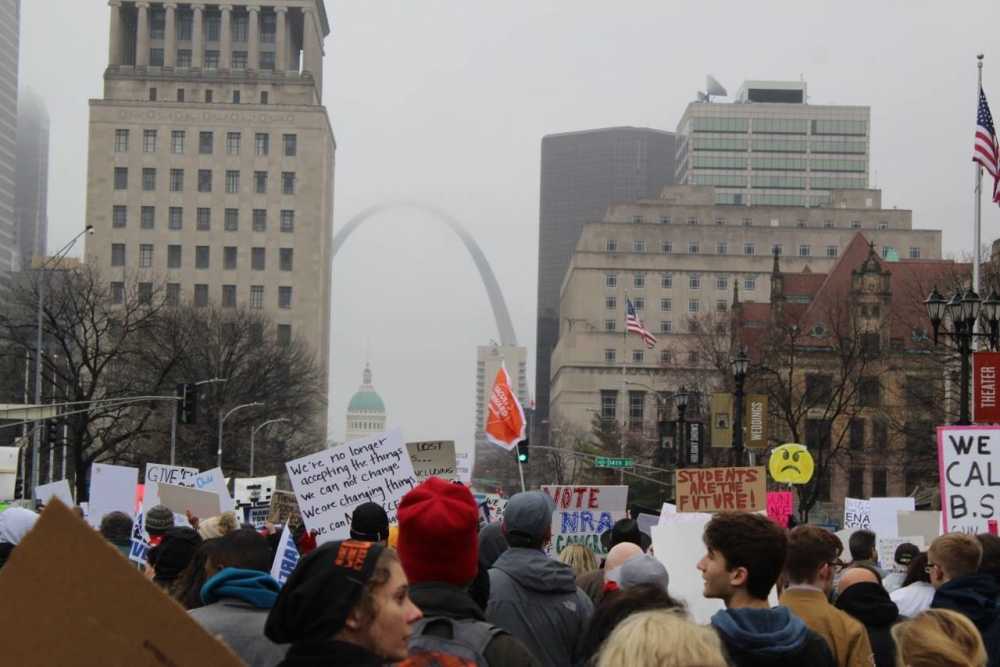 Wagner, an art education major, was one of several Southeast students to attend the march. She’s a member of the Southeast College Democrats and said this was the first peaceful protest she’s participated in.

“It was a little hectic; there were a lot more people there than expected,” Wagner said.

Wagner said the Saint Louis march saw upward of 12,000 participants after only expecting 4,000. It was one of nearly 800 sister marches that took place across the country that day in response to the march in Washington D.C., organized by the survivors of the February shooting at Marjory Stoneman Douglas High School. The student-led demonstration in Washington D.C. was in support of tighter gun laws and demanded action from lawmakers on issues like gun reform, mental health initiatives and school safety.

It was Wagner’s first march, but she wasn’t the only College Democrat who attended the march. Freshman Robert Phillippe also experience marching in a peaceful protest for the first time.

Phillippe, a political science major, said what he saw most at the march were teachers holding signs that spoke out against the idea of arming teachers to reduce casualties in mass shootings.

The idea of arming teachers is one that has arisen after countless shootings have happened in schools across the United States. Many believe teachers could better protect themselves and their students in active-shooter situations if they were armed. 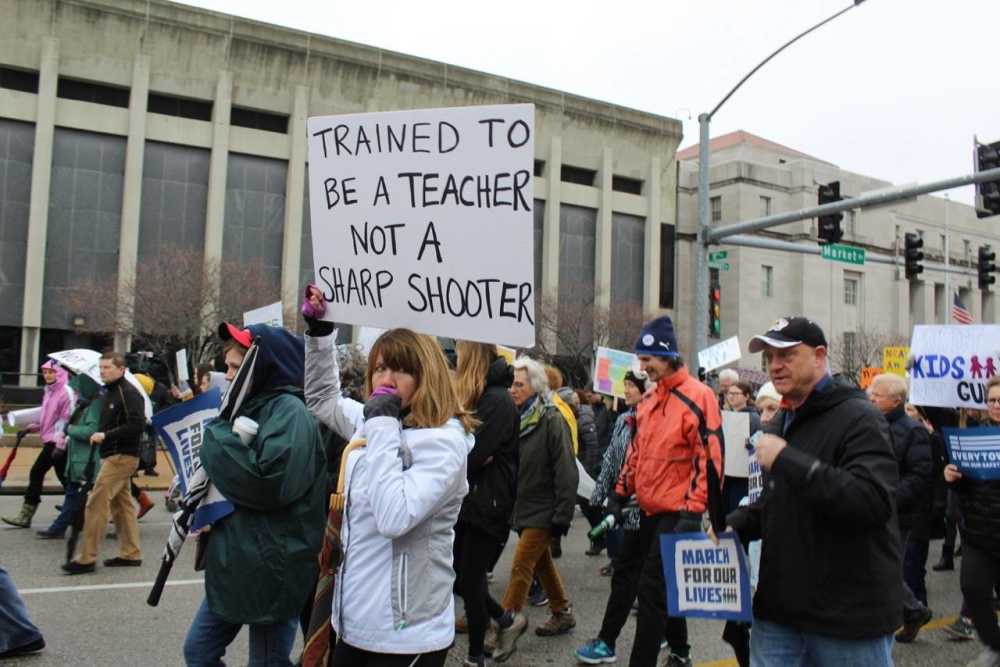 “I feel pretty strongly about it, considering that’s what I want to do with my life; I want to teach,” Wagner said. “I don’t know a lot of teachers that want [to be armed] personally, I don’t know that that’s a responsibility that many want to take. Like, I’d gladly take a bullet for children under my care, but my thing is, I shouldn’t have to.”

Others see the issues brought up at the March for Our Lives differently.

Gavin Sample, a freshman political science major, said many people on the right side of the political spectrum have different opinions about arming teachers.

“I feel like, in the situation, it wouldn’t be like you’re forcing a gun in a teacher’s hand,” Sample said.

He added that there likely would be more extensive training than even normal gun owners have, especially to trust a person in an environment that is typically gun-free.

“It would be a [situation] really where you minimize the amount of accidents and injuries that can occur, and that could really save lives in the end if the unfortunate reality comes that that school is under threat from a school shooting,” Sample said.

Even beyond the specific issue of arming teachers, Sample said he saw the March for Our Lives as a protest primarily focused on one issue.

“I think … a lot of us, more pro gun, pro Second Amendment people, saw it as an anti-gun march,” Sample said. 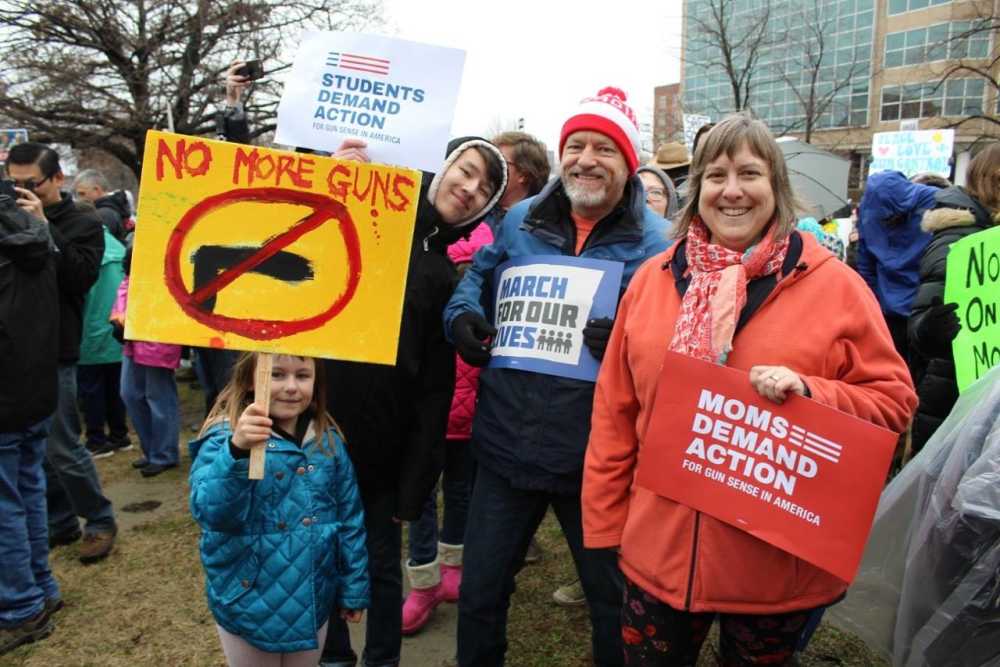 Freshman multimedia journalism major Steve Heine agreed that issues like mental health initiatives and school safety were important and should be addressed, but not in the way they were framed by the March for Our Lives.

“Mental health and school security, those are both really important issues, and I think it’s good that we’re talking about them,” Heine said. “But using that to go into gun reform, that’s not the right way to go about it, because we can put more money into those programs and those initiatives and work to fix those without also trying to go and ban guns.”

Sample said the left side of the political spectrum seems to have a general lack of understanding about firearms, especially when it comes to some of the language used in proposals by celebrities, politicians or lawmakers from the “anti-gun side of the aisle.”

For some, the march was simply about showing support for the families and survivors of the shooting in Parkland.

Phillippe said he went to march in solidarity with the victims of the school shootings such as the ones in Parkland, but he also wanted to send an message to elected officials. 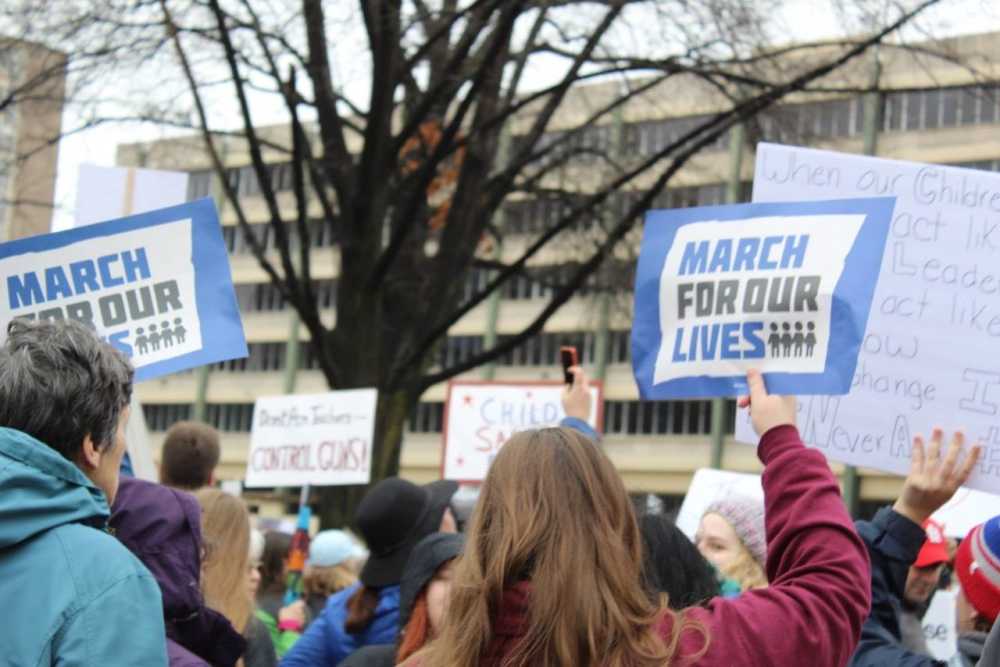 It’s an issue where partisan politics makes it hard to pass legislation. Rights are often seen as part of the issue for both sides, and motives are often misinterpreted.

“I think the problem oftentimes is that people think they’re having one conversation when really there’s two different sides,” Wagner said. “Like people hear ‘gun control’ and they hear ‘gun ban’ instead of just comprehensive, reasonable legislation to fix the problem.”

But some pro-gun supporters have echoed that same feeling of being misunderstood in the conversation surrounding gun laws or gun reform.

“If everybody can kind of know exactly what we’re talking about when we talk about guns, the existing laws, the existing procedures when you go to buy a gun, what’s legal, what’s not, caliber, magazines, clips, what’s the difference between all of those, then we can really get to a good conversation when we all know what we’re talking about. I think that’s really the first step,” Sample said.

Heine said he believes gun reform already has happened in the United States, but there still exists a lack of proper enforcement of those laws.

“Legislation like that to make sure that the laws we have are in place and to refine them to ensure that they work, I think that in the long run is the best solution that we have right now,” freshman Regan Tibbs said.

Both Wagner and Phillippe noted the power of voting and using their voices to create the change they want to see.

“I think the consequential moment will be in November, using our vote, that’s I think when we’re going to see real change,” Phillippe said. “I’m so proud of how active all these students are. It gives me hope that there will be some sort of change down the line.”

Phillippe said he thought something would definitely change after the shooting at Sandy Hook Elementary school in Newtown, Connecticut, in 2012. It didn’t happen. Now, Phillippe noted, students are leading the demonstrations for change.

“It took the students rising above and organizing the march and this great momentum and energy that we’re seeing now,” Phillippe said.

Still, the most divisive part of this issue seems to come down to simple ideology: Do guns kill people or do people kill people?

When confronted with that concept, Phillippe said “the facts” speak for themselves. He compared gun violence in the United States to that of other countries like Australia, Japan, Germany or Britain. 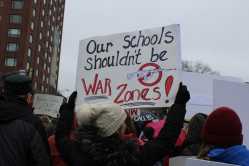 “It comes down to presenting them with the facts and hoping they would make their judgements off that,” Heine said. “But it’s really, it’s a hard thing to change someone’s mind once they have accepted that this is their reality.”

Tibbs said he thinks the best way people who are divided on this issue can come together is through listening to all opinions and agreeing on a solution that is best for everyone, even if some may not agree with it.

“I still believe that we could find a middle ground,” Phillippe said. “There has to be something we can do.”