SGA works on restructuring senate, sets goals for the year 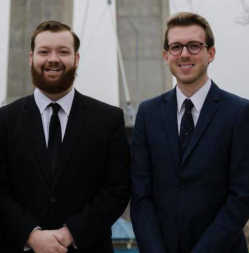 There are many changes to the Student Government Association this year, including a restructuring of senate and leadership.

For the past two school years SGA had the same leaders at the top, with Peyton Mogley and Dylan Kennedy. Both graduated, and Matt Rolwing and Eli Bohnert follows their tenure. Rolwing fills the position as president with Bohnert has vice president.

The pair have plans to change up SGA, however, their first task is reorganizing the senate due to the restructuring of the colleges and schools at Southeast.

“We can't really elect senators under College of Liberal Arts anymore since that's not a real thing,” Bohnert said.

One of the main goals during the reorganization of the senate is to make sure River Campus students are still represented well, Bohnert said.

“I think so often their voices really get lost with what their needs versus the needs on main campus,” he said.

Special elections for open senate positions and first-year senators are open now. Bohnert is in charge of running the special election process.

According the the SGA bylaws, they must have five senators per college, three per school and five first year senators.

“We just need to make sure that throughout [the process] we're not really losing any representation of anything,” Rolwing said. “We should try to gain some representation.”

Everyone elected last year still will have a place on senate, as long as they have not changed their major.

The pair’s goals include being transparent, saving paper and having opening forums.

They feel the organization could work to have the student body be more aware of SGA procedures and actions.

“There's a lot of things that go on within student government and that go along with the university that not a whole lot of people know about,” Rolwing said.

Along with transparency, the pair is hoping to amp up their social media presence.

“Just some ideas we've been throwing around is that the secretary take on a bigger role with managing social media,” Bohnert said.

Another goal is to start limiting their paper use.

“We go through a lot of paper a week,” Rolwing said.

They are looking at how to still get all the information out while using less paper.

They hope to be able to host weekly forums, Rolwing said.

“So, something that we definitely want to do more of this year is actually have, like, more open forums, because if you think back to last year, we had one, and it was toward the end of the school year,” Rolwing said.

There are no set days or time for any of the forums, but Rolwing said he hopes to have a few during common hour.

Rolwing does not believe the change of treasurer will affect any plans or goals they have. Collin Wherenberg, who was elected to the position of treasurer by the student body last spring, has stepped down from the position after not returning to Southeast for the fall semester. Rolwing and Bohnert are hoping for Calab Ellenburg to fill the position. Ellenburg needs to be approved for the position at the first meeting.

“I believe it definitely threw a little bit of a wrench in our plan,” Rolwing said. “So, we're super excited to have Caleb on board, he is definitely one of those voices that will not go unheard.”