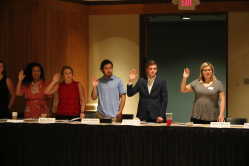 Senators are sworn in after passing a bylaw that restructured the senate.
Photo by Katelyn Mary Skaggs ~ News Editor

The Student Government Association discussed hammocks on campus, approved its first funding request of the year and appointed two new chair positions during the meeting Sept. 24.

A bylaw was passed to structure the student senate around four standing committees and three ad-hoc committees. Another bylaw was passed that changed the composition of the student senate from five elected representatives to six elected representatives for each college. This change was made to reflect the restructuring of Southeast colleges on August 1.

New senators, which included Justin Jacobs as senator of the Harrison College of Business and Computing and Grace Grzywa as a senator of the College of Education, Health and Human Studies and old senators were sworn in after they passed the bylaw that restructured the senate.

Currently there are 12 hammocks on campus. Kaplan said the hammocks originally cost $23, but will now cost $60 to replace any that are damaged.

Junior Katie Meyer expressed her support for the idea of adding hammocks to other parts of campus.

“It would be a good idea to get some more on the Towers and Laferla part of campus,” Meyer said.

Meyer also said more hammocks should be added to the River Campus.

“For those in Laferla who like to be outside, the tables outside don’t do the trick, so hammocks there would be a good idea,” senator Payton Ruddy said.

There were questions about having hammocks outside during bad weather. This led to president Matt Rowling proposing an idea to form an ad-hoc committee for hammocks.

Senior Jessica Lambert requested funding of $600 on behalf of the Print and Sculpture Club to attend a conference for the Mid America Print Council (MAPC).

Lambert said the conference will be an opportunity for students to listen to lectures, exchange portfolios and collaborate with like-minded artists. The resolution was passed through a unanimous vote.