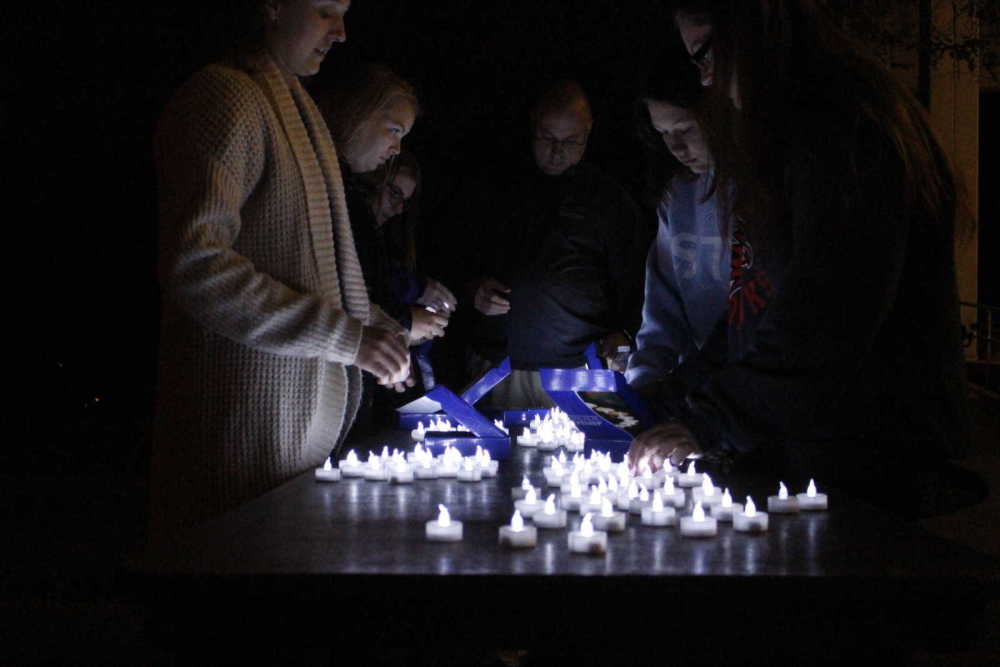 Students gather around a table of candles as they prepare for the Oct. 18 Candlelight Vigil for hazing awareness in front of Kent Library.
Photo by Joshua Dodge ~ Photo Editor

In honor of Timothy Piazza, a former member of Penn State’s Beta Theta Pi fraternity and others who have died through hazing, Southeast held its annual anti-hazing candlelight vigil outside of Kent Library on Thursday Oct. 18.

“There is no group on this campus worth being hazed over,” Associate vice president of Student Life Bruce Skinner said.

According to stophazing.org, more than half of college students involved in clubs, teams and organizations have experienced some form of hazing.

This event was open to all students and faculty to recognize the issue and reflect.

Skinner said his goal is to have students who have witnessed any hazing think to themselves, “I know this is not right, and if I speak up, there will be a lot of people who back me up,” rather than, “I don't want to be the person to say something.’”

At this event students were given a candle to hold in honor of those who have lost their life to hazing. Chosen speakers told a story about about one of those lives.

Kathleen Howard, vice president of chapter development for National Panhellenic Council and one of the speakers said she hopes this candlelight vigil gets people to talk about hazing and learn more about it.

“Coming to the event and hearing about an actual hazing situation where somebody has passed away from it will bring more awareness,” she said.

Junior Maddie Tribl, a member of Delta Delta Delta, said the event made her realize that it really does happen at every university and thinks it is important that we keep raising awareness for it.

Howland said it is not talked about enough; she knows multiple groups who have hazed recently and no one will talk about it because all of the members are OK with it.

“Until somebody speaks up about it, nothing is going to change,” she said.

Skinner said he does not think this topic is talked about enough until something tragic happens, and then it becomes really prominent until other news takes over.

“I speak to a lot of high school students as part of my role and when Greek life is brought up, they think that when they will join a fraternity, band or an athletic team, they will be hazed,” Skinner said.

“The main message I wanted to get out to students is that if you witness hazing happening, you have the obligation to act rather than just hope that somebody else with more authority speaks up,” he said.