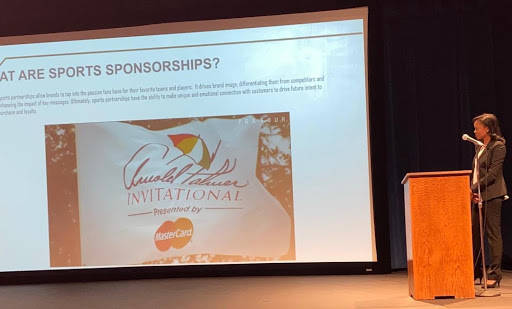 Kyra Joiner spoke on cultural movements in social media and sports marketing and encouraged students to “create your own success” at the 24th annual Michael Davis Lecture at 6 p.m. Feb. 3 in Rose Theatre.

Joiner has 12 years of experience in sports marketing and has worked with corporate sponsorships and national partnerships within the NBA and the WNBA.

She has worked with many celebrities in her career and collaborated with different agencies and non-profit foundations for professional athletes.

Department of Mass Media Professor Tamara Zellars Buck explained why Southeast honors and celebrates Davis each year. Davis, a talented journalism student with whom Buck was classmates, died in a hazing incident on campus. Southeast has an annual lecture in his honor to recognize the kind of career Michael could have had.

“He was recognized for his talent and his ability as a skillful journalist,” Buck said.

She shared some things she learned while studying brand activism. With brand activism,which Joiner said taught her what was important to society.

“Particularly with social media, we were finding a lot of cultural movements via hashtag, and everyone was finding a way to be involved in a movement that was showing what is important to them,” Joiner said.

Joiner left the audience members with some advice to think about for their time in college.

“[I] encourage you to gain as much knowledge as you can while you are here and ask questions, raise your hand,” Joiner said.

It’s important for students to know about industry resources, Joiner said, and be aware of what’s going on within their respective industries.

Southeast junior Kayla Parham attended the Michael Davis lecture for the first time this year and said she came away with a lot of revelation about her future.

“This was my very first Michael Davis lecture, and I really enjoyed it. Being a sports management major, I felt like it was relevant for me in my career path and it gave me a lot of insight on what I want to do,” Parham said.

“She offered a lot of tips for students to get jobs when they are getting ready to leave for college,” Pwitt said.

Southeast hosts a variety of events to inform students about the dangers of hazing, and the Michael Davis Lecture is an annual event to honor his memory and the impact he had on the Mass Media Department.