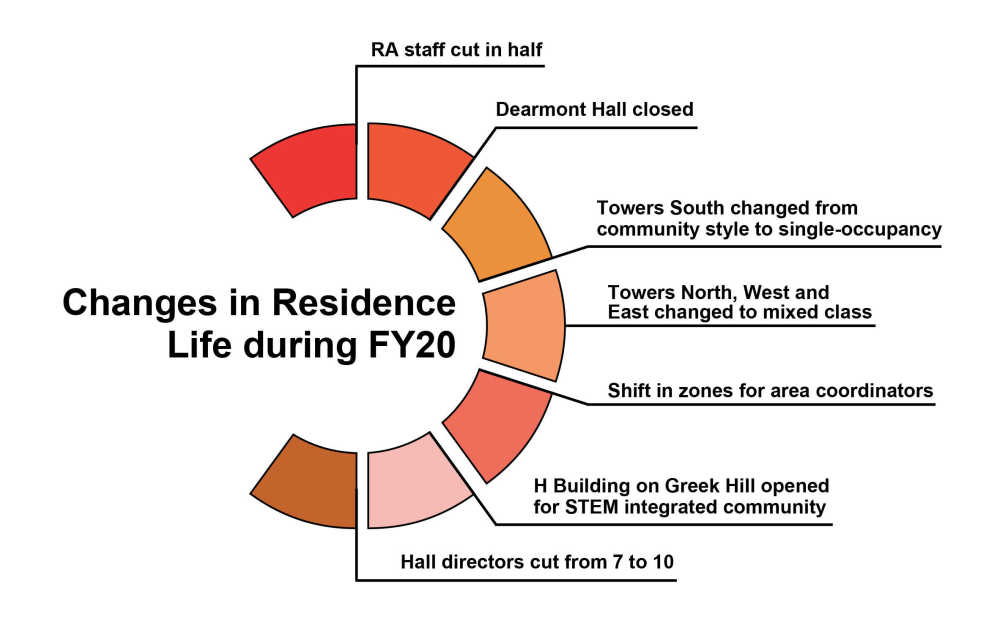 More changes have been made to on-campus living facilities as the Office of Residence Life faces cost-cutting measures due to prolonged declining enrollment.

At the end of the fall semester, Skinner said Residence Life lost three hall directors and decided not to fill those vacant positions.

“What that meant was we’ve now got to start pairing buildings together,” Skinner said. “So we have directors that are managing two buildings, not just one.”

This comes after multiple cost-cutting decisions were made last semester, one of which cut Residence Assistant (RA) staff in half, which requires some to now monitor two floors instead of one.

Other changes made in the fall semester include reduced bed spaces due to the closing of Dearmont Complex and the restructuring of Towers South as a single-occupancy dorm, the consolidation of housing on Greek Hill and the elimination of buildings dedicated to first-year students.

“In addition to reducing the number of RAs that we have [in the fall], we reduced our hall directors staff from ten to seven for this spring semester,” Skinner said.

She said the Office of Residence Life came to this decision by looking at other ways they could cut back on expenses due to the continuous low enrollment trend, without having too much of an effect on residential students.

Skinner said she noticed some of the hall directors were supervising lower-sized buildings in comparison to other peer institutions, so pairing those smaller buildings together under one hall director would keep Southeast on track with other universities.

“Doubling the buildings still allowed us to kind of stay on average with some of those other peer institutions,” Skinner said. “So, there was a lot of conversation about this and the pairings and what buildings made sense to pair together.”

“A few of the directors are kind of trying some different things out because this is going to be our structure moving forward,” Skinner said. “The majority of the hall directors will be running two buildings beginning next fall.”

According to Skinner, two area coordinators had been supervising halls based off the sides of campus — North and South campus. Now, they are looking to align paired buildings under one area coordinator.

Allie Wisker, who was previously the North campus area coordinator, will take over “special interest housing,” such as learning communities or themed housing.

Garrett Downing, previously the South campus area coordinator, will oversee all other buildings on campus in addition to staff selection and training responsibilities.

“This is kind of a slow shift to that beginning this semester, and then that will take full effect beginning next fall for them, as well,” Skinner said.

Despite these changes, Skinner assured they would not result in “a major loss of service to students” because they will still have access to RAs, hall directors and area coordinators.

“There are still support systems within the halls,” Skinner said. “Whether that’s just someone to lend an ear, someone to provide some guidance or share campus resources — we’re all here to help the students with that.”

Skinner added they are evaluating what went well in the fall and plan to continue using those methods this semester. These include mandated floor hours for RAs, who supervise two floors in order to make sure they spent time supervising floors on which they do not live, and organizing “intentional interactions” with individual residents and reporting certain information back to the hall directors.

She said there was also a change in programming this year, and all the RAs seemed to like and appreciate it, especially given some of their new workloads. The RAs are not required to do as much programming because they are putting a new emphasis on less programming and more hall-wide events to offer “quality educational programs.”

“This allows RAs to work more collaboratively with other RAs in their buildings,” Skinner said. “It can increase the quality of some of our educational programming within the halls as well.”

She said Residence Life had some operational and structural struggles they have had to work through, so they are also looking at what may need to be adjusted. Some of these setbacks include fewer people on duty due to reduced staff and buildings, fewer RAs on duty at a time and increased workloads and responsibilities for student workers.

Skinner said the Office of Residence Life will do a similar evaluation again at the end of the spring semester.