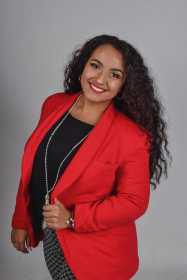 I've been in Student Government since my freshman year and I just noticed that Student Government needed a change in leadership. We've been doing the same thing for so many years, and no one's pushed against the current, and I know that I will do that as a leader, and I think that's what's needed right now.

So currently, throughout our election, we have three major initiatives that we are

wanting to do. We have contactless student IDs that will be on your Apple wallet. And so you just have those on your iPhone and can use them at any facility that you need your ID for.

We wanted to do a new app, because the current SE app isn't really as user-friendly as we'd like it to be. Then the third one, we wanted to be able to use our flex and Redbucks at off-campus restaurants. So just like at local restaurants in the area, just to stimulate the economy and also build that partnership with them.

So to do the meal plans, we'd have to talk to Chartwells and then have those conversations with them and see how they want to do that. Because that's not an idea that hasn't been done before at different universities, so it's 100% doable.

For the new app, we just have to talk to Southeast themself, just like we're doing with the new learning system. We just get a lot of new app developers or somebody and just to see different options out there. Then for the Apple wallet ID, there's only 15 schools in the whole nation that do it, and there's none in Missouri. So I really want us to be the first so I just have to get in contact with Apple and then ID services and just build that partnership.

What do you want the general student body to know about student government?

I want them to know that Student Government is more than just a money pot. Currently the way the Student Government is run is that students just come for us if they want money. But we have so much power to be able to change this university and to make it so much better. So I guess for students to understand our main purpose and why we're here.

So, we have been really pushing on social media. From the beginning, we've been pushing social media, but even more so now. We try to follow everybody, we try to post on Living at Southeast. It is quite difficult to get people to engage online, because no one really is engaged in our elections to begin with, so now trying to get everyone to do it online is quite a challenge.

Oh, 100%. That's like the biggest fear for me right now is that I don't really think that many people are going to vote and it's just because we're not face to face with these students to tell them to vote, we weren't able to reach out to as many students as we would originally like to. So, it's really hard to advertise to so many of our students at Southeast. So I really think the numbers are gonna be very low.

I just want everyone to know that I want to be a part of Student Government in general. I don't have to be in the highest leadership position to be able to make a change. So that's just a big thing for me as well is that I just want to make Southeast better. I came to SEMO wanting to make a change and wanting to leave this place better than I found it, and that's what I plan to do. Regardless if I get president or not, that's always going to be one of my goals.