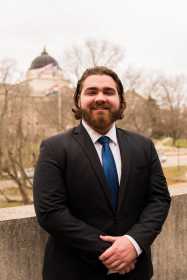 One thing that our ticket really wants to do is we want to change what it means to represent the student body. We want to form more personal relationships with the students and student organizations to find out how to better serve them and really represent what they want rather than what we think is best for the student body. We sent out a survey in the beginning of the month to see how students felt about certain issues around campus and we used those responses to form our initiative. Overall, bettering Student Life is really what we want to do. We want to do as much as we can in the time that we have, if we are elected to better overall student life.

Some of our initiatives that we've proposed so far on our social media, we have posted about increasing inter-campus communication. So increasing awareness about what events are happening at River Campus, main campus and any of the regional campuses are the main priority. The main goal of that is to get better student engagement at events. In our survey, a lot of people said that they simply don't know a lot of the events that happened, whether that be athletics or River Campus.

And then, obviously, much more than that, we want to keep everything up to date. A lot of students said that they've had issues with the SEMO app being outdated or some functions not working. Some things that we want to improve with this webpage is to smooth all that out, get rid of all those issues and give it a more updated look.

Our third one that we wanted to work on was increasing athletic engagement. We really value school pride and athletics is one of the best ways to do that. So we're going to be working on joining up with athletics, doing some giveaways with them, and then continuing to do Student Government sponsored tailgates. Really just doing whatever we can to support the athletes because they are the ones that represent our school, outside of just on campus.

The next thing we wanted to do was work with parking and [the Department of Public Safety] Parking Services, work with them, to see what we could do about the parking situation on campus. I personally serve on the University Affairs Committee for Student Government. So we want to work with DPS Parking Services and the parking liaison to look over that report and see how Student Government can help to smooth out some issues with that.

And then lastly, is our last initiative that we proposed was increasing recycling on campus. The two biggest responses to our survey with the recycling issue was that there's not enough recycling receptacles and people don't know how to recycle it. So those are two things we really want to work on getting more recycling stuff and increasing education about how to recycle.

We want them to know how Student Government can help them, whether that be through their student organizations with funding for any sort of guidance with how we can help them. We fund a lot of leadership conferences and things of that nature. So just giving them a better idea of how we can help an organization. Also we want to form more personal relationships with individual students and get started to start being able to help individual students more instead of just organizations. So we want to expand our network of who exactly we can help instead of just student organization, because that's obviously what we focused on a lot in our senate meeting for funding.

How are you attracting attention to student government elections as a whole?

We've been spreading knowledge about the election on our social media. We've also been contacting some certain departments around campus to read the details there. We've been spreading it that way and then also word of mouth. We're all greek members of the community so we have a lot of connections in the Greek community. There are friends and peers in the Greek community that have other connections that we may not have. So it's just, we've really been focusing on word of mouth.

Yeah, I definitely do. I think that with classes not being in-person it is going to make it a little bit more of a challenge for students to be aware of how to vote. Like I said, our campaign has been trying to spread awareness about how to vote, and when the election is. But with classes not being in session, it's going to be a little bit harder to just get students to actually vote. And that's what we're working on doing, but I do think that it will be impacted a little bit. But honestly, who knows. With everything that's been going on, you never really know what's going to be happening anymore, so we'll see.

I just want students to know that we want to represent them. We want to hear their opinions and we want to be their voice when talking to school officials and talking to the university.

Obviously, it's a little bit hard to do that [right now]. We've been adapting, definitely been talking to university officials around the school, using Zoom and things like that. We've been adapting and we really do want to represent the student body well, and that's why we're doing what we're doing as we're running. And, you know, it's really important to get realistic expectations in terms of what you can do and what you can give to the students and that's what we want to do. We want to be realistic in how we can help them.