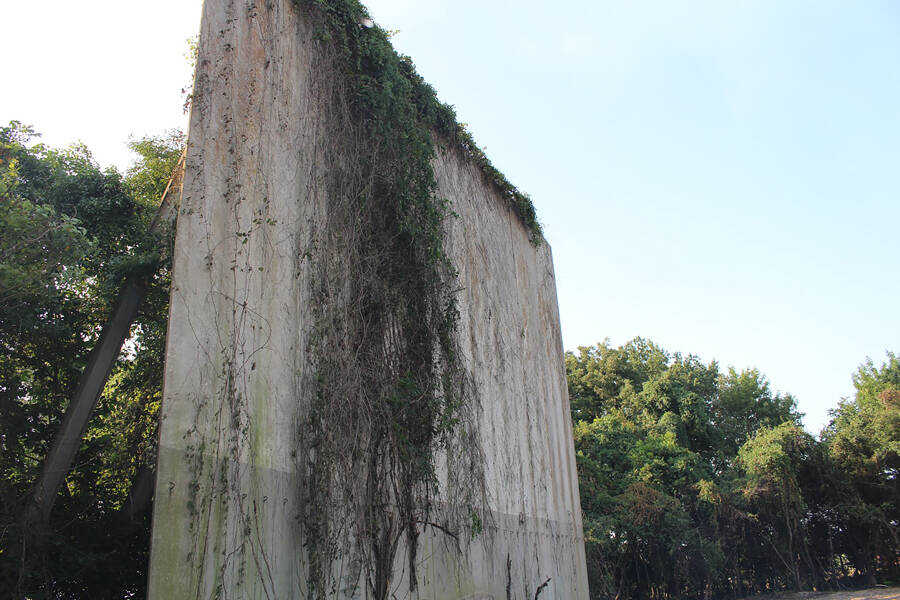 The 50-foot tall movie screen of the Montgomery Drive-In, located in Blomeyer, is unveiled on Friday, Sept. 11 after decades of being covered by overgrowth during this week’s construction by Rock ‘N’ Roll Drive-In. The surrounding area has been cleared of trees in preparations for the drive-in’s opening in mid October.
Photo by Beau Nations

A piece of Southeast Missouri’s cinematic past is getting a facelift.

Rock ‘N’ Roll Drive-In began construction on their upcoming theater earlier this week. That work included removing debris from the old Montgomery Drive-In screen that started operation in the 1950’s.

Rock 'N' Roll Drive-In, located off Highway 25 near Dutchtown, is a short drive from campus and will feature both classic movies and new releases along with live musical performances when it opens.

Co-owner Johnny Tosarello worked in the live music industry before the pandemic and plans to bring that expertise to the drive-in team. He plans to add local and regional musical acts if they can fit concerts into their calendar.

Co-owner Chuck Stratton said he wants the drive-in experience to remain an inviting and affordable experience for everyone. Stratton said they would charge $30 per car for classic movies and $35 for new releases.

“Load your family up. Load your buddies up,” he said. “Invite some friends, sit in the back of your truck and watch a movie.”

Patrons of the drive-in will be able to purchase food and beverages from the drive-in concessions stand and from locally-owned food trucks.

“We’re gonna have some of our own custom cuisine...We’re going to get some custom food trucks in here, like Sugar Chic [Creamery] and Straight Line Swine that we’ve been talking with...That way you’ve got a variety of food,” Tosarello said.

The drive-in theater will feature cinematic technology that a typical movie-goer has not experienced, according to Stratton and Tosarello. They have added a top-of-the-line digital laser projector to give the audience a pristine picture.

The theater is expected to open mid to late October when construction is complete.