Two amendments could mean big changes to the Missouri Constitution 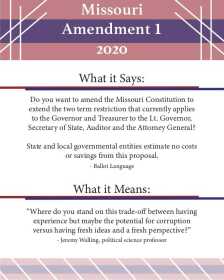 On Nov. 3, Missourians will vote on two amendments to the state Constitution. From changing the process of drawing legislative districts to applying new term limits on statewide offices, these amendments could mean big changes for the Missouri legislature and its constituents. Many voters may have questions as to what these amendments mean and what could be changed.

Missouri currently has term limits on two public offices: the governor and the treasurer may only be elected to office twice, or once if they stepped in to fill the vacancy left by a predecessor less than halfway through their term.

A vote yes for Amendment 1 would extend these limits to other statewide offices including lieutenant governor, auditor, secretary of state and attorney general.

A vote no for Amendment 1 would leave the Missouri constitution unaltered.

“As a political scientist, I tend to have a default mode of thinking that term limits are generally not a good idea,” Associate Professor of Political Science Laura Hatcher said.

Hatcher said political scientists tend to be skeptical of term limits because holding political office is a complicated job. It can take years for a person to learn to do the job well, often more than one term.

“When you have beginners running everything, the lobbyists take over,” Hatcher said.

This belief has proven in many cases to be true, Hatcher said. However, she said those appointed to statewide offices like the ones Amendment 1 proposes to alter are often more prepared.

“Usually people who run for statewide office have held office previously, so their understanding of the job and what it takes can be a little bit different depending on the qualifications of the candidate,” Hatcher said. “On the con side, if you have someone who has not held public office before, or if you have someone who has held a very different kind of public office, then term limits may actually hamper them and cause them to over rely upon a lobbyist to get things done.”

Hatcher said limits on statewide offices would create more competitive elections by removing some of the advantages held by office incumbents, providing the opportunity for more people to run.

Political Science Professor Jeremy Waling said the argument for term limits is to prevent potential for corruption and introduce new voices and perspectives.

“What [supporters of term limits] would say is, ‘Do we want people getting too comfortable and too familiar with the engine of government, the engines of power,’” Walling said.

The opposition argument to term limits, Walling said, is constituents should be able to vote for who they want, and if an incumbent is doing a good job, they shouldn't have to stop.

“What it really comes down to is, ‘Where do you stand on this trade-off between having experience but maybe the potential for corruption versus having fresh ideas and a fresh perspective?’ I wouldn't argue that one is more right than the other,” Walling said. 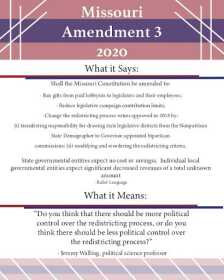 In 2018, 62% of Missouri voters approved the “Clean Missouri” initiative, which handed control over the drawing of district lines to a nonpartisan state demographer. A demographer specializes in the study of the statistics of human populations.

Walling said the initiative gained traction among voters as a move against gerrymandering and to remove political influence in the process of drawing voting district lines.

Amendment 3 aims to give the power to draw district lines back to a bipartisan commission appointed by the governor, undoing what Walling called an “overwhelmingly supported” decision Missourians made only two years ago.

The 2018 decision created the position of nonpartisan state demographer and the process of hiring one to redraw the legislative districts. Applications were accepted from Sept. 5 to Dec. 4, 2019, and should have been narrowed to at least three applicants by the state auditor and presented to the majority and minority leaders of the Senate for review.

Senate Minority Leader John Rizzo announced in May the hiring process had been put on pause until after Missouri voters have decided either to support or deny Amendment 3.

Legislative redistricting occurs once every 10 years, aligning with the collection of census data. 2020 is a census year, meaning Missouri never had a redistricting process with a state demographer.

“If you are a demographer, you have some training and skills in understanding population distributions. Whereas, if I’m on this commission, I could just be some Joe Blow that has political connections to the person who appointed me,” Walling said. “So the nonpartisan demographer feels like there might be some qualifications or expertise there that the commission may not necessarily have.”

Amendment 3 has become firmly divided on party lines, being largely supported by conservative groups and opposed by progressives. As data from the 2020 census is coming in, Walling said state representatives are trying to decide if they want to take back control over the process or allow the demographer to draw the districts.

The language of Amendment 3, Laura Hatcher said, is structured to hide the largest changes. The amendment starts by banning lobbyist gifts regardless of value — lobbyists are currently banned from giving legislators gifts valued above five dollars. The next point on the amendment lowers campaign contribution limits by $100, from $2,500 to $2,400. The last point on the amendment restructures the way Missouri draws the lines of legislative districts, recreates a commission the state voted out of existence less than two years ago and eliminates the position of state demographer before anyone is hired.

“Missourians don’t like lobbyists, and they don't like lobbyists’ gifts,” Hatcher said. “So part of the reason that is there at the top is to attract people who are like, ‘No, we don't want lobbyists to give gifts’ without necessarily reading all the way through the amendment and seeing what else is there.”