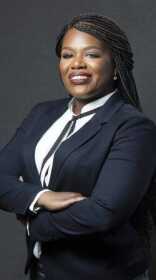 Image of Cori Bush from coribush.org

Change has come to the House of Representatives with the election of Democratic candidate Cori Bush. She defeated Representative William “Lacy” Clay, who held the seat since 2001.

She will be the first Black woman to hold the seat for Missouri's first congressional district. It’s not only a win for the spirit of diversity but also for women’s equality.

Bush expressed an interest in politics after seeing injustice against the Black community. She took to Twitter after her victory to express more thoughts on this subject.

“Today, we take this fight for black lives from the streets of Ferguson to the halls of Congress,” Bush said.

Jasmine D. Evans, a Southeast mass communication alumna, spoke about why she thought Bush would be an impactful congresswoman.

“Cori is a great leader — she’s very reachable and accessible to the community,” Evans said.

Another alumna, Bex Carlos, said she saw firsthand how Bush is a strong and enduring person.

“I started to get more active in the protests amidst the Kavanaugh hearings," Carlos said. "My first night at the protests, I met [Bush]. She was staying there overnight in shifts. I talked with her, saw how humble she was and wanted to see change in her city.”

Bush earned a degree in nursing when she went to the Lutheran School of Nursing in St. Louis. She is also a single mother and a member of the Democratic Socialists of America.

The death of Michael Brown sparked a drive in her for change in 2014. She ran for Senate in 2016 and tried again in 2018 for the House, where she fell to Clay.

The death of George Floyd this year put more emphasis on the Black Lives Matter movement, pushing the public into a state of awareness. Bush was on the frontlines protesting against police brutality.

At the end of the Twitter thread about her victory, Bush gave a closing statement.

“To all the counted outs, the forgotten abouts, the marginalized and the pushed asides. This is our moment. We came together to end a 52-year family dynasty. That’s how we build the political revolution,” Bush stated.