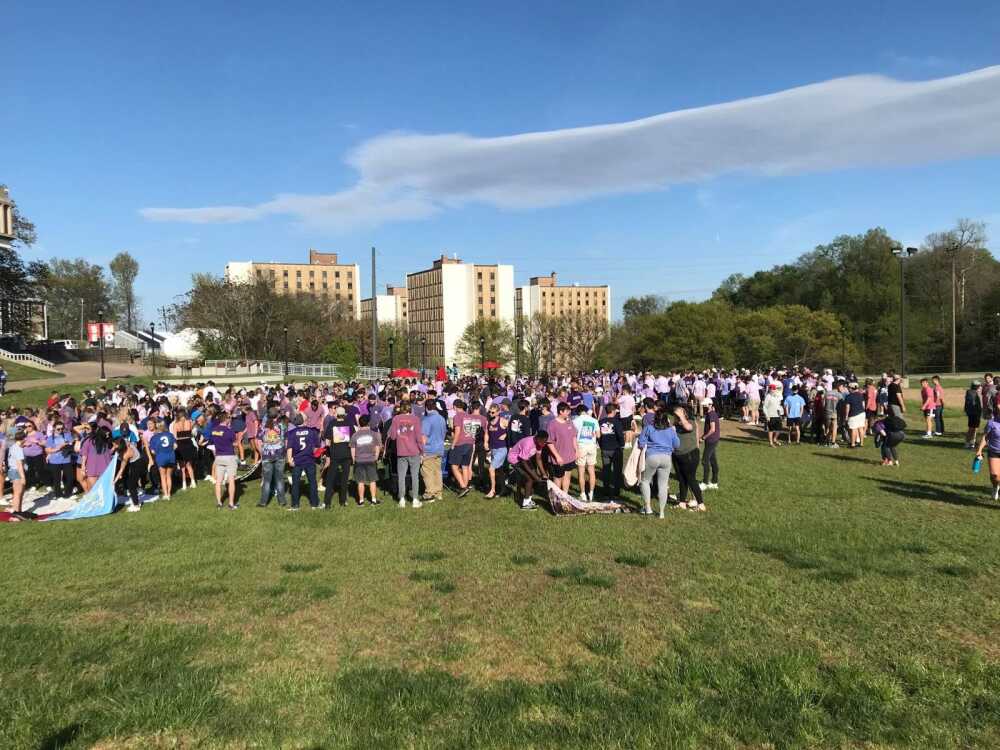 Students gather at Parker Field following the Walk A Mile Event on April 14. The event is a chance for students who have faced or oppose sexual assault to walk with one another and share their experiences.
Photo by Leon Miller Jr.

Students participating in the walk were given the opportunity to wear red heels to symbolize the sexual harassment faced theirselves and by others to show their solidarity with survivors.

The walk began at Academic Hall and ended at Parker Field. There, students in attendance were given a chance to speak openly about the experiences they've had combatting sexual assault. The conversation was led by Redhawks Rising President Celeste Akoro.

"I wasn't expecting this many people … it was a really great turnout," Akoro said. "I love how everybody came to listen, because nobody's story is worthless."

In addition to Akoro, the organization's vice-president, Haley Hawkins, and alum Jessica Strunk were in attendance to talk about the importance of their organization and why its future events are important for the rest of campus.

"I’ve been feeling really unempowered, I’ve been silencing myself, and I didn’t want to be the good victim anymore,” Hawkins said. “I figure if my story and my efforts could somehow help someone, then it’s worth doing.”

Strunk said she believes Redhawks Rising has increased its participation and development since it was founded in 2016.

“I think that we’re more welcomed, and we’ve seen more people coming out; everyone else feels more comfortable being able to share their own stories when they listen to us,” she said.

The Campus Violence Prevention Program's upcoming event “SEMO Rising!” will take place April 22 at 7 p.m. at the Academic Terraces. The event gives survivors and allies the opportunity to join one another and have in-depth conversations about their experiences expressed in a way of their choosing in an open-mic setting.