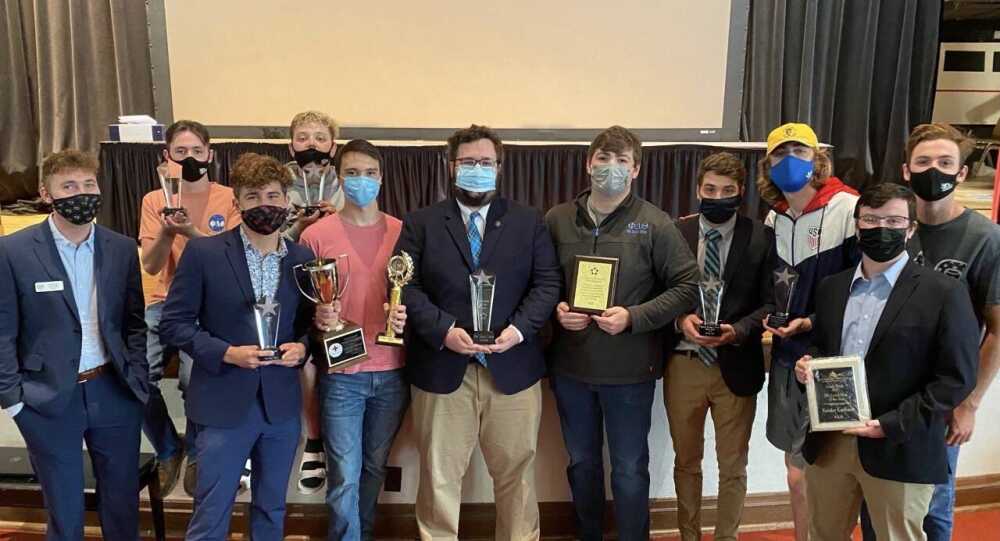 Phi Delta Theta members after being named the Fraternity of the Year at the award ceremony on April 18th. In the center is Alex Younkins holding the award.
Photo submitted by Alex Younkins

Greek Life honored Phi Delta Theta and Tri Delta April 18, during the All-Greek Formal at the end of Greek Week. Winners, including chapter presidents, had no prior knowledge they would win the award before being named Fraternity or Sorority of the Year. During the 2020 term when the points were counted, secondary education senior Alex Younkins was the president of Phi Delta Theta, and Allie Hammack was the president of Tri Delta.

Younkins said winners of the Fraternity and Sorority of the Year are determined by reports that chapter presidents turn in.

“SEMO does a Five Star packet every year,” Younkins said. “They award Fraternity of the Year in spring, but we collect the data from the events we had done in the previous year. We elect the executive board on a calendar year basis, so I was president from January of 2020 to December of 2020.”

The Five Star packet is a report presidents of each chapter fill out to submit data about what their chapter did during the year. This includes academic success, chapter management, and community engagement. This way, the Five Star Chapter Program can tally points and name the winners each year. Younkins is no longer a member of the executive board, but continues to be a member of Phi Delta Theta. The president for the 2021 year is Sam Wright, an entrepreneurial studies junior.

Psychology major sophomore Kaitlyn Pickett is the current president of Tri Delta. While she was not president during the winning term, she said she was relieved their hard work paid off and felt very deserving of winning. Pickett said Tri Delta members should be those who want to improve themselves.

“We try to seek out women who are going to fit in well,” Pickett said. “We have three words that help describe us. Those words are brave, bold and kind. We try to find women who want to grow as leaders and grow as women.”

Pickett has been president of Tri Delta since November 2020.

Political science junior Abbey Hammack is currently the Tri Delta vice president of chapter programming and development. While she said it was a bit difficult when the pandemic first hit Southeast, Hammack said the main focus for Tri Delta was to make sure to help their members out when needed.

“Obviously, it was a big adjustment for us,” Hammack said. “We couldn’t hold chapter meetings because we didn’t want to stress people out. We did check in on each other a lot — we had mental health check-ins, and we had tutors to help students with online work.”

Hammack was involved in helping write the Five Star Report.

For students interested in joining Phi Delta Theta, Tri Delta or any other Greek chapters at Southeast, recruitment takes place between Aug. 23-29. While students must be at least sophomores to live at the chapter dorms, students of any year may attempt to join the fraternity or sorority of their choice.