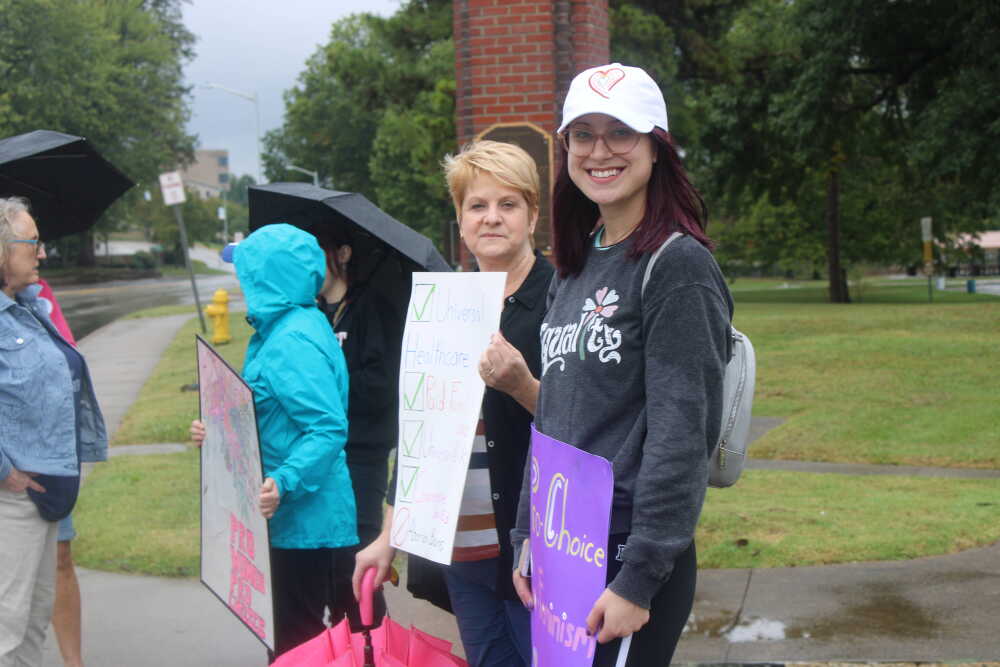 Alum Abby Van Winkle and her mother Donna Van Winkle hold up their signs for the women's march.
Photo by Alyssa Lunsford

Following a small turnout at last year's event, not even the pouring rain could keep activists away from the Cape Girardeau’s Women March on Saturday.

The Cape Girardeau Women’s March took place Oct. 2 at 10 a.m. near Freedom Corner on Broadway Street. Women and allies came from throughout Southeast Missouri to stand in solidarity with one another, hoping to spread the word about women's reproductive rights, bodily autonomy and other related topics.

Women’s marches were not limited to just Cape Girardeau however, with many other marches taking place all across the country. These events were established as a preliminary measure to the Supreme Court meeting Oct. 4 that will be covering women’s reproductive rights.

Political organizer Paloma Scarpaci helped start the march in Cape Girardeau. After contacting the city for permission to hold the event, Scarpaci set up a Facebook page and registration website to spread the word and help people RSVP.

“There's not a lot of support or education about what the Women's March is, or even just about women's reproductive health, so I think it’s just truly important to have something, even just once a year, that gathers like-minded people,” Scarpaci said.

Scarpaci enlisted the help of two organizations, Safe House of Southeast Missouri and Democratic Socialists of America (DSA) Cape. Both organizations had tents at the event and helped further their message of protecting women’s rights to make choices about their bodies.

The Safe House has an undisclosed location to house men, women and children who face forms of abuse, whether it be physical, emotional or substance abuse.

Dakota Hamlin, representative of Safe House, helps educate others on the benefits a safe house can provide to those in need.

“In-shelter, everything is completely free, including food, clothing vouchers, hygiene products, baby products — anything you could really need for daily living, even counseling,” Hamlin said.

They also have a thrift store where donations can be delivered, located at 230 N. Spring St. in Cape Girardeau. All purchases made within the Safe House thrift store go directly toward funding the organization.

Outside of organizational work, people attended the march to show their support for women. Many had ties to furthering the right for women to make choices about their own bodies when Roe vs. Wade, a bill that legalized abortion and helped to protect women’s right to abortions, was first passed in 1973.

Additionally, as legislators in Texas recently banned abortions taking place six weeks after a person’s last menstrual period, many people at the march said they were worried about a possible overturning of Roe vs. Wade in the future.

Janet Smith of Cape Girardeau spoke of her memories of the time when Roe vs. Wade was first passed. She said she knew many women who faced unwanted pregnancies even after the bill was passed due to a lack of safe and available reproductive services nearby.

“You can pass laws to make abortion not legal, which makes it unsafe. All you are doing is making it more dangerous for women — you aren’t stopping abortion,” Smith said.

SEMO alumni Emily Choka said she personally feels what is happening in Texas is very dangerous for all women. She wants more people, especially in Cape, to understand and challenge what is happening.

“It’s very easy for the people in this area to not understand big issues like this, so it’s very necessary for an issue like this to be spread around, even if the Texas laws aren’t happening here,” Choka said.

Pamela Leighton of Cape Girardeau said women can make a difference when it comes to women's rights by being vocal.

“The only way to make change is to stand up and let your voices be heard,” Leighton said.