After years of classes in Serena and River Campus, the Southeast painting and ceramics programs were gifted two new buildings for student classes. The buildings are located at the corner of Morgan Oak and Frederick Street, near SEMO’s River Campus. The project has been in the works for almost three years and will officially be ready for student and faculty use during the Spring 2022 semester.

Southeast ceramics professor Benjie Heu said both faculty and students will like the new buildings for similar reasons.

“It’s a brand-new house; it’s beautiful. Lots of space — it’s got all of the great safety features, room for expansion. It will be great for the students,” Heu said. “It’s going to feel much more official. It won’t feel temporary. It’s a real place that we will be at forever, so it feels good.”

Chief developers of the new arts buildings Lisa and Scott Blank said discussion about an expansion of the arts program has been circulating since early 2019. The Blanks partnered with the architectural firm Lawrence Group to design the buildings.

“We got the input from all of the professors in the arts department that would be using these buildings in that process to see where their needs were, their wants, and work that into the development,” Lisa Blank said.

With design aspects aside, the Blanks also wanted to ensure each building would provide the department with quality service.

“It was important to us that the buildings be functional, that they not just be designed to win awards but that they were actually functional for the applications here,” Scott Blank said.

Though these buildings are new, the Blanks incorporated the history of Southeast into the building, as well as some of their own family history.

Much of the unused materials from Academic were put into storage, which led to brainstorming about how past materials could be repurposed for this new project. The new ceramics building includes old doors that were salvaged from a previous Academic Hall project.

“We started having discussions about how we could reuse existing material into this project, and then symbolically connect the River Campus to the main campus through this project,” Scott Blank said. “One of the ideas that surfaced was reusing the doors of Academic. We had a craftsman refinish those for us, and we put them in the entryway to the gallery area.”

The Blanks also incorporated wood from their family farm’s barn doors into a main wall in the ceramics building, in which the wood is lined from floor to ceiling.

“As part of the funding to do this project, we sold a portion of the farm we inherited when Scott’s dad passed away,” Lisa Blank said. “Scott’s dad had purchased this farm back four years ago or so and spent a lot of time on that farm. It was one of his favorite places to go. It meant a lot to him, and as a result, meant a lot to us. He means the world to us.”

Scott Blank hopes as things progress, they will be able to use more materials and repurpose them to use on future projects, as well.

More information about the Southeast Art + Design Department can be found on the university’s website. 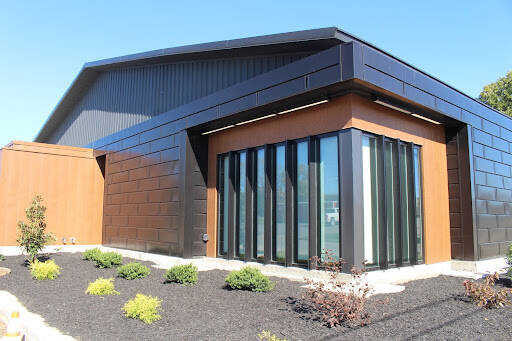 A side view of the new ceramics facility located at the corner of Morgan Oak and Frederick Street. These buildings are expected to open during the Spring 2022 semester for painting and ceramics classes.
Photo by Arielle Adams