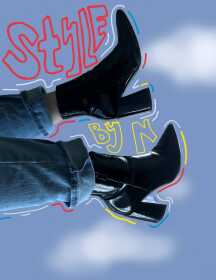 If you’ve been looking for a way to raise eyebrows at Thanksgiving dinner, this one's for you.

While tattoos used to be ~totes~ taboo, they’ve moved into the mainstream in the past few years. Teeny tiny tattoos — often smaller than a quarter — are the perfect way to dip your toes in the tattoo pool.

This specific style of permanent art can be found on celebs like Miley Cyrus, Ariana Grande and Rihanna. Any “tiny tattoo” search on Pinterest yields endless scrolls of results — from teeny trees to cute lil hearts, this trend has a lot of versatility. They’re considered an expression of your personal style and are featured allllllll over the fashion world!

When you’re choosing a design, be sure to follow a few basic rules! Don’t ask for a tribal tattoo if you aren’t part of that community. Read up on cultural appropriation, and act accordingly! Also, if you’re considering a design in another language, plz give it lotssssss of thought. Remember when Ariana Grande accidentally got “Japanese BBQ” tattooed instead of “7 Rings” in Japanese? Uh, yeah! And, cultural appropriation, too.

Also, it’s a common rule to neverrrrr copy another tattoo artist’s work! So, unless it’s a super simple design, don’t bring inspo pics from another artist to your appointment.

Choosing a small size can be practical. Tiny tats are super easy to cover up in the workplace if your employer doesn’t allow visible tattoos. Say it with me: girlboss!

It’s totally normal to feel a little scared of the pain with tats, but sessions for smaller tattoos are shorter and more manageable. Alsoooooo, you can always take an over-the-counter pain reliever before your appointment! Just make sure it isn’t one that increases bleeding, like aspirin. That’s a big no-no!

The downside of teeny tattoos, though? Experts say they’re quicker to fade and bleed over time. Since tats are a permanent addition to your body, this is something you’ll probablyyyyyy want to consider.

Do I have any tiny tattoos? Now that’s one secret I’ll never tell. (: