Cuffing season: It’s what you make it. 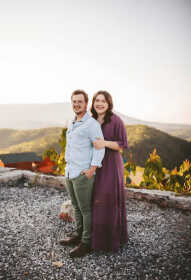 Baili Diefenbach and her boyfriend, who met on Tinder. They have been dating for about eight months.
Photo by Maggie Duncan

It was February 14, 2021. I woke up in bed with an acquaintance of mine, not particularly wanting to be there anymore. As I got back to my room, a palpable weight lifting off my chest, I reflected on the fact I spent my first single Valentine’s day since I was 15 with someone for whom I cared for and knew so little about that my favorite part of the whole experience was leaving.

Shortly after, I vowed to myself this was the end of my short-lived flings. I would take things slow. If I was going to be cuffed, it had to be for real.

What is “cuffing season?”

According to Merriam-Webster, “It’s the time of the year when the weather starts to turn cold, and single people begin the active search for romantic partners in the hope of having someone with whom to ride out the colder, snowier, bleaker months.”

In 2021, “cuffing” someone is easier than ever, with dating apps that allow you to access a plethora of potential partners in your area with just a few taps--but it’s rarely that straightforward.

In my own experience, after being in a relationship for almost two years, I was eager to get back out there and have fun, go on dates and do whatever I wanted to with no strings attached. But there were several things I — along with many others who use online dating apps — didn’t think through: What was I looking for? Was I communicating my wants and needs with my dates? And would these connections actually last?

Dr. Sarah Kuborn, assistant professor in the department of child and family studies, has several theories as to why people look harder for relationships during the holiday season.

Different chemicals such as testosterone, dopamine and serotonin can fluctuate with the seasons, so people may seek out relationships to increase those chemicals and make them feel good, Kuborn said. Societal expectations also play a big role, and many might look for a mate to avoid an awkward conversation with family about why they are single. Another theory: media influence.

“TV romanticizes relationships over the holidays, and it makes you want it, too,” Kuborn said.

I’ve never been a Hallmark Christmas movie type of person, but I definitely see the appeal. When I watched “To All the Boys I’ve Loved Before” in 2018, it made me pine even harder for the guy I had a crush on at the time, to the point I wrote him an unsent love letter of my own.

Kuborn emphasized the importance of self-reflection and understanding why you’re looking for someone else.

“Really dig deep into yourself. Is this just because I’ve been so trained to romanticize the holidays and where I need somebody, and am I OK with that? Is it because I feel pressure from my family?” Kuborn said. “Having an honest conversation with [your family] will actually benefit you more in the long-run than bringing home a new person during the holiday season.”

Personally, online dating is somewhat tricky. It feels like a game to my brain: How many times do I have to swipe before I match with someone and get a little dopamine hit? That, along with very recently starting to unpack where I get my value from and realizing I don’t need to rely on others’ validation and compliments about my appearance, makes for a lot of thinking I should have done about my intentions before I started swiping.

Madison Lynn, senior special education major, said it is much easier to make the first move online, especially when someone has already swiped on you to show they’re interested.

“It takes away any nerves of putting yourself out there or making the first move if it’s just behind a screen,” Lynn said. “And then if you get rejected, you get rejected — I’ve never met you, my feelings aren’t invested yet.”

Lynn enjoys how easy and casual it can be to find someone to go on dates with, especially during the fall and winter months.

“It’s a good chance to put yourself out there,” Lynn said. “And then if you’re not feeling it, you don’t have to pursue it or go on a date with that person.”

Lynn emphasized the importance of being safe and looking out for potential “weirdos”. She has a personal rule to wait 10 days before she meets someone from a dating site in person, so she has time to spot any major red flags.

“Just kind of really, really feel it out. Make sure that you’re going to be safe whenever you’re going to meet this person, and always meet in a public place,” Lynn said.

It’s also a good idea to have a few additional safety precautions in place when you’re getting to know someone new, like always letting another person know what your plans are and who you’ll be with, as well as sharing your location with someone you trust. It’s also important to not share your number and address with your date until you’re sure you feel safe with them, and Facetime with them or check out their social media to make sure they are who they say they are and that the vibes aren’t off. It’s also crucial to have a conversation about getting tested for sexually transmitted diseases and using protection before doing anything intimate.

A “cuffing” necessity: Be clear about what you’re looking for.

Baili Diefenbach initially had a hard time standing up for what she wanted in a Tinder match.

“I think to try to fit in with the hookup culture, I was saying I had no expectations and trying to tell myself that, but in all honesty, I was like, ‘I hope this goes somewhere, I hope we form a connection,’” Diefenbach said. “But I think I finally admitted that to myself three, four months into being on Tinder.”

Diefenbach said admitting to herself she was looking for something more serious made her much more intentional about how she swiped and interacted with her matches. When she matched with her now-boyfriend and he gave her his number — as opposed to most guys who kept talking on the app or on Snapchat — she knew there was something special about him.

“Right off the bat, we were having discussions about what we wanted,” Diefenbach said. “We both wanted something serious; we were committed to each other.”

Shortly after, Diefenbach decided to delete her dating apps.

“We hadn’t even met yet, but I was like, ‘I think we’re in it for the long haul,’” Diefenbach said.

In the months I was single, I casually went out with quite a few people, but I didn’t really click with any of them. One of my more memorable flings was with someone I’d matched with mere hours before we first met. We went on quite a few dates, and at one point, I showed him the song “Echoes” by Pink Floyd: a 24-minute masterpiece and one of my all-time favorite songs.

It was such a bizarre feeling: Me and this guy whom I didn’t even know existed a few days ago, sitting in a car and experiencing something so personal and close to my heart, together. It was an extremely intimate moment that somehow lacked any real intimacy.

A little more than a week into seeing him, I started to realize I didn’t really like him that much. We had some in common, but not a lot, and we didn’t have that much actual chemistry. We were both just single and looking for someone — anyone — to fill the relationship-shaped hole in our hearts.

Merriam-Webster’s description of cuffing season concludes with this.

“Typically, those months run from October through March — though as always with such things, your mileage may vary — but the season is generally regarded as culminating with Valentine’s Day.”

Shortly after my Valentine’s Day misadventure, I decided I wanted to spend time actually getting to know my dates before doing anything physical with them. So I made the first move and asked the next person I matched with on a lunch date: a pretty unprecedented move for me.

We’ve been in a relationship for more than six months now. On our first date, we talked for hours, and I learned that I actually really, really liked them. Neither of us were looking for anything serious at the time, but we were on the same page with our expectations, and things worked out better than I could’ve ever expected.

I don’t have a silver bullet for finding a special someone as the weather gets colder and cuddling up under a blanket with someone else sounds more and more appealing. For me, it’s important to remember you aren’t going to click with everyone — or even most of the people — you match with, but as long as you take time to reflect on your intentions and are upfront with your partner, you’re ready to get “cuffed.”