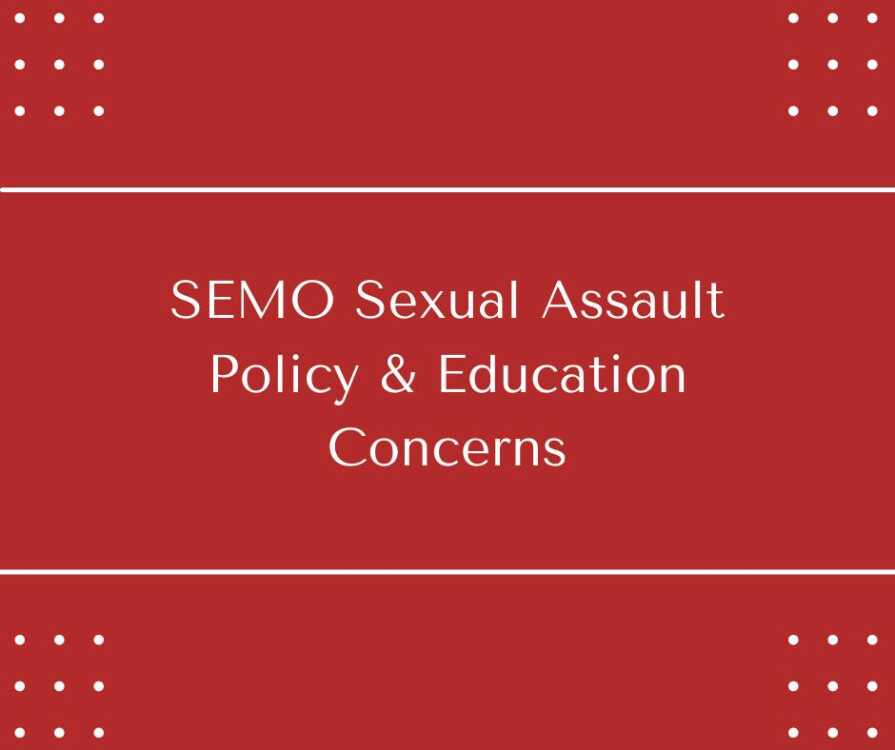 One year ago, SEMO student Lea Brady went public with her story of sexual assault on Facebook. Her Dec. 10 post seemed to resonate with the student body and ignited concerns with the way the university handles cases of sexual assault and misconduct. Today, students continue to voice their frustrations on social media, most recently in a documentary named “Hold SEMO Accountable,” the same name as a 2020 petition created by student Kelsy Carrington.

The 22-minute documentary, created by photography major Alona Jenkins, was uploaded to Youtube Nov. 9, 2021. Jenkins created the documentary to bring awareness to sexual assault on campus and advocate for further action from school officials. The video cuts between results from a survey administered by Jenkins and three interviews, two from anonymous sources and one from current Redhawks Rising President Sophia Davis. The student organization Redhawks Rising was founded in 2016 to support survivors of sexual assault, raise awareness and provide educational opportunities on the issue to the student body.

“A sexual misconduct situation might happen, and then it gets a lot of attention,” Davis said. “Maybe for a couple weeks people are outraged, and they might start petitions or there will be a big social media movement and a couple emails from administration, but then nothing really changes, and it happens again. It’s a vicious cycle.”

Concerns with reporting and hearing process

In an interview with the Arrow, Brady said she originally filed a sexual assault report against a male athlete in October 2020, and the University issued a Letter of No Contact, a document similar to a restraining order, before opening a campus investigation. Two months later, she posted in the Living at Southeast Facebook group because she was frustrated the athlete remained on campus and continued to attend practices.

One day after her post, she received an email from the Office of Student Conduct telling her referring to the man on social media violated the Letter of No Contact.

Brady’s complaint ultimately was resolved in her favor, which included dismissing the student from the university, issuing a no-trespass order and imposing a $50 judicial fine. By this time, Brady said the accused had already transferred to another school.

Brady’s Facebook post inspired one of the anonymous sources in the documentary to go public with her story of sexual assault on social media. The anonymous source told the Arrow the accused in her case was also an athlete, and by going public, she wanted to “show that it’s a frequent thing happening.”

During the investigation and hearing, the anonymous source said she was also frustrated the accused was allowed to continue attending athletics practices.

In regards to this issue, dean of students Trae Mitten explained when a student is accused, the university cannot prohibit the individual from participating in school sports or organizations because they are required by federal law to protect the rights of both reporting and accused students.

“As a person, I completely understand that can be very frustrating,” Mitten said. “[This is] not institutional policy; it is literally what the law says.”

“I was anxious. I didn’t want to go to class. I was debating dropping out of school,” Jenkins said. “I was very much still harassed by this person. I’d walk outside class, and he’d be waiting for me to leave outside the hallway. He definitely did talk to me.”

In regards to the Letter of No Contact, Mitten said the university cannot remove individuals from class until the investigation and resolution process is complete because they cannot impose sanctions until an individual is found in violation of university policy. In regards to breaking the Letter of No Contact, this is a violation of policy and appropriate sanctions will be placed depending on the given case.

After the resolution process is complete and a student has been found in violation, the university can remove individuals from class as a sanction depending on the case. When students must be in the same class, Mitten said the Letter of No Contact stays in place, but students will be placed on separate sides of the room, and faculty members may be notified.

Concerns with execution of the Letter of No Contact are not new. In 2017, Kyleigh Williamsom told the Arrow in the story “Process: Complexities arise with adjudicating assault” that a Letter of No Contact and campus investigation did not prevent her accused and his wife from messaging her and posting flyers about her across campus to discourage her from moving forward with her complaint.

If a Letter of No Contact is broken, Mitten said the individual should report the violations, and appropriate sanctions will be enforced. In a case of physical violence, Mitten said he has personally assisted students in getting ex-parte orders through the court system.

“We do have a good success rate with our no-contact orders,” Mitten said. “It’s obviously not 100%, ‘cause we can never control what any person chooses to do.”

Concerns with education on consent and sexual misconduct

Toward the end of the documentary, two anonymous sources and Redhawks Rising president Sophia Davis raise the issue of needing comprehensive sexual violence and misconduct education.

Currently, incoming students are required to pass online modules covering alcohol, drugs and sexual violence through My Student Body before their first semester at SEMO begins. Davis said many students blow through the modules, get the score they need and forget about it. She believes the modules should be changed to an annual requirement.

“What I think should be required from every student and faculty member is an updated, comprehensive module presentation. [It should be] something that everyone has to complete and get a perfect score on,” Davis said.

Besides My Student Body, other required education concerning sexual misconduct and consent appears in UI100. Students are required to view a presentation on sexual violence prevention and take an associated 10-question quiz with a 60% pass rate, as stated in the UI100 Faculty Resource Manual, updated Spring 2018.

“[With the change of UI100 to one-credit hour], we lost a significant amount of time when we could impactfully talk to students about these issues. In the absence of that, we have to identify new ways to address that,” Mitten said. “We are at this point re-evaluating and looking to re-establish all of our education programming.”

In March of 2021, Davis told the Arrow the Department of Public Safety gave a new presentation on sexual conduct to her sorority Tri Sigma. She said she felt the presentation was “misguided and not helpful.”

Mitten said he felt there was some miscommunication that day, and the presentation could have been delivered in a more “soft-edged” way.

Last year, students were frustrated with examples of nonverbal consent presented in a campus violence prevention PowerPoint and began circulating screenshots of the slide on social media. In the presentation, the example of nonverbal consent “making direct eye contact” specifically angered students and made students who have reported sexual misconduct uncomfortable. In his letter to the student body Dec. 16, 2020, University President Carlos Vargas said the slide, along with “all university trainings and materials” on the topic, were under review.

Mitten said the presentation including the nonverbal consent slide that upset students is no longer used, and the university is considering new modes of educating students. Changes being discussed include increased peer-to-peer education, continuous education and a resource center with alternative reporting methods for those less likely to report.

In February, past Redhawks Rising President Celeste Akoro said she met with Vargas along with Redhawks Against Sexual Assault (RASA) President Adelia Hancock. RASA was created in December 2020, a few weeks after Brady’s post, with the mission of advocating for sexual assault survivors on SEMO’s campus. When Akoro left Vargas’ office that day, she said she felt positive there would be change. Currently, Akora remains positive and believes she will see change “no matter how long it takes.”

As for Jenkins’ documentary, the video has more than 1,800 views on Youtube as of Dec. 12, and Jenkins said she has received multiple direct messages on Instagram from students wanting to thank her and share their own stories. Jenkins said she is happy to hear her video has helped people, even if it “just helped one person.”

For those who have experienced sexual and domestic violence, there are multiple resources available on campus and in the community, including university resources, campus counseling, Southeast Missouri NASV, Safe House for Women, Redhawks Rising, Iota Chi and RASA.